LOCAL CONCERT ALERT (Half Past), Stillbroke Concert Review, And A Silver Dream Update!

Good afternoon, one and all! Surviving the cold alright? Hopefully some metal news will warm you up! I have a LOCAL CONCERT ALERT and some news from Silver Dream, but first, my review of last night's Stillbroke concert!

The storms of last night were a huge impediment for people to make it out for this concert, at the most, there was about 20 people. I have no doubt that The Speakeasy would have been more packed any other night! But as I always say, concerts do get more personal when attendance is low, so I got to hang out with Stillbroke and family for a good portion of the night, which was cool! 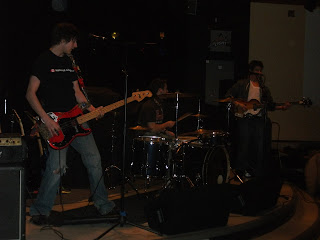 Around 10:15 PM, the show began with Band of Fury...just kidding, The Fury! And to be honest, this was the first time I've seen them live in over a year! They're unclassifiable by genre, but they played some pretty good songs! They opened with a cover of "Crank Dat" by Soulja Boy (Let's see another local band play that!), and later moved into originals. Compared to the last time I saw The Fury, they really seem like a tighter band, Paul Stanghetta has a solid singing voice, though I figured I'd hear more from Josh McNally vocally, seeing as he handles lead vocals in his other bands. Both are solid bassists too (Remember, there's no guitarist), and Joe Bumbacco was good all set on drums! The Fury won't be everyone's cup of tea, but if you want some unique fast punchy music, they'll do the job!

Then Stillbroke hit the stage, and they sure loaded up their return, they had 32 songs on their setlist! Along with the five songs on their EP, they played a good selection of brand new songs, never before heard locally! Add to that old unreleased classics like "Stillbroke" (the song) and "Sick and Tired", and tons of great covers, and you have one hell of a set! The covers were of bands like Metallica, Seether, Neil Young, The White Stripes, Alice In Chains, Jimi Hendrix, and many more! The new songs that I heard were very good, Stillbroke's talent is easy to spot, and they have some faster heavier new songs and a couple slow ones! Jesse Frigault led the charge on lead vocals and guitar, and he was great, though his voice didn't sound as strong as it did at the Kiss Battle. Just an observation, he still sounded good! His solos were great too, no worries there!

Sam DeDominicis was a great steady presence on rhythm guitar, I'd like to see how he'd handle more guitar solos though, I bet he could pull off some pretty well! Kyle McKey was great on bass and backing vocals, he also has a good singing voice and it's put to good use on some songs! Jenny Hooper was impressive on drums too, don't overlook her either! The band were very tight, and despite the attendance (blame the weather!), they looked to have a lot of fun last night! Also, thanks to Jesse for dedidcating a song to me, that was awesome! Sadly, I couldn't stay the full night (I wish I could have!), but it was great seeing Stillbroke after such a long wait! Not counting the Kiss Battle, it'd been over 9 months since I've been to a full concert of theirs, and it was great (weather notwithstanding!) Hopefully they'll be back for another full local show sooner rather than later, they're a bunch of nice guys (and girl), and they're an awesome band! Buy their EP too!

Did I get photos? Obviously! Click here to check them out, or visit the SMS Facebook page to find them there! And I did get a video, one of Stillbroke's brand new songs in it's entirety! It's a quickie but a goodie, check it out below, here's "Push Me"!

And now, for the LOCAL CONCERT ALERT!! Local hard rockers Half Past are finally returning to the concert stage! After cancelling their Boxing Day show at The Rockstar Bar, they will be playing not one, but TWO shows at Foggy Notions NEXT WEEKEND! One on Friday February 5th, and another the night after! These will be Half Past's first shows since backing up Frightlight at Coch's Corner on Halloween! Neither show has a cover charge, they are listing a 10:30 PM start time. Confirm your attendance for either/both of these shows at the official Facebook event pages! Pencil me in for the Friday show (Saturday is UFC), I haven't seen Half Past since 2008 in the Fingerbone era, and they really are a great band, I can't wait! Hope to see you guys there too! If I hear anything more, I'll let you guys know!

And finally, another local band is looking for a new member, but there's some urgency in this case. It appears that Silver Dream have parted ways with drummer Matt Hicks, so they're looking for a replacement. However, the band have put a self-imposed deadline of Valentines Day (February 14th) to find a new local drummer. In the event that they have none by then, they plan on looking elsewhere in Ontario for a drummer. They want to head to Hamilton to get a record deal, and drummer or no drummer, they wanna do this soon. I'd love to see a local get on board with Silver Dream, so I'll do my part! If you or someone you know are interested in drumming for the new local hard rock band Silver Dream, message frontman Matthew Silver on Facebook A.S.A.P.!!!!

That's all for now, stay tuned for news as it happens! Next week will be packed, so look out for my review of Detroit's "Brace For Impact", my second installment of profiles of out of town bands with local members (Papa Fogals Chair and The Sexual Vigilantes to be exact), as well as reviews and videos from the upcoming Sykotyk Rampage and Half Past concerts! Stay tuned!
Posted by The Sault Metal Scene at 12:24 PM

We have vanilla Ice covers?

I heard Ninja Rap in the one song, did I not?

Very cool to see you give some good press to a very talented band. The Fury are three very talented people who get better and better. Their sound is new and fresh and it kicks ass with no sappy B.S. Many people feel this is what is needed in music today.They may not be everyone's cup of tea, but the more your see them the more you love them. I wish we could of made it to the show, again , thanks for the review...keep your eye on these guys.

Hey it's no problem at all! Great show!