A New Local Hard Rock Band, The End Of Turner Up, And New Videos!!

For our 22nd straight day of new SMS updates, we have even more recent news to share, so what's in store for this post? We have new original songs from a (presumably) new local grind project, plus new solo guitar covers from a recently active musician, but first, we have a brand new local band to plug, and the band breakup leading from their inception, so read on below for what you need to know! 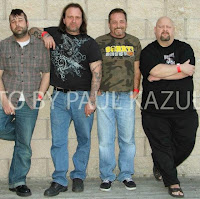 A new Sault Ontario hard rock band has been formed, and they are named The Thrill Junkies! Their lineup features Turner Up/Havadder bandmates Travis Sharpe on vocals (switching from bass), Robert Brown on guitar, and Scott McLurg on drums, along with Havadder-only guitarist Jason Nisbet, and new bassist Jamie Cameron, who may be more familiar for his work in country acts like Double Barrel. As you may have surmised by the formation of a new band with so many members of both bands (and the absences of Krista Marshall & Jason Roy), both Turner Up & Havadder have apparently parted ways after their own prominent local runs. According to Scott in a recent Facebook e-mails, both bands "have gone their separate ways to work on other projects", and though he didn't go into specifics on what happened with either band, neither have played live or issued public updates in 2013. Scott also told me that The Thrill Junkies will be heavier (indicating a sound closer to that of Turner Up and the older bands that Travis fronted), and they'll cover everything from Alice In Chains to Judas Priest to Volbeat in this new project.

The Thrill Junkies don't have online pages or media yet, but Scott did say that their live debut will take place on April 6th in Spanish, Ontario (3 hours east of the Soo), where they will play in a battle of the bands for cash & an opening spot at this year's Rock 'N Roar Festival there in August, where they could open for bands like Loverboy, Streetheart, and Sweeney Todd! An out of town debut may seem odd, but this is familiar ground for all but Jamie, as Havadder took fifth place in this same battle last year, earning them a slot opening for Lou Gramm of Foreigner at the festival. I'm very curious to hear how The Thrill Junkies sound, especially with Travis' return to full-time local singing, but when more details come in on their local debuts, online pages, and posted media, we'll be sure to have them here, and wish them the best in three weeks when they rock Spanish! Of course though, it is sad to see the end of Turner Up's second incarnation after a successful year back, and Havadder had occasional hard rock covers of their own in their five year run, so best of luck to Jason Roy & Krista in the future, and hopefully both turn up in new local music projects soon!

We'll close with some new videos, including two new solo performance clips from Ashes To Dust guitarist Alex Hemy's YouTube channel! Uploaded over the past couple of days, these are covers of 10 Years' "Wasteland" and (as embedded below) Breaking Benjamin's "So Cold", and both are similar to his other recent videos, albeit with a new channel logo bug & a 30 second clip of his "Toxicity" cover at the end of each, likely to encourage new subscribers. These are dependably good covers, with the multiple camera angles and lighting working to each song's advantage, so give Alex's version of "So Cold" a look below, and see more at the above links!

Finally for today, here's some new local grindcore songs from newer local label Blood Shed Productions! In recent days, the label led by Crucify The Whore's Ringsnaps Gibson has uploaded a few new songs to their YouTube channel, mostly from affiliated local rappers, but two songs were posted from a grind act named Tomgrindy, of whom I know nothing beyond the songs. The songs are a self-titled track & "Grind In Your Mouth", and both are very short, of mixed quality, and feature pig squeal & guttural vocals. The self-titled one has more substance & a solid melody compared to the other track, which has just a tinny drum beat, and I can't really judge without hearing more/longer material, but if you wanna hear some new local goregrind, check out the song "Tomgrindy" below, and check out more B.S.P. material above!

That's all for today, but stay tuned for more news this week, plus this month's YouTube Channel Profile on Friday! Thanks everyone!
Posted by The Sault Metal Scene at 12:00 AM