As we approach the holiday weekend, there's no end in sight for the recent influx of news, so what's on the docket for this Thursday evening? Along with a cool archive metal album discovery, we have LOCAL CONCERT ALERTS for a prolific U.P. band's next regional gigs, and previews of that same band's Easter weekend gigs, but first, here's a new band discovery to eventually add to our band links, so here's what you need to know!

We have a "new" band to add to our inactive Sault Ontario band links, and they're the mid-2000s local metal quartet Batteries Not Included! Active primarily from 2003-2004, we've alluded to them on the SMS in the past, but I just discovered their Angelfire website yesterday, so only now are we adding them to our links. Their lineup included a few notable musicians from more recent local bands, including future Free Beer/M.O.B. & Creatures of the Night bandmates Keith Gagnon & Ryan Gray, and current Asylum Country drummer T.J. Case, alongside guitarist Ian Connell, who I don't believe has had any major later band roles. Though their website says that they played "a lot of vintage rock and older music", they were definitely heavier skewing, as David Helwig's SooToday article on them from August 2004 mentioned that they covered Metallica, AC/DC, and Ozzy Osbourne songs. Visibly active during the members' youths, their live shows appeared to primarily take place in mid-2004 at outdoor venues like The Roberta Bondar Pavilion & The Bellevue Park Bandshell, before likely disbanding by early 2005.

I can't add a whole lot on Batteries Not Included, as their website is full of dead and unfinished links, and I can't find any media of theirs, but the members are talented judging by their later work! In a way, they remind me of Garage Inc., in that they're a young metal band who played notable outdoor gigs and later dispersed into more successful non-metal acts, but that's likely just coincidental. Check out Batteries Not Included at the above links, and when Blogger's link add-on issues get fixed, they'll be listed on the site!

Next up, here are some LOCAL CONCERT ALERTS, as Kinross classic hard rock quintet Banned have announced a bunch of new regional concert dates through the summer via their most recent Facebook statuses! Among the new shows, they'll return to The Sundown Lounge in Pickford (a half hour south of the Soo) for concerts on April 13th & August 3rd, while they've booked more dates at one of their favourite recent venues, Todd's Tavern in Moran (a half hour northwest of St. Ignace) on April 20th, May 4th, and May 25th! While no strangers to Todd's Tavern in recent months, the April 13th Pickford date will be their first at that venue in 8 months, and as a result, their first with their current lineup. All likely have 21+ age limits and no announced cover charges, and while the Sundown Lounge dates have 9:00 PM start times, the Moran shows will start at 8:00 PM, as is usually the case. Check the above links for more details!

It's nice to see a whack of new Banned show announcements, and I'm most surprised to see a confirmation this far ahead for August! It is sorta weird though that none of the dates are for full two night weekend engagements, but they've never been as exclusive to that concept as some other recent hard rock bands across the river. However, they do have a full weekend of music planned TOMORROW & SATURDAY NIGHT, so here's our only hard rock/metal concert previews for the Easter weekend! The aforementioned Banned will make their first ever appearances (I think) at The Rapids Lounge at the Sault Michigan Kewadin Casino tomorrow & Saturday, which will cap off a busy month of concerts from this prolific band, and hopefully their current lineup brings some great and varied metal/hard rock covers to the table at the Sault Kewadin! These shows have 9:00 PM start times, you must be 21 to attend, and there's no announced cover charge. Again, check the above links for more details!

These should be some good shows, so keep Banned's Kewadin Casino debuts in mind this weekend, and for a preview, here's Banned covering a Carrie Underwood song recently, but click here for heavier covers with older lineups! 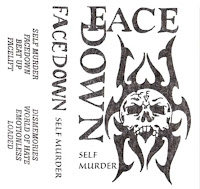 Finally for today, here's a neat find that you don't see enough of: A local metal band's cassette tape in full on YouTube! Back in the day, cassette tape albums were more common than CDs, but even some of the more obvious or notable ones (like Proposition 86's cassette or the Amethyst release with "Waste of Time") are extremely difficult to find nowadays. However, at least one metal cassette-only album has been posted on YouTube, and it's "Self Murder", the 1997 release by the defunct crossover/hardcore band Facedown! If I remember correctly, there were two local bands with this name, but I don't think it's the one that former Motion Carried drummer Jamie Whalen was in. I actually received this whole album in mp3 format a couple years ago from current Destroilet guitarist Christian Foisy, but I never did anything with the songs for SMS purposes because I didn't have a label scan to compliment the album for public uploading. No matter though, as YouTube user Richard Dryfist took care of that when he uploaded the album last month, but what do we know about it?

Uploaded as part of a playlist at this link, the 8 songs are "Self Murder", "Facedown", "Beat Up", "Facelift", "Dismemories", "World of Hate", "Emotionless", and "Loaded", so click each link to check them out! I'm unsure of their full lineup, but this is a great find, and whoever Richard Dryfist is, kudos to him! (He also uploaded a Canadian punk compilation featuring a Spigots track too.) As this is a full local metal album that I have access to, I do wanna review it on the SMS (hopefully after I learn a bit more on them), but there's some quality hardcore punk and crossover sounds in these 8 tracks to enjoy, so check everything out at the above links, and here's the cassette's title track!

That's all for today, but stay tuned for more news & notes likely tomorrow! Thanks everyone!
Posted by The Sault Metal Scene at 7:13 PM