Our recent busy stretch at the SMS continues tonight with some more news and notes, so what's on tap? Along with some updates to the layout of the site in recent days, we also have some new audio tracks to share from some heavier local projects, but first, here's a LOCAL CONCERT ALERT for a very familiar band's return next month!

Just four days after their well received return to Sault Ontario, Hamilton hard rock quartet 40 Sons will return to The Rockstar Bar on April 5th for their second local concert in just over a month! I've heard fantastic things about their sound, energy, and professionalism from their show on Thursday, and this is an awesome bonus to add to the end of their Hurricane tour on their way back from Manitoba! Such a quick turnaround isn't entirely new for 40 Sons' local dates either, as they played Coch's Corner gigs 3 months apart in late 2009 & early 2010. Beyond the Friday placement, there will be one extra difference on April 5th: a local opening band, as hard rock quartet The Suicide Kings will play their first (likely) Rockstar Bar gig in 2013 to open for 40 Sons! Their first non-headlining gig since Toystock, their mix of hard rock originals and varied covers should lend itself really well for this show next month, and it'll be great to see them back at it! Like their show here on Thursday, the April 5th 40 Sons gig has no cover charge, a 19+ age limit, and a 10:00 PM start time. For more details, visit the official Facebook event page!

I think I'll have to swing by The Rockstar Bar on April 5th to check out the action, especially with all the positive buzz from last week! Hopefully both bands are awesome, and check the above links for more details! 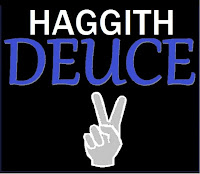 Next up, here's the latest updates from local grunge band Haggith and their drummer Mike Haggith's solo project! Both have uploaded some new studio material onto their respective Facebook pages, including this new Facebook video of Mike Haggith's solo original "Drown" (well, an instrumental mix of it), as to be featured on his forthcoming 46th solo album "The Present Din". Without giving anything away, the song is softer like his indications of the album's overall sound, but it does build late. I fully expect to review this album later this year upon it's release (maybe in the summer?), but for now, give the "Drown" demo a listen at this location! As a Facebook video, I can't embed it here, but this I can, an audio recording of the Haggith band's original song "Loverbeam" from their upcoming album "Deuce"! Wrote by singer/guitarist Curtis McKenzie's brother/old bandmate Travis, it's a 2 minute original from the guys (minus bassist Caleb Cachagee for unknown reasons), as uploaded to their YouTube channel on Friday.

Fans of Haggith's earlier hard rock/grunge material should enjoy this short rocker, so check out Haggith's new studio track (recorded at PaperClip Productions) below, and stay tuned soon for more news and notes from (Mike) Haggith as it rolls in!

Also in new audio tracks on YouTube, newer Sault Ontario goregrind project Crucify The Whore uploaded a new song named "Fisting Your Nephew" onto label Blood Shed Productions' YouTube channel on Saturday! Off of their newest demo "Fetel Pig Dissection", it has a fuller & heavier sound than their past originals that I've heard (despite it's 64 second length), but the pig squeal & grunt vocals are still an acquired taste. Note that due to some of the imagery on the demo's cover art (including a dissected pig, a'la the demo title), I've embedded just the audio here, but you can still click through to see the full video if you want. Though I'm not offended personally, I don't want to risk offending any readers who may be sensitive to some of the imagery, but no offense is meant to Crucify the Whore or Blood Shed Productions! I appreciate what they're doing and respect their stances on their music and artwork, and if you're up for some new local grind/gore music, check out C.T.W.'s new song below!

Finally for today, I wanted to address some recent changes to the layout of the SMS. If you've noticed some minor additions and removals, it's just to balance out the Sault Ontario & Sault Michigan sides of the page, and better categorize certain links. The "Other Local Metal Links" sections on either side were too large and text-heavy for easy navigation, so I moved a bunch of links from there into their own categories in between the band links and "other" links, so what's changed? I added sections for local music festivals on both sides of the border, and for just Sault Ontario, I added link categories for local internet radio stations/podcasts, local concert/musician photographers, and inactive local concert venues with surviving online pages, with link changes & edits where needed. I also moved our monthly polls onto the right-hand side of the page (and added a section there devoted to links to SMS pages on other websites) to help balance out the two sides, as Sault Michigan still has a lot less links and features. Hopefully this makes things easier to navigate and group, so check things out and see what you think!

That's all for today, but stay tuned for more news in the next few days as we continue a busy stretch to lead off the month of March! Thanks everyone!
Posted by The Sault Metal Scene at 12:47 AM