Alright, it's time to continue this weekend's Halloween concert previews, and all but one will be cleared out on the metal/hard rock side of things after today! I'm gonna wait to preview Late & Loud's show on Monday, as it's kinda early to do it yet, so for today, we have a SHORT NOTICE LOCAL CONCERT ALERT, a longer preview of a major Halloween tradition's return tomorrow night, and to fill things out, some big news from Woods of Ypres, so here's what you need to know! 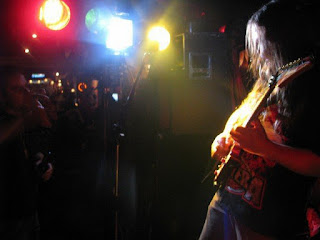 After an off weekend, Caveman Morrison frontman Tym Morrison will return to Service Grill Pizza TOMORROW NIGHT for a night of acoustic hard rock hits! While his Caveman Morrison bandmates rock Coch's Corner with Redundant (more on that in a second), Tym will have lots of metal and hard rock covers in store for his fans at The Service Grill tomorrow night, as he often has this year! Apologies for the short notice on this show, it was just announced yesterday. If you want some good pizza and beer, or if you just want some lighter entertainment for the Halloween weekend, Tym will be sure to fill your needs tomorrow night, so keep his show in mind! There's no announced cover charge, he'll be on at 8:00 PM, and though I don't believe there's a cover charge, be wary just in case. For more details, visit the official Facebook event page! Sounds like fun to me, so hopefully lots of people turn out tomorrow night to rock out with Tym Morrison! For a preview, here's him and former Half Past frontman Luke LeBlanc covering Extreme's "More Than Words" a few years back!

Now to the other Saturday nighter for your Halloween weekend activities, and it's the 6th annual Coch's Corner Halloween Party TOMORROW NIGHT! Presented by Johnny Pints & Coch's Corner, this yearly tradition has rocked the Days Inn bar since 2006, and the spirit of the Halloween season will be in full force tomorrow night with decorations, the right ambiance, a costume contest, and so forth for you Halloween revelers. And yes, there's music to be had, with your headliners being local horror punk/metal quintet Frightlight! Just days after opening for The Misfits in Toronto, these local mainstays will rock the stage with their trademark horror-injected originals for a third straight year, so don't miss them! Also, this will be their first ever local concert with new drummer Chris "FreakNStein" Thompson (Half Past), so welcome him to the band in style tomorrow night! As for openers, one of the bands will be local punk trio Redundant, who'll have a series of exciting punk covers to rock fans with tomorrow night! Note that Redundant have replaced the previously announced 'T. Rex Manning" on the bill, as per this Facebook event page. No reason was announced for the change, but given that I couldn't find a single thing on T. Rex Manning", maybe they're one & the same as Redundant? If I find out, I'll let you guys know!

The other opening band is named The 151s, but aside from a likely Bacardi reference in the name, I know nothing about them. I wanna say that they're one & the same as The Mothermakers from last year, who seem to only play at Coch's Corner Halloween parties under different names and genres, but I don't know for sure. If I find anything, I'll let you guys know! With this special Halloween theme and all that's going on, there will be a cover charge of $5 tomorrow night, which isn't typical, but it's well worth it! You must be 19 to attend, and it all starts at 9:00 PM. Check the above links for more details! I guarantee I'll be at this year's Halloween party, and how could I miss it after how good last year's was! It's slightly more punk-centric than last year's, but there's tons of good music to go around, so hopefully I'll see you guys there to rock the Halloween weekend the right way! Hope to see you guys there, and for a preview, here's Frightlight playing their song "World War Z" at last year's Coch's Corner Halloween Party! 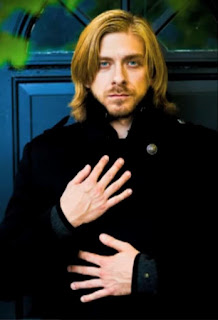 Alright, with the next couple of concerts previewed, I'll close with a really cool find for you guys today, and it's a brand new Woods of Ypres song! This was uploaded onto their label Earache Records' YouTube channel yesterday, and it's called "Career Suicide (Is Not Suicide)" from the forthcoming "Woods V: Grey Skies & Electric Light"! This is an advance mix of the track, and it's the first audio sample of the album we've heard in advance of it's planned release on January 30th (that's new too!), but how does it sound? I'm holding my complete thoughts until I review "W5" in early 2012, but I will say this: It's slightly different in sound than you may expect. Not as gloomy and doomy as much of "The Green Album" was, but David Gold's voice goes places it hasn't before, and Joel Violette's guitar solo sounds great! For the record, it's higher in the mix than Bryan Belleau's usually were on "W4", which is promising! I'll say nothing more for now, but if you're craving some new Woods of Ypres material, give "Career Suicide (Is Not Suicide)" a listen below, and stay tuned for more "W5" updates as they roll in!

That's all for now, but stay tuned for more news this weekend, along with our next CD review (we're probably going really old school this month), possibly a review of a concert tonight, a definite review of the Coch's Corner Halloween Party, our Late & Loud concert preview, and much more! Thanks everyone!
Posted by The Sault Metal Scene at 1:41 PM

@ the new woods of ypres song.. its growing on me. to me this is like 'wet leather' off woods 4. by that i mean i think its the single, the catchy tune, the money maker. im hoping the rest of the album has more meat. altho i am expecting this album to have little to no filler as i hear its going to be like 10 tracks @ 60 mins. i just hope it doesnt come off as restrained and too commercial. altho, if the band finds success with that i will support them either way!!

I need to listen to it more to get a clearer thought on it, but I have a feeling this won't be representative of the whole album's sound, for better or worse. I don't hate it, but I'll hold fuller thoughts until the CD review, and I can't wait to hear the full CD!