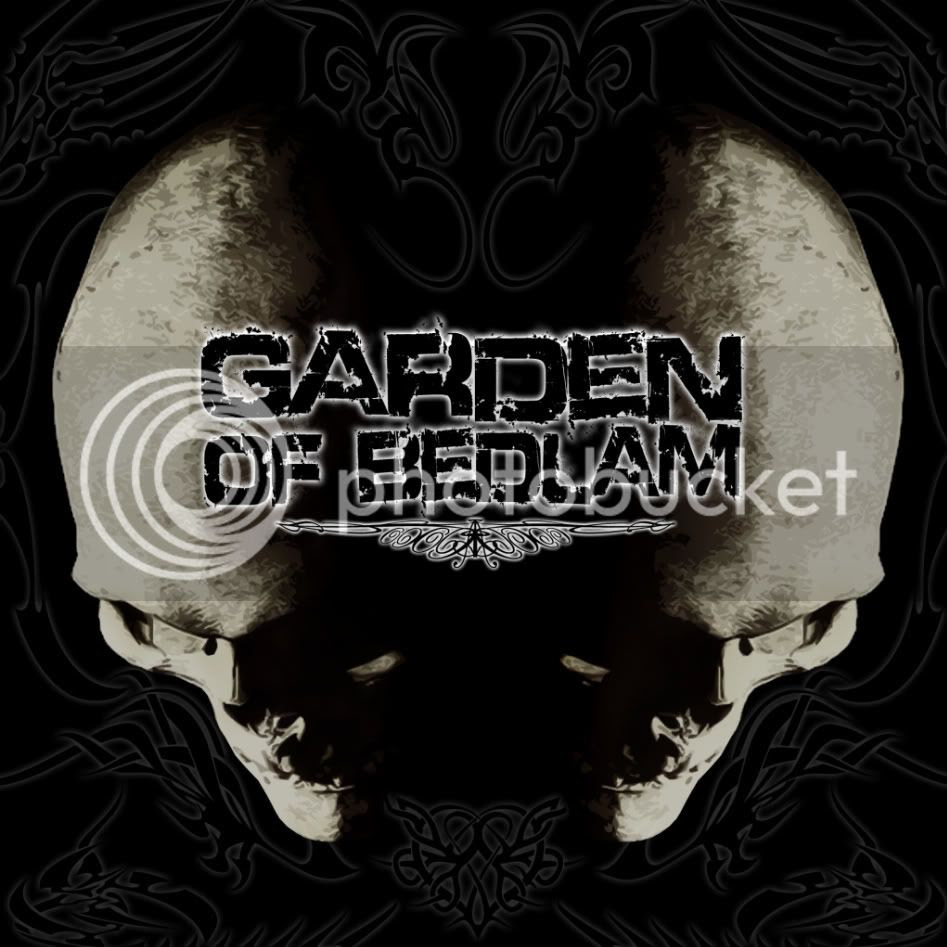 Hey guys, it's time for my 11th monthly SMS CD review, and as promised, it's time to take a second, more in-depth look at Garden of Bedlam's debut self titled EP. Released in April 2009, it was recorded and mixed at Stereo Soul Studios with producer Miguel Gauthier, and later mastered at Toronto's Silverbirch Studios by Andy Krehm. Currently, the album is available to purchase at The Rad Zone and at the band's concerts, and though I highly recommend you buy the EP and support the band, the four songs on it are all streamable at Garden of Bedlam's official website and at their MySpace page if you want to check them out there! The EP features the band's original and current lineup, including Erik "Buzz" Boissineau on vocals, Josh Belleau on guitar, his cousin Evan Belleau on bass, and Derek Turner on drums! Four songs on the EP, let's start with the opening track! (Updated on September 28th, 2012)

"Stand Your Ground" is the first song on the disc, and it starts with a catchy intro that eventually picks up in speed and heaviness, with some really good drum work and a nice melody to it! When the singing picks up, the song takes a more confrontational stance, with Buzz singing with a lot of melodic aggression. He's always impressed me as a singer, and he shows it on this song! The lyrics are nice and violent, but very repetitive, and though that works to sing along with, I could have stood for more diverse lyrics. The instrumentation is good, but it seems lower in the mix, like someone turned it down a bit during the singing. Live, this sounds a lot heavier and crunchier, but that's not to detract from the song at all, it's really good! It's a perfect "rally the crowd" sort of song, it could fit very well as fight music! As a song, the only things I'd change would be the lyrics and the addition of a guitar solo, but in studio, it's lacking something from the live Garden of Bedlam experience.

Second is "The Truth Shall Set You Free", which has a nice intro that sets the mood for the verses, not too heavy, but guitar driven and melodic! You know at live shows when Buzz cracks out his megaphone? This is the song I'd say they're most known for using it with, and it shows in the verses, with the vocal effects really standing out! Derek's drumming is really good on this song, he has some great fast sections underlying the singing, it's not easily noticeable, but it adds to the song! The guitar work from Josh Belleau is constantly good with some cool breakdowns during instrumental sections, but as in "Stand Your Ground", I really wish there was a guitar solo! The song isn't Garden of Bedlam's longest, heaviest, or fastest, but it has some very nice melodies and good lyrics! When it comes to things to praise on this song, none go higher than to Buzz, who shows off his very impressive vocal range here! He hits some pretty high notes, particularly that falsetto at 2:43...just listen to it! I like this song better than "Stand Your Ground" on a musical basis, though it's not as mosh-worthy, if that's your thing.

Third on the EP is "Shallow", and with apologies to Buzz for the comparison to another band here, but there is a definite System of a Down-like quality to this song that I like! Not so much the chorus, but the verses definitely have that kind of S.O.A.D. effect, kinda bouncy and fast paced! Derek's great on drums again, and I like the kinda funkier guitar work on here too! Thankfully, we finally get a guitar solo on this song, and it just proves how great of a guitarist Josh is, though I wish it was a touch longer! The song is about standard structure when you look on it, but the sound of it is probably the most unique of the four on the EP, and though I like it, it doesn't have a ton of originality that really identifies it as "their own", so to speak. That's not negative though, it's a catchy number that will get you moving, and it's heavy enough to mosh to, especially late in the song!

The disc's final song is "Sovereignty", which is absolutely my favourite of the EP! It starts off with an awesome bass intro from Evan Belleau, on what is hands-down his best performance on the EP! Bassists don't get enough credit, and he deserves it here! This is the longest song on the disc, and Garden of Bedlam make the most out of it, with come nice chugging riffs and solid aggressive vocals throughout the verses! The chorus has a great sing-along quality, nice and melodic and very catchy! Luckily, we get another guitar solo from Josh here, and it just adds to my enjoyment of his work, and wishes for solos on the first two songs. The song doesn't take a ton of risks, but it doesn't have to, it's easily the catchiest and most memorable track on the CD. Also, it's the song that most sounds like "Garden of Bedlam", it has an overall original feel and style that just mesh together so well. It's heavy and unrelenting, yet accessible enough for anyone to enjoy, and it's the perfect capper to the disc!

So how do I rate Garden of Bedlam's debut EP 13 months after I first looked at it? In ways, I think it's grown on me even more so, and I loved it then too! One might be tempted to assume I'd be comparing it to their new slate of songs that will be on their next album, like "New Rain" and "Torment", but it'd be unfair of me to judge songs like that. I want to enjoy their original material on it's own merits, and on that basis, I really enjoyed their debut disc! It was an excellent first step into studio recordings, and the songs mostly sound very good! Buzz shown off his amazing vocal abilities, Josh played the hell out of his guitar, Evan had some excellent lines throughout, and Derek kept the beat on drums exceedingly well! At the same time, while I really enjoyed the E.P., I have reservations about it. Sometimes, the vocals seemed to overpower the instruments. But compared to some local albums I've heard, it wasn't nearly as bad, I'm just stating a minor observation. The first two songs really could have used a guitar solo, Josh has the chops, and I bet a solo would be a great addition to both! I also found the lyrics got repetitive in areas, notably on "Stand Your Ground".

I'm not trying to criticize the E.P. at all, I'm just pointing out things I noticed that could have been fixed up. The E.P. was honestly a lot more than I expected, the quality is great and the songs are all really good or better! And keep this in mind: This was their first album of any type. They're even better now than they were then, and they were awesome then too! Actually, when you hear the four songs on the E.P. at recent live shows, they're actually heavier than on the E.P.! Remember, that's not a detraction to the studio recordings, because those are fantastic, and more than I could have asked for from their first CD! If you want to hear some great heavy metal that hits a wide variety of genres and will get your head banging, Garden of Bedlam's self-titled E.P. won't do you wrong at all. Buy it today!!!

(Oh, and as an aside, I have a minor pet peeve: No lyrics in the album booklet. I love to sing along with songs I enjoy, and if I don't know the words, I'll more than likely look like a fool singing the wrong words. No worries though!)

So there's this month's album review! As I said in yesterday's post, I'm not revealing my June CD review yet, I'm going to wait and see if any bands release an E.P. or C.D. in the near future. And if none do, I'll see who's playing a local hard rock/metal show next month, so I can link a review to a band or performer. All I'll spill is that it will likely be a Sault Ontario release. Let the speculation begin! I have a news post coming up likely tomorrow with more assorted updates, and stay tuned in the near future for the our next SMS poll, my review of "Castle Stories: A Rock N' Roll Scrapbook" by Duane Roy, the next profiles of out of town bands with local members (Human Disorder and Summon this month!), and any local metal news, previews, concerts, and updates that I have! Stay tuned!
Posted by The Sault Metal Scene at 3:11 PM

All songs dont need solo's. Alot of songs are great witout solos. josh has all the chops needed to make a song sound great.

Any idea what the lyrics are for The truth shall set you free? I have been trying to figure them out! Especially what is whispered at the intro of the song