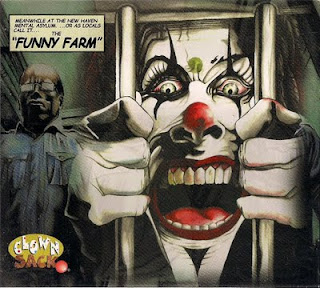 It's time for our 22nd monthly CD review at The Sault Metal Scene, and after a two month stretch of archive reviews, we have a brand new album to take a look at for the month of April! This month's review is of inactive Sault Michigan hard rockers Clownsack's only EP and final release "Funny Farm"! The band's second CD following 2006's debut full length album "Rotten Candy", it was recorded over the past two years and completed earlier this spring. Produced by Fran Blackwood with drum production by former Clownsack drummer Bob "Orb" Helsten, the album was independently released earlier this month. "Funny Farm" features Clownsack's 2008-2010 lineup, including Schloppy on vocals, Butter Cookie on guitar, Slappy on bass, and Skronko on drums, in his only appearance on a Clownsack album. Note that the band's final second guitarist Sparxx is not on this release, likely having joined after guitar tracks were recorded. Like with my review of "Rotten Candy" last year, note that Clownsack dressed up as & took on the names/personas of clowns, without public mentions of their real identity, so I will again honour that in this review.

Likely not in print currently, I believe limited quantities of "Funny Farm" can be purchased at Grooves Music, while their MySpace page has the whole EP available to stream, but keep your eyes peeled for other physical/download copies! Only 5 songs here, clocking in at just over 20 minutes in length, so let's begin this review with the first track, "Bring It On"! (Updated on November 8th, 2012)

"Bring It On" starts with thunderstorm sound effects and background screaming before the opening riff kicks in, which is catchy! Schloppy's vocals come in out of nowhere, and just like on "Rotten Candy", he brings that solid voice that has a punk-ish edge to it, but here, he seems to be singing a bit more aggressively than I remember. Actually, the song as a whole is fairly heavy compared to their 2006 material, especially thanks to some very heavy riffing from Butter Cookie! The first verses are pretty good, but not too varied beyond the guitar work. 1:40 into the track, we get a bit of humour as Schloppy announces an MMA matchup between a clown and a mime before launching back into the song! On it's own, "Bring It On" is a very nice song, but it's too short (less than 2:30 in length) and except for the "Clown vs. Mime" announcing break, it's fairly predictable once you hear the first verse & chorus. That said, it's also heavier than most of the past Clownsack songs I've heard, seemingly eschewing many of the funk sounds they had on "Rotten Candy"! Good sign, especially with longer and hopefully more substantial songs to come on the disc!

Second is "Blow My Big Top", which restores some funk from the get-go with a nice (though short) bass solo from Slappy before unleashing the rock! From the start, this resembles more classic Clownsack than "Bring It On", including some sexual innuendos and some bouncier and more energetic verses! Slappy really shines here, and Schloppy's vocals work well, but I have to say, the choruses don't get me as much. They're too slow and reserved, almost like an intended tone wasn't achieved. The chorus of "Clown Sauce" (for example) fit way better, I'd have made it more energetic and higher tempo. Aside from that, "Blow My Big Top" is a great song that flies by while you enjoy it, and the band (chorus aside) are on the tops of their games! I'd like to see a guitar solo from Butter Cookie, but hey, you take what you can get. Awesome song, definitely give it a listen!

The third song on "Funny Farm" is "I Live In A Drawer", which is about, well, living in a drawer! The song has a bouncy and poppy sort of riff that also manages to be heavy, with noisy drums mixed in! Good stuff, but everything seems to blend together, especially on the chorus. That said, te choruses ratchet up the heaviness compared to the verses, and they flow really well together! 1:04 into the song, we finally get a Butter Cookie guitar solo, which is really cool, though it almost seems a bit muted, and it comes earlier than you'd expect in the song. Schloppy's vocals, though mostly on one note, match the tone of the song really well, and show off his aggressive "talking" singing excellently! At just over 3 minutes in length, they still manage to pack everything into this song, including some false endings & enough variance to satisfy fans of their harsher and funkier material alike! Good stuff!

Fourth on the EP is "Ice Cream Man Cereal Killer", which is about, well, an ice cream man who's also a serial killer! A slower song compared to the first three, the verses are very reserved with funk bass and minimal instrumentation otherwise, with some interesting vocals. The choruses ratchet back to a heavy pace, with Schloppy's pseudo-rap vocals meshing well with the very heavy riffing and some nice licks from Butter Cookie! The verses strike me as a mood breaker though compared to the choruses, almost like this song is the opposite of "Blow My Big Top." 2:30 into the track, Butter Cookie unleashes another solo, which is longer, more amplified, and very well played! The ending is abrupt though, which could have been fixed. Not the best song on "Funny Farm", but the amusing lyrics, choruses, and guitar solo help it to get a passing grade!

The EP's final song is "Down", which is by far the longest song on the disc, clocking in at 7:10 in length! The song starts off really heavy, with the riffing actually sounding like it's going downward. Schloppy's vocals seem very reserved, with him mostly clean singing for the verses and choruses at different vocal levels. The band seem to be playing on a lower level too, it's not really a heavy track overall, but just enough to make it a rocker. Skronko's drumming's good, but everything else until Butter Cookie's solo 2 minutes in just seem on a down note, like the song's title. Great solo though! You'd assume the song would be ending after 4 minutes, as it had your usual song structure and seemed to be leading to a fade-out, but boom, there's some nice "upward" sounding guitar sections leading to another guitar solo, and a long one at that! Where were these on the first two songs? Around 5:30 into the song, things start slowly fading out, concluding "Funny Farm" with more screaming, thunderstorm sounds, and random horror sound effects, ending with a clown horn honking. Strong ending to this song, though it really felt like an extended version of what should have been a 4 minute track. The ending was solid though, and everything came full circle!

So what did I think of Clownsack's second CD? Well, I give them credit for seemingly making their sound heavier than on "Rotten Candy"! I guess in the five years between albums, they wanted to go that route, and for the most part, it works well! The band sound on their game here, and they continued to exhibit good chemistry! Whether singing or almost rapping, Schloppy's vocals complimented each song well, and he always shown a suitable attitude with his performances! Butter Cookie was outstanding on guitar for the most part, though his solos would have been welcome on more than just the last three tracks. He will be missed in Clownsack, his guitar work was a clear asset! Slappy's bass playing was funky and was great on each song, ensuring some good bass lines and low notes on each track, and Skronko's drumming flowed well on each song! Never too in the way, but always worth hearing, he's filled in for Scratchy (and Orb) well! "Blow My Big Top" and "I Live In A Drawer" were my highlights of the EP, but each song has their plusses, and you'll likely have your own favourites!

It's not a perfect release though, but no album is. I missed a lot of the funk influence that populated "Rotten Candy", and I felt at times that the heaviness was at the expense of removed funk elements. At times, the guitar playing seemed muted, and these tracks seem like they could use Sparxx to add another guitar layer, like I assume they have when played live. "Down" & "Ice Cream Man Cereal Killer" were too reserved and drawn out than they could have been, and "Rotten Candy" overall seemed to have a higher humour content than "Funny Farm" does. I think the short length doesn't help either, and after five years, why not make this a full length CD? The lack of enclosed lyrics and an "outtake" section were missed too, but those are minor. Still, I really did enjoy "Funny Farm", which shows Clownsack's increasing heaviness and the band's collective talents really well, and I can't wait to hear more! With more of a balance of this new heaviness level and their funk influences, their next material will be even better, mark my words! Definitely pick their new EP up whenever details come out for it, and thanks again to the band for the credit in the liner notes!

So I hope you guys enjoyed this month's CD review! As previously revealed on the SMS, our next CD review will be of Destroilet's debut EP, which was only just released this past weekend! To ensure a quick review and lots of time to see if more new albums come out for our summer review season, I will be reviewing the Destroilet EP NEXT WEEK, in the very first week of May! Stay tuned for that, and as new albums come out, I'll let you know about them! That's all for today, but stay tuned for a weekend concert preview post tomorrow, another Woods of Ypres-centric post, and more as news becomes available! Thanks everyone!
Posted by The Sault Metal Scene at 7:34 PM