It's time for our 37th monthly local metal CD review at The Sault Metal Scene, and today, we're looking at a Sault Michigan band's album for the third time in the past four months, and that is "The Dawn's Early Light", the new album from local classical metal outfit Theatre of Night! Independently released on July 1st, it's the band's second album following 2010's "Christmas Night" and similarly to it, "The Dawn's Early Light" is an instrumental concept album, this time themed around American patriotism & the United States Armed Forces, including many renditions of classic American songs and compositions. Featuring most of their current lineup, including guitarist/bassist Steve Giles, his brother Greg on drums, and Craig Harrison on the keyboard (singer Gaby Koss isn't featured), this album can be purchased via digital download from Reverbnation, iTunes, and Amazon for prices ranging from around $7-$9, but note that Reverbnation offers the best deal, so check the above links to do some shopping! Also note that some previews of the individual songs are also available on their pages and YouTube channel, and partial proceeds from sales of "The Dawn's Early Light" will go to The Folds of Honour Foundation. With about 38 minutes of music across 9 tracks, let's begin with this review with the fitting first song! (Updated on November 8th, 2012)

First is Theatre of Night's rendition of the American national anthem, "The Star Spangled Banner", and after an intro that somewhat calls "Welcome Home (Sanitarium)" to mind, it leads into some softer slower guitar playing and melodies that help to build into the traditional anthem rendition, and filling things out definitely makes sense to make this a lengthier track! Steve's guitar work to the melody of the anthem is great, and it makes up well for the lack of vocals, while Craig & Greg keep things heavy and well paced in the background, though the added ending feels somewhat out of place, and not of the same heroic American mood of earlier. Still, this is a well done extension of the U.S. national anthem, and in the middle, it strikes a great balance between metal heaviness and respect of their roots! Second is their version of "The Battle Hymn of the Republic", and from the start, Theatre of Night stick close to the original, though in a slower pacing with some extra guitar flourishes and suitable drumming, and with such a recognizable melody, it's hard not to get caught up in this track! That said, it's not overly heavy, but that goes with the song's mood. The orchestration at the end is a cool touch, and the callback to marching drummers, but this song probably could use vocals, as without them, it gets a touch repetitive for a song of it's length. Effective cover, and it strikes the right chords, but most metalheads will prefer the first track.

Third is their rendition of the classic "America The Beautiful", which launches into a slow piano-heavy intro that sets up Steve playing guitar to the vocal melody like on "The Star Spangled Banner", but the wait is less to get here. Again, he does this extremely well, but it has a different feel, as arguably, "America The Beautiful" is an easier and less dramatic song vocally, so his guitar work here is more reserved as a result. With that said, he plays this flawlessly, and the slow pacing suits the themes and messages of such a patriotic song, so it sort of feels like a mix of the first two songs. Very well done with great guitar work, but if you can't appreciate the pacing of the song and it's original message, you won't prefer it to some other tracks. Fourth is the album's shortest song, a rendition of the Civil War-era song "When Johnny Comes Marching Home", and it injects some energy from earlier tracks with some nicely varied melodies, some guitar solos that don't detract from the song, and more callbacks to the original version that will be familiar to the casual listener! Steve shines here, and Craig's keyboard work adds some solid atmosphere to the background, and the song shows some variance and more original touches than some of the earlier tracks, so it's definitely a standout on "The Dawn's Early Light" so far!

Fifth is the album's only completely original track, "The Tomb of the Unknown Soldier", which is inspired by the graves of unidentified soldiers. The only album track exceeding 5 minutes in length, it opens in dramatic ballad fashion with a solo keyboard/piano intro that's very well performed and emotionally tinged, before slowly implementing guitar work and drumming around the 2 minute mark. The pacing and intention of the song stays the same for the most part, but I like the orchestration midway through, and the guitar melody late does add some vibrance to the already powerful track. Though not a heavy song, it's not supposed to be, and it has a vibe of remembrance & loss, which gives this song a deserving importance & worth! That's followed by "Military Themes", a 3:35 medley of the themes of the U.S. Army, Navy, Marine Corps, Air Force, and Coast Guard. Flowing into each other without formal breaks, this is easily the heaviest track since the first song on "The Dawn's Early Light", and it seems like Craig and the Giles brothers are injecting more of their own talents into these military themes to make it their own, and to flow like they were always intended to be together! While they stick to the original melodies, they inject some heavy riffs and melodies on this track, and it is a very entertaining metal track on it's own merits!

Seventh on this album is "My Country, Tis Of Thee", which Canadian readers may recognize as the American version of "God Save The Queen". An orchestral influenced opening and guitar melody to the original vocals help lead this track off, Theatre of Night's rendition takes on almost a dirge quality with it's slow pacing and doomier sound, but I really like the added orchestral music, and the drum work by Greg Giles is pounding at parts. This is one of the darker songs so far on "The Dawn's Early Light", but it has an epic feel at varying points, and it's very well done for what it is! Eighth is "Dixieland", a rendition of the U.S. folk song "Dixie", and Theatre of Night effectively slow this song down into a heavier and more epic feeling version of the original, and like earlier songs, the guitar work really shines, along with some solid drumming and an effective use of effects! I know this song had some dated negative connections at one point, but I didn't get that vibe at all when listening, as they put great care and love into these songs, and "Dixieland" is no exception! Well performed, if not exceedingly heavy, but they know what mood to put on what song for it to achieve the right messages!

The album's final track is "Taps", which opens with rain and thunderstorm effects to help set the somber tone, especially given that "Taps" is often played at military funerals or at dusk. The keyboard effects to replicate the horn on more common versions of this song are effective, and though this song doesn't serve as a full band showcase compared to many earlier tracks, Craig does some stellar work here to make a heavier and grand variant of "Taps", and though I typically don't like albums ending on a down note, it makes perfect sense to end "The Dawn's Early Light" in this fashion, knowing how important this song is as a means of closure, so I have no complaints! So, how does Theatre of Night's second album stack up? Well, I'm glad to see that the attention, detail, and respect for the original material is as prevalent here as it was on "Christmas Night", maybe even more so, because the songs they covered here deserve to be given a faithful interpretation, and though some changes were made, the guys stayed faithful to their original styles and intentions, and as a result, it's respectful yet can be enjoyed by metalheads!

For the individual members, Steve Giles' guitar work was proficient and melodic throughout, especially when instrumentalizing vocal harmonies, and Greg Giles was given much more chances to shine on drums here (and that he did), especially given the frequent absence of his drum parts on their last album. Craig Harrison's keyboard and effects work was also great, and he threw some welcome orchestration in along with nice atmospheric and dramatic piano parts, and individually, the guys did great! I preferred "The Star Spangled Banner", "When Johnny Comes Marching Home", and "Military Themes" the most, but nothing is badly done, and it's good that it's all done well, as these songs show great respect to their country and military. There are minor issues, like a lack of overly heavy songs, some repetition, and maybe a need for vocals occasionally or more guitar solos, but the point of "The Dawn's Early Light" wasn't to make a blistering original metal album. It was to honour the U.S.A. and the people that sacrficed to allow for the freedoms of America, and as long as Theatre of Night put their own spin on the material without disrespecting it, I have nothing to complain about. Overall, this is a successful tribute, and an entertaining album of metallized versions of many American standards, and it's a complete success on that basis! Pick it up today at the above links! 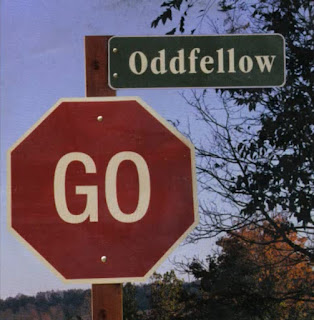 I hope you guys liked this month's CD review at the SMS! So, what's being reviewed next month? Though I've heard of no imminent metal CD reviews locally for August, I do have one CD in mind for a review in the event that nothing new is released, that being defunct Cedarville, Michigan hard rock quartet Oddfellow's only album "Go"! I say that for a couple of reasons: They're new to the site still, so it'd be cool to welcome them in further with a full review, and also, guitarist Jason Haske is active locally in the local cover rock band Chump Change, and if they play anywhere locally next month (which is likely), it'd be a perfect tie-in for the review! That said, a new review would take precedence if something comes out, and things could change that way or if Chump Change don't play locally next month, but that's the way I'm leaning right now. So unless something new comes out in the next few weeks, look for our review of Oddfellow's album (probably) between August 25th & 31st! That's all for tonight, but stay tuned for more news to wrap up July with tomorrow! Thanks everyone!
Posted by The Sault Metal Scene at 7:54 PM