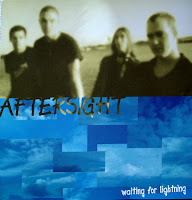 It's now time for our 44th monthly local metal/hard rock CD review at The Sault Metal Scene, and with no new heavier albums released this month (handwritten paper sleeve demos & free postings aside), we've dipped into the archives to take a long overdue look at defunct Sault Ontario hard rock quartet Aftersight's only album "Waiting For Lightning"! Recorded at Easter Island Studio in Sudbury in August 2003 and released later that year, this features Aftersight's classic lineup, including singer/guitarist Ed Vowels (now of Lucky 13), lead guitarist John Albury, bassist Jacob "Maybe" McEachern, and drummer Jeff Marshall. Though copies of "Waiting For Lightning" were distributed at concerts as recently as 2008, this album is long since out of print, but I did upload the whole thing onto the SMS' YouTube channel to stream for free, so do so at this location, and each song title is linked below to the YouTube copy! With 8 songs clocking in at around 32 minutes in total length, let's begin this review with the album's opening song "Wide Open Sky"!

"Wide Open Sky" opens slowly before kicking into gear as a mid-tempo hard rock number that shows the guys' talented pretty well! Ed's vocals here are a bit higher than they tend to be nowadays, but they have an interesting mix of punk and post-grunge sounds that give the material a bit of a kick! Jacob's bass work stands out well, especially in the pre-chorus sections, and Jeff's drumming is paced nicely with the rest of the music! I'd probably prefer this song to be a bit faster or heavier, or throw some variance into the structure, but "Wide Open Sky" is a solid album opener that has a timeless sound that would still be a good fit on hard & alternative rock radio! Next is the album's shortest track, "Days Go On", which has a bouncy and faster guitar riff to lead off, and it has more energy to it than "Wide Open Sky", taking on a poppier (yet more 1990s) feel. The lead vocals are slightly more aggressive, and even if the music isn't quiet as serious as on the opening track, it's more proficiently played. Jeff Marshall also supplied backing vocals late, but their grittiness and low volume seemed out of place given the tone. This is a good song, but I liked the tone and edge of "Wide Open Sky" a bit more.

Third is "Falling From Nothing", which starts with a lone guitar intro and some low STP-esque clean singing before slowly introducing other instruments. The drumming stands out a lot, and I like the build into the heavier choruses, but couldn't Ed have amped the energy into higher and heavier singing like in the opening songs when they got there? Jacob had said on the YouTube comments that they couldn't capture the "haunted" quality of this song's demo track in studio, and I do agree with that assessment for the most part. It never feels haunted, just lower and more intimate (aside from the harder rocking ending), but the music's well played, if not overly varied! Good song, but I bet it felt more natural live. Next is the CD's title track (and the longest overall) "Waiting For Lightning", which again starts softly like the prior song, but it suddenly jumps into an aggressive verse section that adds some nice diversity and energy that the last song lacked! If anything, the title is sung verbatim a bit too much, and there could be some better transitions between the softer and heavier stretches, but the guys show their talents throughout! Ed's vocal range is on full display, Jacob's bass lines are clear, and the guitar work succeeds despite the lack of a real guitar solo. Solid stuff overall, and a nice swing upward!

The next song is "Rd. Trip Breath",  which has a quality bass intro from Jacob McEachern (if a bit long), and some nice singing, before launching into an awesome heavy stretch with nice guitar effects and well suited vocals! Good pacing and it's the best mix of heaviness and catchiness so far on this album! The structure's a bit unique, with no real consistent verse/chorus definition, and John's lead guitar work is great to go along with it all! Aside from the bass solo going a bit long, this is by far my favourite song on "Waiting For Lightning" so far, and it mixes their heavier and softer sounds to great results! Song #6 is "Life To Call My Own", which has a lighter rock feel which reminds me of "How Your Remind Me" by Nickelback a lot, and while it's well played, it never seems to get legs compared to most of the earlier songs. Ed's vocals seem more tired than on many earlier tracks, the instrumentation rarely picks up (guitar solo aside), and it just seems too safe and by the numbers. It's good, just not overly memorable in comparison to songs like "Road Trip Breath"

The penultimate song on "Waiting For Lightning" is "W/O a Trace" (W/O's short for "without"), which has perhaps the heaviest start of any song on the album, and I like the groove of the guitar riffs especially! I just wish the vocals were more energetic, as they seem too reserved and low given the harder spark this song has. Couldn't at least the choruses have had vocals like on "Wide Open Sky"? The music though is among the best on the album so far, with possibly John Albury's best guitar solo yet, and really solid drumming, but the lack of vocal energy hurts the overall quality. Despite that inconsistency, it's one of the CD's best songs! This album closes with "Lost But Not Forgotten", which opens with a short bass intro before launching into a heavy modern rock sound with some thankfully more energetic singing and a catchy overall sound! A good choice to end the album (and their old concerts), I like how Ed's singing builds near the end of the choruses, and the overal structure is well composed, but it could stand to be a bit riskier. Very nice ending to the album though, and it showcases the whole band's respective musical skills to a good degree!

So what do I think of Aftersight's only CD overall? I'd say it's a very good album full of catchy and well performed modern and alternative rock songs, and while it has inconsistencies, it's aged very well and would still be a good fit on a station like Rock 101! Individually, I liked the different vocal ranges that Ed Vowels employed, and his and John Albury's guitar skills suited the material throughout, with some very cool riffs and grooves, as well as some quality guitar solos! Jacob McEachern and Jeff Marshall also held up equally on bass and drums, and for their young ages at the time, they were clearly talented! While there were a lot of really good songs on "Waiting For Lightning", like "Rd. Trip Breath" and "Lost But Not Forgotten", it wasn't a perfect release, and there were a lot of inconsistencies. I found that Ed's vocals didn't always flow with the songs' general tones or heaviness levels, and some tracks did feel very familiar without a lot of risks being taken.

None of them were really that long (neither were some guitar solos), and most tracks followed a general structure without a lot of variance or unique twinges, and like with "Falling From Nothing", a darker haunting feel could have helped with certain songs. Still, this is a well produced and entertaining modern hard rock album that has nicely aged in the past decade, and hopefully Aftersight will reunite down the road to bring these songs back to the live stage! Check out the full album at the above links!

I hope you guys liked this month's CD review, but what album will get a look next at the SMS? I'm not sure, but I have plans in place. Of course, preference will go to a new local album release (as in, one with a paid & formally packaged release, no loose paper-sleeved demos or free postings), and you can get previews of what could be next in our next Where Are The New Albums? feature post on Saturday! I've heard rumours for many, but time will tell if something does come out by the end of March. The exceptions to that would be albums by Haggith or Mike Haggith, as it's too soon from our last reviews of either, but I'm looking at a likely review of "Deuce" or "Apocalypse" in April. If no other new albums are released, I'll do an archive review, and if I can't tie in a review of any available metal/hard rock albums with a March concert, we'll likely review Woods of Ypres' 2008 compilation album "Independent Nature: 2002-2007", as we'll be past our 6 month buffer from the "Woods III" review, and it will be a nice lead-in to the Juno Awards in April. Regardless of what review is next, keep an eye out for it by the end of March!

That's all for today, but stay tuned for weekend concert previews tomorrow as we wrap up the month of February! Thanks everyone!
Posted by The Sault Metal Scene at 8:26 PM