With this year's Juno Awards coming this weekend, and given this band's nomination for Best Metal/Hard Music Album, here's this month's CD review at The Sault Metal Scene, and it's of defunct local black/doom metal band Woods of Ypres' 2009 compilation album "Independent Nature 2002-2007"! The band's only "best-of" collection, "Independent Nature" was released in April 2009 through the band's original independent label Krankenhaus Records. It was their first album release following the band's (and late frontman David Gold's) relocation to Sault Ste. Marie the previous year, their last non-single release through Krankenhaus, and their last CD with a primary black metal influence. The compilation features 4 songs each from Woods of Ypres' first three CDs ("Against the Seasons: Cold Winter Songs from the Dead Summer Heat", "Pursuit of the Sun & Allure of the Earth", and "Woods III: The Deepest Roots & Darkest Blues"), all of which were recorded independently between 2002 & 2007, hence the album's title. Though physically out of print, "Independent Nature 2002-2007" can be purchased on iTunes for $9.99 (or 99¢ a song), while these songs are obviously all available as part of Woods of Ypres' first three albums.

Given that we've reviewed these songs & Woods of Ypres' first three studio albums on here already, I won't re-review them in depth, but I'll link to each song and our prior reviews as we sum up each third of "Independent Nature", so you can hear the songs or read my in-depth thoughts if you want. The first 8 songs on this compilation were recorded in 2002 & 2004 at Spectre Sound Studios in Tecumseh, Ontario, while the last 4 songs were recorded from 2006-2007 at Obsidian Sound & Chemical Sound Studios in Toronto. Only David Gold features on each track, recording drums on all 12, vocals & guitars on the last 8, and bass on the "Woods II" songs, while keyboardist Jessica Rose plays on the final 8. The rest only perform on one album's material, including founding members Brian McManus & Aaron Palmer on the first 4 songs, uncredited performers Connor Sharpe & Steve Jones on the middle 4, and bassist/backing vocalist Dan Hulse on the last 4. Now, let's begin with the songs from Woods of Ypres' first album!

The first four songs on "Independent Nature" consist of an almost-complete reissue of Woods of Ypres' 2002 debut EP "Against the Seasons: Cold Winter Songs from the Dead Summer Heat" (a.k.a. "Woods I"), including the songs "Intro: The Shams of Optimism", "Crossing the 45th Parallel", "The Sea of Immeasurable Loss", and "A Meeting Place & Time", with only "Awaiting The Inevitable" not featured. Black metal purists often point to this as their favourite Woods of Ypres album, but while I do enjoy it, Woods of Ypres evolved and grew a ton in the 9 years that followed, and it has the least in common with their other 4 CDs. The natural and personal feelings of the EP came through really well, and though David wasn't singing yet, Brian McManus & Aaron Palmer handled harsh and clean vocals respectively well, and David's drumming was great! That said, Aaron's bass is sometimes buried, and there are repetitious stretches, especially on "Crossing The 45th Parallel". None of the 5 songs are bad, and they capture early Woods of Ypres well, but I'd personally have swapped "The Sea of Immesaurable Loss" for "Awaiting The Inevitable" on the compilation. 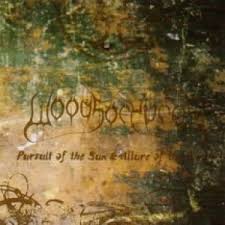 The 5th-8th songs on this CD come from Woods of Ypres' 2004 CD (and first full length album) "Pursuit of the Sun & Allure of the Earth" (a.k.a. "Woods II"), including the songs "The Will To Give", "The Sun Was In My Eyes (Part Doom)", "Allure of the Earth", and "Dragged Across A Forest Floor". I still find that the band sounded more mature, diverse, and better produced on this album (their first with David Gold fronting Woods) than they had on "Against The Seasons", with glimpses of future melodic material and a lot of intricate and heavy elements that added up to an improved sound, but there can be instrument muddling, the lack of guitar solos is still present, and I'd have liked to have heard more keyboard input from Jessica Rose than there is. As for the individual songs, I'd have liked to have seen the empty-sounding "Allure of the Earth" replaced on "Independent Nature" by the first "Sun Was In My Eyes" track (for completeness) or "Shedding The Deadwood" (a better ballad, I find), but these are a definite improvement overall from the "Against The Seasons" material, and fans of early Woods of Ypres should enjoy these four songs! 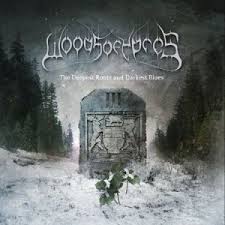 The last four songs on "Independent Nature" come from the band's last black metal album, 2008's "Woods III: The Deepest Roots & Darkest Blues", with the four selected songs being "The Northern Cold", "Your Ontario Town Is A Burial Ground", "Distractions of Living Alone", and "Thrill of the Struggle", which were (I think) the only songs from "Woods III" to be played at in future Woods of Ypres shows. As I stated when I reviewed the full CD, this is my favourite Woods of Ypres release, and it seems to bridge the gap between the best of their 2000s-era black metal work and their early 2010s doom metal sounds. The four songs on the compilation are all quality heavier choices from "W3", and David's lead vocals & guitar work really broke through here,  but there is some buried elements, and the lack of guitar solos is really noticeable. Songs like "Iron Grudge" or "Through Chaos & Solitude I Came..." would have been welcome selections for the compilation too, but with such a good album, some had to be left out. Ultimately, this transitory album was Woods of Ypres' peak to me, and it caps off a nice quality build on this best-of album!

Overall, "Independent Nature 2002-2007" probably won't be viewed with the same frequency as Woods of Ypres' very different 5 studio releases, but I find that as a compilation, it will continue to serve as a valuable first look into Woods of Ypres early-mid 2000s run as one of Southern Ontario's most promising black metal bands, long before the move north and the shift to doom metal influences. Though I'd have replaced a couple of tracks, there's a quality cross-section of songs from each of Woods of Ypres' first three CDs, and the evolution and maturity of their sound over the first half of their run really comes through as you hit the middle and latter sections of the disc. I almost wonder how it would have turned out if a late 2000s lineup of Woods of Ypres had re-recorded these tracks in a doom metal style (a'la 2008-2011 concerts), but for novices of Woods of Ypres or their black metal work, this is a great way to dip your toe in the water before buying full albums of theirs! Of course, this isn't the album that got Woods of Ypres' it's Juno nomination, but you can see the transition to the sounds and styles that got "Woods V: Grey Skies & Electric Light" to the awards this weekend, and hopefully David & company's hard work & dedication will pay off with a posthumous award on Saturday!

I hope you guys liked this month's CD review, but what's coming up in May? Hopefully a new album review, and though nothing concrete has been announced for a release between now and next month, there are many possibilities that you can read about in our most recent "Where Are The New Albums?" post! The exception to that would be Mike Haggith's newly released solo album "The Present Din", as we're not past our 6 month buffer from our last review of his, but I have that tentatively pencilled in for June. In terms of archive reviews, we will not be looking at a SweetKenny album or one of Woods of Ypres' vinyl singles, as it's too soon from our last reviews of either, but both are possibilities in the fall. Archive review options for next month include albums from Candle Hour, Detroit, Facedown, Foothill Road, and Sykotyk Rampage, plus hypothetical albums that I may get access to/copies of by then, such as As It Stands' first EPs, Infrastrate's CD, and any old cassette albums (like Amethyst's debut or David Gold's old band Proposition 86), but those are all dependent on me getting access to copies. No matter what's coming next, stay tuned for our next local metal/hard rock CD review in late May, and stay tuned for more news this week! Thanks everyone!
Posted by The Sault Metal Scene at 12:00 AM