Bring The Fallen - "Stand Before" Review!! 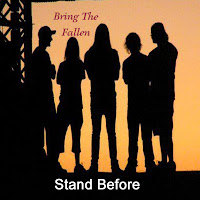 It's now time for our 51st monthly CD review at The Sault Metal Scene, and today, it's of defunct local death metal quintet Bring The Fallen's only EP "Stand Before"! This EP was recorded at Green Room Productions in mid-2009 with producer Brad Griffith using time won at their YMCA Battle of the Bands victory that March as The Undead Warriors, but financial difficulties shelved it's release for four years. Bring The Fallen finally released "Stand Before" independently at Oddzfest 2013 Metal Mash-Up on July 26th in honour of their one-off reunion that night, so now we can review it formally on here! The EP features Bring The Fallen's classic & final lineup, including former Bear Hunters guitarist Josh Stephney on vocals, AtrophiA alumni Andrew Chiarello & Dan Souliere on guitar, Josh's ex-Giwakwa bandmate Nolan Rainville on bass, and Fountain of Betrayal alum Travis St. Amour on drums. "Stand Before" was sold by donation at Oddzfest, but I don't know if extant unsold copies are in stock, so contact band members on Facebook just in case.

I've also uploaded the whole EP to our YouTube channel (as it's likely out of print regardless), so each song name below is linked to their YouTube copy! With five songs clocking in at over 19 minutes in length, let's begin our review with the first song and the EP's title track "Stand Before"! After a brief drum intro, the full band kicks into gear with a heavy opening section with great guitar work, and I like how the production helps clarify Josh's vocals a lot so you can hear individual words easier! The guitar work from Dan & Andrew is solid and unrelenting, with Andrew's extended guitar solo showing his skills well also! Stucture-wise, few risks are taken on this song, but everyone's on form musically, and the pacing and chemistry is very visible! If anything, I'd like to hear some variance in the chorus vocals (perhaps with Josh & Dan trading off like they did live), and the song ends somewhat abruptly, but this familiar live favourite translates well in studio, and Bring The Fallen deliver well in this early recording!

That's followed by "Night Riders", which fittlingly includes galloping guitar riffs that go well with a song of this name! A bit slower than it's predecessor, Josh's vocals come in really loud, but we get a nice showcase of Travis & Nolan's drum & bass talents early on, and Andrew gets a pair of guitar solos that impress well, especially the longer & more intricate first one! While this song definitely has more structural variance, and the guys show more of their collective talents, "Stand Before" was catchier and a bit heavier, so it's hard for me to pick a favourite. This is a quality song though, and well worth giving a listen! Third on the EP is "Kill Your Life", a song that I don't believe survived into concerts in the early 2010s. The track itself is a lower pitched and more straightforward death metal original that's vocal heavy with assaulting instrumental backing that only relents for a guitar solo. Really solid showcase of Nolan's bass work & Josh's vocals to me, but compared to it's predecessors, it's not as complex or varied. Still, it's definitely a moshable and brutal track, and I wonder why it didn't get a lot of live attention after 2009?

The disc's penultimate (and longest) track is next, that being "Exposed Embankment",and after a buzzsaw of a guitar-heavy intro, Bring The Fallen hit the ground running with very brutal verses, and this song definitely doesn't flow with the usual "verse-chorus-verse" pattern, which I appreciate for diversity! Creatively, the guys shown their skills here well, with nothing being predictable, and Travis' drumming really catches my attention, but the lack of a guitar solo is disappointing given this song's format. Still, this song's a winner for all of the skill levels shown, especially the middle-late stretches of it! "Stand Before" closes with it's shortest track "Defiling Despondence", which opens strongly with a solid guitar riff and great drumming, and it generally returns to the territory of the title track as a brutal and catchy original that doesn't overstay it's welcome. Josh's growling is probably at it's best, the guitar solo from Andrew is as good as you'd expect, and everyone lays into this live favourite with enthusiasm and energy, helping cap the EP off on a high note!

So, what's the final word on Bring The Fallen's long overdue EP? I'd say it's a very solid and heavy glimpse of their early run, and it shows exactly why they won three battles of the bands in their heyday! Talent-wise, B.T.F. were a great fit, with Josh Stephney's clear growling, Dan Souliere's riffing, Nolan Rainville's skilled bass work, and Travis St. Amour's fast and varied drumming fitting this puzzle nicely, but Andrew Chiarello's awesome guitar solos and lead work helps put the material just that extra step higher, and I wish he'd get back into live music! Brad Griffith's production was pretty good too, I wonder why we don't hear as much from him in terms of producing? That said, I think "Stand Before" would have turned out better had Bring The Fallen recorded it in late 2009 or early 2010, as they arguably peaked as a band and had their sound fleshed out by then ("Nostalgia" would have been nice to hear, for example), so why not use the later recording time they won at their other battles to add to the 2009 sessions?

For what we did get though, we get a very heavy slice of death metal originals that started and ended very strongly, and while the release took place in very different circumstances than we could have imagined in 2009, it's release at their farewell gig in July helped give closure to their run, and fans were rightfully pleased! Hopefully the members of Bring The Fallen stay active in music going forward, and check out the full EP at the above links!

So, what album are we reviewing on the site next month? After five straight months of new releases, I admit not being sure as of today. We have no new local metal/hard rock albums with a verified release date coming out until SweetKenny's "Cracks In The Wall" on Halloween, and I'm not gonna rush that for next month as I'm still unsure whether to review that or "Perception" next of his. A new Mike Haggith album is possible too (either "The Present Din or "Where It Ends"), but that's pending the release of the latter, and the Haggith band's "Apocalypse" is on hold until at least the winter, as it's too soon from our review of "Deuce". Sykotyk Rampage is also an idea, but they haven't released any of their albums for sale since 2011. If none of them releases an album for sale by late October, we'll review an archive album, and I'm eyeing Facedown's 1997 demo cassette "Self Murder", as they shared at least one member with Destroilet, so we can tie it in with shows they're playing next month, but that's assuming no new heavier albums come out. Regardless, stay tuned for updates as they come in, and for more news (including our Dayglo Abortions concert preview) tomorrow! Thanks everyone!
Posted by The Sault Metal Scene at 12:29 PM