Woods Of Ypres - "Allure Of The Earth" Single Review!! 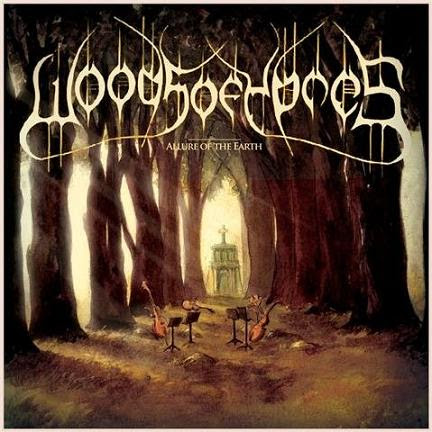 Let's end the month strong with our 57th monthly CD review at the SMS, though for the first time in 11 months, we'll be looking at an archive release due to a slow schedule for new local metal/hard rock albums this month (not counting ones within our 6 month buffer period.) This month, we'll be reviewing a single for the first time, that being the "Allure of the Earth" vinyl released by defunct local blackened doom metal band Woods of Ypres! The last release on frontman David Gold's original independent label Krankenhaus Records, this single saw it's limited release on September 6th, 2009 exclusively on 500 7'' vinyl records, each hand-numbered with lyrics sheets and download cards towards digital copies of this single and Woods of Ypres' 2009 compilation album "Independent Nature 2002-2007". The song "Allure of the Earth" was recorded at Spectre Sound Studios in Tecumseh, Ontario in 2004 and originally released on the "Pursuit of the Sun & Allure of the Earth" album (or "Woods II") that August.

Woods of Ypres were represented for these sessions by the late David Gold on all instruments save for Jessica Rose on keyboard, while ex-members Steve Jones & Connor Sharpe went uncredited for their guitar & bass parts due to leaving the band beforehand. As well, the second song on the single is a band-endorsed cello cover of "Allure of the Earth" by Australian cellists Sebastian Simpson & Chris Doig, which we'll cover in a second. Even with David's passing in 2011, this single was only available in one limited pressing (and isn't digitally available for sale), so sale copies can be expensive, but you can buy the original song and it's album on iTunes at this link, and both songs are readily available online in streaming copies.

We already reviewed "Allure of the Earth" as part of our full review of it's album in September 2011, so I won't rehash that here, but check this link to read it in full. Essentially Woods of Ypres' first toe in the water of softer ballad material, the song seemed to be based around the desire for death, which may strike familiar with fans compared to the themes of last year's "Woods V". As an early example of David's range and diversity as a singer, it does the job well with solid passion and emotion, but the first half still feels empty, almost like it needs extra instrumentation. Black metal purists will still prefer other songs on "Woods II", but "Allure of the Earth" helped plot the future course for Woods of Ypres' studio material, and it's dark emotion still holds up! The B-side cover of "Allure of the Earth" by Sebastian Simpson & Chris Doig is well performed and adds it's own haunting quality to the song, though with just cellos, it could be considered empty as well. Also, the arrangement is altered in some spots, making the total runtime of the cover a few seconds shorter.

Overall, the "Allure of the Earth" single was a nice release for diehard Woods of Ypres fans in 2009, and the inclusion of the cello cover and vinyl formats gave some solid incentives to pick it up, but given the length and limited availability, I'd only recommend seeking out & buying a copy to collectors. With only 500 copies printed, the price and availability of this record will only go up when copies turn up on the secondary market, and with just two songs, casual fans would be better off buying or downloading "Pursuit of the Sun..." to get their fix of this song & this era of Woods of Ypres, especially as there's no exclusive band originals on it, but this is definitely a recommended album for collectors to look for! I hope you guys liked this month's local metal album review, but what's coming next month? Given recent indications of imminent releases, our next CD review could very well be the debut EPs from Shit Liver or Jack Spades, which are both pencilled in for April releases, but Telephone & Address' "Rotten EP" could be this month as well, pending acquisition of a copy.

For reference, our next Woods of Ypres review (of their 2011 vinyl single "Home") will be our last of their CD reviews on here, barring any possible posthumous albums, but due to our 6 month buffer period to avoid repetition, that won't make it to the site until September at the earliest. Also, a SweetKenny review (of either "Ink!" or "This End Up") is likely for mid-2014, as it's too soon from our last review of his also. With that said, look out for our next CD review in the next 4 weeks, and stay tuned for more news and notes soon! Thanks everyone!
Posted by The Sault Metal Scene at 12:35 AM