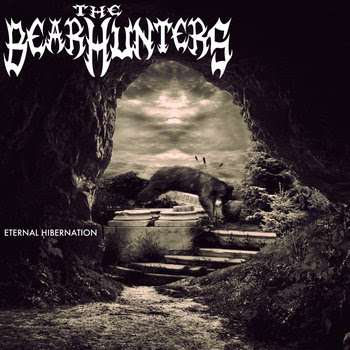 Let's help end 2014 in style with our last CD review of the year, and 66th monthly review total on the SMS, as we're finally taking a look at local death metal quintet The Bear Hunters' debut full length album "Eternal Hibernation"! Released at a well received CD launch concert at The Canadian Nightclub on November 29th, this CD is the band's second overall (after this fall's "Collapse The Sun" single), and it compiles the band's first 10 public original songs. Released independently (and mixed and mastered) through lead guitarist Mitch Sirie's independent label Edge of Eden Productions, "Eternal Hibernation" was recorded locally last year & this year with producer James White at White Wreckords. Dedicated to the memory of late original rhythm guitarist Andres Duchesne (who cowrote two of the album's songs), The Bear Hunters' current lineup is represented on the disc, including singer Nik Deubel, Mitch on lead guitar, Josh Stephney on rhythm guitar, Justin Lam on bass, and Johnny Belanger on drums.

Copies of "Eternal Hibernation" can be bought locally at The Rad Zone, through band members, and at the band's concerts for $10, while digital copies can be purchased on Bandcamp for $7, and song titles below are linked to their streaming Bandcamp copies. Featuring 10 songs clocking in at around 41 minutes in length, let's begin our review with a look at the first song! "Eternal Hibernation" opens with "Dominate", which is also the CD's shortest track. Lyrically about overcoming and dominating complacent and directionless people, the song opens with a familiar opening isolated guitar riff before the whole band kicks into gear, with Nik's clearly enunciated growling vocals easy to hear, unlike at some of their live concerts! Though it lacks some of the technicality of the band's newer originals, it has a consistent groove with nice complimentary guitar work from Mitch & Josh, and strong bass from Justin! Nice hard driving song to kick off the CD, though the quality jumps on solo guitar sections are a bit jarring.

Second is "Casualties of War", which speaks of how war and combat affects soldiers in non-physical ways too, so they're also casualties of war. Faster, heavier, and longer than it's predecessor, this song has more of a groove metal influence in it's guitar work, though the mix isn't as clean for individual instrument clarity. Johnny's drumming is really solid and relentless here, and Mitch's guitar solos hold up well and doesn't take away from the intensity! The nearly non-stop attack and added melodies make this an early highlight on the CD for sure! That's followed by "Condemned", with lyrics from the point of view of someone who kidnaps and slowly kills a deceitful man. Another nice marriage of death and groove metal with a catchy melodic guitar riff throughout the verses and nice bass work, Nik's vocals are on point and consistent, but I actually prefer the clean chorus vocals that he used live for this song in the early days than the lower growls here. The song might benefit from being a bit faster, and the verses can get a little monotonous, but the guys sound nice & brutal again!

Song #4 is "Deception", which seems to speak of a personal journey into hate, anger, and opposition of societal norms. Opening suddenly with a mid-paced (and scratchy sounding) instrumental section, this song is well performed instrumentally with solid crashing drums and relentless vocals, but the song has always seemed to be missing a melodic stretch or change in tempo, and to me, mostly glides along without risking anything major. Well performed with nice cohesive guitar chemistry, but it's lacking an extra "something". Then we have "Succumb To Eternity", which is notable as the CD's only album without Nik having a credit for the lyric composition. Bassist Justin Lam handled all lyrics here in this song about wishing death and vengeance upon an enemy, similar in tone to a "Condemned" prequel. Opening with a galloping drum section by Johnny, this song can be repetitive, but it has a strong aggressive melody, nice mix, and memorable mid-chorus guitar licks from Mitch that come through nice and loud! I like the aggression and drumming here, and though it's not as ambitious as some other tracks, it's one of my personal favourites!

Sixth up is "Bloodthirst", which is another song about wishing death and bloodshed on an enemy, which increasingly seems to be a recurring theme. Opening with a slow guitar section that slowly builds in substance for the first minute, the song begins in earnest after that with familiar but intense verses and some of Mitch's best guitar solos on the CD (especially coming out of nowhere between verses), helping add up to one of the album's darker & more dramatic songs in tone! The song does seem to get a bit stagnant late, but everyone's on their game here, and fans of their heaviest material will be right at home! Next is "Overthrown", which has a similar lyric trajectory, though this time about overthrowing and enslaving people. Relentlessly beginning with heavy riffs and nicely varied harsh vocals, this song largely doesn't stray from the norm early, but it has a nice groove, well paced drums, and a bit of a punk bite at times too. A reserved bridge and more melodic last minute help deviate things well with a softer ending, helping another strong track!

Eighth on "Eternal Hibernation" is "Karma", which is about causality and how one's bad actions lead to bad karma, in violent fashion like on prior songs. Another aggressive song that chugs along with The Bear Hunters' usual ferocity, the song has more of a swing vibe in it's lyric cadence, and it's among the more aggressive and dark songs on the CD, though Mitch's guitar solo really shines late! The song on the whole does feel too long though, and was losing steam before the solo with it's pacing and repetition. Well composed and suitably brutal, but laggy mid-way through. Second last, we have the album's first single "Collapse The Sun", which isn't an anti-summer song, rather about bringing darkness & despair on society. This is one of the shortest songs on the album, but also one of the catchiest via it's structure, guitar melody, and chorus that's easy to sing... I mean, growl along with! Mitch & Josh seem to be having a lot of fun on the riffs and solo here, Justin's bass work is solid, and while it lacks later technicality, this song was a great choice for the first single

Just like at most shows, "Eternal Hibernation" ends 'er with Render (as in, "Render This Void"), which is also the album's longest song. Lyrically about one's path to Hell and oblivion, this song opens strong with solid guitar work, an aggressive and straightforward structure, and brutal vocals, and though it's not too fast, it gets the job done for death metal fans! The bridge ramps things into a doomy level that doesn't relent for the rest of the song (save for the guitar solo), but the closing riff and instrumental portion (which gradually slows down until the song's end) goes on far too long for my taste, and the song would have ended stronger to me if you trimmed a minute or so off the end, leaving the CD's closer to drag too long for me. With all of that said, what are my final thoughts on "Eternal Hibernation"?

Overall, I enjoyed The Bear Hunters' debut CD, and found it to be a well realized culmination of a long journey to get their first originals out! All of the guys performed well individually, with Nik's crushing vocals, Mitch & Josh's tandem guitar riffs, Justin Lam's excellent bass lines, and Johnny's consistent drumming all coming together very well! To me, this album hit it's best heights when the guys used their melodic and groove metal sides like on "Collapse The Sun", "Succumb To Eternity",  and "Casualties of War", which gave an extra kick to their death metal intensity! The production and mix is generally good for a completely independent production, but sometimes, instruments were buried or scratchy, and there was some inconsistency in that department. On the negative side, I would have liked to have seen some of the old clean vocals, more guitar solos than we got, some more lyrical variance, and a reduced ending to "Render This Void", but for a first effort, you can't complain too much.

Some may also wonder why songs like "I Fear No God" and "Transcend Judgment" are absent, but the guys have already established that those are to be on their planned second full length CD, "The Dead Testament". All of that said though, "Eternal Hibernation" is a strong and brutal first effort for The Bear Hunters, and they can only grow from here as they approach their next album plans! Pick up this album A.S.A.P.! I hope you guys liked this month's CD review, but what's coming to the site to kick off 2015 for our reviews? I'm not 100% sure yet, but a new CD from Dafter, Michigan solo project SweetKenny is very possible, as Ken's new solo CD "Slobber" is tentatively scheduled to come out next month. If it comes out as scheduled, that or his newest CD at present "Amazonian" could very well be next, but that all depends on the "Slobber" release, and who knows what else is on the imminent horizon. In any event, stay tuned for updates on our next album review as we hear it, and for our 2014 retrospective post TOMORROW! Thanks everyone!
Posted by The Sault Metal Scene at 2:12 AM