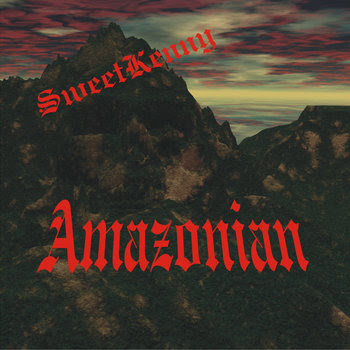 Let's close January 2015 with our first monthly CD review of the year, and 67th total at The Sault Metal Scene! This month, we're looking at Dafter, Michigan solo hard rock musician Kenneth "SweetKenny" Sutton's 10th solo album "Amazonian", which we chose over his brand new release "Slobber" for our next review of his due to it being slightly heavier. Released on October 31st of last year, "Amazonian" was the third solo album that SweetKenny released in 2014, and like his past releases, it was recorded at Waterfall Records in Dafter over the preceding months. "Amazonian" is self-described as a "heavy rock, vocal, instrumental, high energy, fun album", and like most of his past and later releases, it features Ken on vocals & all instruments. You can buy "Amazonian" for $9.99 on iTunes and/or CDBaby, or for $12 on Bandcamp, and while the full album can be streamed for free via his website, please support his work by buying this album!

Featuring 11 songs (including six instrumentals) clocking in at over 63 minutes in length, with each song linked to it's Bandcamp copy, let's begin our fourth review of a SweetKenny album with the first song, "Look At Life"! Starting with a high energy opening with all instruments in play, this song has a bluesy undercurrent while maintaining a heavy and busy sound from almost start to finish. The first instrumental song on "Amazonian", this song's composition strikes me as overstuffed, but it's well performed, Ken does bust out a solid guitar solo, and it does hold your attention well! Second is "It Just Is", which is a slower paced and more deliberate number. The first song on the album with vocals, Ken breaks out grittier and deeper vocals here, but they mostly lack his usual Elvis-esque melody, and sound too much like he's holding something back. I like the cleaner structure, but the song doesn't have the enthusiasm of "Look At Life", and it is more by-the-numbers.

The lengthy instrumental "Mustang" is third on the album, and it immediately kicks off with a catchy chugging guitar riff and strong bass while shifting to a blues rock sound. Never getting to a speedy pace, "Mustang" has a catchier rhythm and stronger compositon than the first instrumental, and though it never feels repetitive, it does feel a bit too long, and probably could have been tightened up if shortened. Though not as enthusiastic, it's a stronger overall song to showcase Ken's instrumental talents, especially on freestyle guitar! Fourth is "Arm of God", which Ken says is "about things to come." The religious themes don't take away from the song's tone, being the heaviest so far on "Amazonian", including gruff and emotion-filled vocals and strong riffing. At the same time, the heavy composition lacks melody during any stretch with vocals, but given the themes, it is obviously a more serious song. Still, it's an improvement on "It Just Is"!

Fifth is "Bullet", a solid instrumental that is the best showcase yet for his freestyle guitar work, which goes along well with a better paced song structure that doesn't get muddled or repetitive! His guitar soloing, though a little simplistic compared to earlier songs, flows nicely with the overall song, My only real gripe is that "Bullet" (an odd title given the pacing) doesn't have a real ending, instead fading out slowly for the last minute, but it's definitely the best instrumental so far on "Amazonian"! "Crud" is next, and though it runs for 4:30, it is surprisingly the album's shortest song. Keeping with the steady song improvement by the album's middle, this is the best song with vocals yet on the CD, marrying his hard rock freestyle sound with melodic vocals, to good effect, though Ken's singing is oddly low in the mix. Quality guitar solos can also be found in this catchy number, which has the bluesy aggressiveness that SweetKenny specializes in, and it's definitely a highlight track!

Next up is the title track "Amazonian", which opens with jungle and animal sound effects to fit the title, but it's otherwise an instrumental. Keeping with the album's upward trend, this tops "Bullet" for vocal-less tracks on the album, harbouring even more of the melodic blues/hard rock that SweetKenny has done so well, while maintaining a fast pace and a fun spirit! The guitar soloing isn't a focal point, and the song doesn't have a jungle vibe outside of the opening effects, but this has the best complete band sound yet on this album, including a fun drum beat at the end, and it's a must listen!

Song #8 is "It's Up To You", which Ken said is "about you taking steps in faith." The spiritual themes are effective, but the song itself is a regression from the gradually rising entertainment level of the preceding songs, instead pacing itself at a level more appropriate to the lyrical content. Though still a rock song with a good composition, "It's Up To You" has more of a deliberate "talk to the listener" theme that works for the message, but is musically a drop off from the preceding tracks. Then we have the relatively short "Time in a Box", which is also not quite at the level of the title track, but it has it's moments! The lead guitar has an odd dreamlike tone to it on this instrumental, and it does seem to be a bit jumbled between energized and darker tones, especially late. The slow fade out at the end is again too drawn out, but this is a good instrumental that explores some different sounds!

The last song with vocals is "Show Me Why", which ends the sung half of "Amazonian" on a strong note with a more upbeat though impassioned song that makes good use of Ken' vocal range, though it does have moments of repetition. The guitar work is effective and melodic, though not overly heavy, and the ending spoken word plea about freedom adds a little extra punch! The album closes with it's longest song, the free flowing instrumental "Can It Be (Guitar Confusion)". Opening with sounds of a helicopter taking off, this is a consistently good song that makes use of Ken's freestyle guitar work, though it's not groundbreaking from what we've already heard on "Amazonian". Like on "Mustang", this song could stand to be shortened despite little repetition, but it makes use of Ken's multi-instrumental talents nicely, and is a solid capper for SweetKenny fans new and old!

So, what are my final thoughts on SweetKenny's 10th solo album? Overall, "Amazonian" continues the consistency in tone and style for existing fans of his material, but it can be uneven at times Compared to our last reviewed album of his (last spring's "Ink!"), "Amazonian" does have more of a focus on instrumental songs, is much longer, and harbours more serious themes and messages. That's not to say that it isn't a strong release, especially with the middle tracks, which seem to slowly improve and get more entertaining and varied, but they are bookended with more serious and reserved material, often with long fade-outs at the end. Ken's talents as a musician are clear throughout though, but I'd have liked to have seen more of the freewheeling Sykotyk Rampage-esque enthusiasm on more tracks. "Crud" and the title song are clear highlights, but fans of SweetKenny's will be right at home throughout, especially in the middle! Buy "Amazonian" and more of his prolific discography above!

I hope you guys liked this month's CD review, but what's coming up next month? I honestly have no idea as of this writing, but you can get previews of albums that may be on the horizon in our next "Where Are The New Albums?" post on Monday, as any album included in that monthly feature (and more) could be next! The exceptions would be anything from a band who we reviewed in the preceding six months, as I don't want to be perceived as showing a bias for or against anyone, so if Telephone & Address or The Bear Hunters release anything next month, they would be held until at least March or June respectively. On the same token, a new SweetKenny review won't make it to the site until at least July due to the 6 month buffer period, but a review of "Slobber" or a possible summer 2015 release is likely for then! And yes, Blood Shed fans, I am aware of the 11-way split release plans, I'll keep an eye on that. Stay tuned over the next month for more on our next CD review, and for much more next month! Thanks everyone!
Posted by The Sault Metal Scene at 3:19 PM