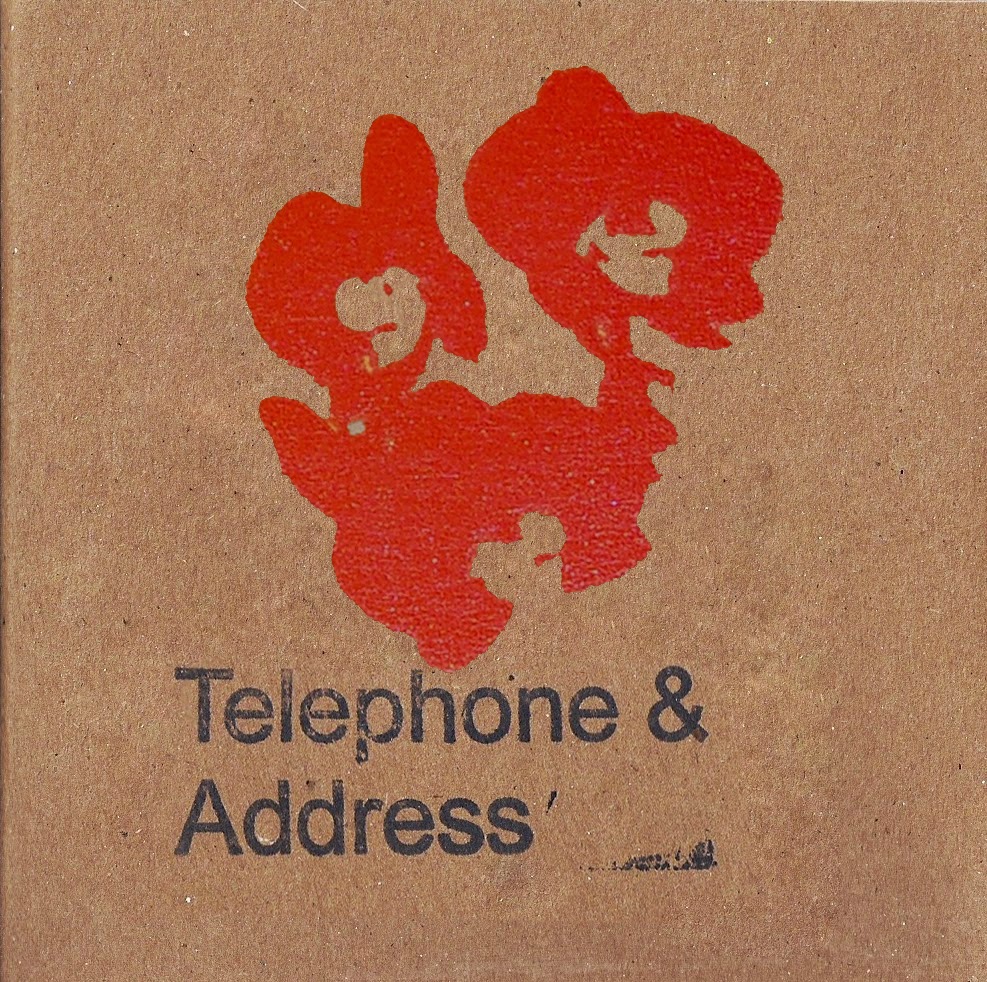 After looking at Treble Charger's debut album last month, we're back with new releases for this month's CD review (our 69th total on the site), as we're looking at local grunge/punk solo project Telephone & Address' newest album "Rust Orchid"! The seventh album from this project (though the third since their recent local resurgence), "Rust Orchid" was released online via Bandcamp on February 17th, with physical copies being launched earlier this month at a CD release concert at The Gore Street Cafe. Featuring project founder Chris Shoust on all instruments, this album was recorded last fall, is SOCAN registered, and was again released through Harmisntus Productions. Physical copies (with slightly varying artwork) can be bought through Chris directly in limited quantities for $15, while digital copies on Bandcamp (with a totally different cover) cost the same amount, and can be streamed in full there too. As well, all song titles linked below are to their Bandcamp copies.

Featuring 16 tracks coming in at around 38 minutes in total length, let's begin this review with the first song, fittingly titled "One"! The first of six songs on "Rust Orchid" to run for under 2 minutes (and of 8 to be titled by their track order), this song gives our first glimpse of the direction of the album, as it shifts from the bass/drum aggression of "Need Not Apply" to an instrumental ambient rock sound, with "One" harboring a dark, repetitive melody that still maintains Telephone & Address' lo-fi recording nature. It's an interesting track, but it ends before you really get into it. Next is "Abstract Poem", which is the only track on "Rust Orchid" to surpass 3:30 in length, and the title is an accurate representation of the song. Feedback-heavy instrumentation, programmed drums, and hard-to-decipher spoken word recitations are the theme here. There's almost a techno vibe at times, and while it's different from anything I usually hear for the site, it's intriguing in it's own right!

Third is "Factory Song", which again has a fitting title, with the instrumentation, drum beat, and effects helping give a vibe of a factory or machine shop, albeit with beeping effects that sound like they came from an old video game. The song has a dark marching quality to it, almost as if there was a factory uprising, but this song does get repetitive by it's latter stages. That's followed by "Slow Time/No Time", a slower ballad that features minimalistic guitar work and heavily processed vocals reciting the song title in the background here and there. This trajectory never really changes, and while it gives an ominous vibe, it ends too quickly and it feels like it's going somewhere that never arrives. Fifth is the appropriately titled "Five", which is an album-low 16 seconds in length, and comprises mainly of a techno-styled beat that fades in and out. It's not bad sounding, but as it's so short, it's also hard to compare to what came before.

Sixth is "Looking Glass", which comes the closest yet to a "punk" sound, but still makes use of a trance-like quality, softer effects that almost sound like an xylophone is being played, and more spoken word recitations in the background, including what sounds like "Paralyze" being said at times. This song has good qualities, and the instrumentation is solid throughout, but it's arguably the most jumbled song yet for what is played and added to it. The next three songs are fittingly titled "Seven", "Eight", and "Nine", with "Seven" giving off the vibe of slowed down carnival music amidst it's ambient instrumentation, and though it is well performed, it never really deviates from the existing melody and gets repetitive fast. "Eight" is just 52 seconds long, and comprises of distorted music for it's duration that almost sounds like an mp3 file is glitching up, while still maintaining a musical beat. It's not much of a song, but it's interesting!

As for "Nine", it has more of a techno beat for it's melody, which is almost danceable, but doesn't harbour the dark ambient qualities of the longer songs that came before it. Catchy, but there's more substance on the tenth song "Traffic", which has a stop-start guitar riff that continues the techno-styled beat of it's predecessor somewhat. This song in particular sounds unfinished, almost as if it was written for a full band that wasn't there, but it's not a bad listen! The next three songs (and last to be titled by track order) are "Eleven", "Twelve", and "Thirteen", with "Eleven" harbouring a feedback-heavy sound with what sounds like a minimalistic keyboard melody over-top. This song is a little challenging to listen to straight through given it's repetition, and I'd like the guitar to be more prominent here. "Twelve" is a slower darker number that's more standard in structure, but again, it gets repetitive by it's latter stretch, despite it's short length.

"Thirteen" continues with the dark themes of "Twelve", but with more feedback and with a slower, more deliberate pace. This song stretches on a bit long, but the tone is fitting given the unlucky themes around the number 13! That's followed by "Plumbers", a slow paced song that has another deliberate structure, though with a nice slow guitar performance and a bit of a guitar solo, which is a nice change of pace! This song more than any other feels like a full band is present, but it's not as ambient or dark as some preceding tracks, nor as aggressive as material on old albums. Second-last is "Sunrise", which has an optimistic sound that adds as much lightness to the distorted ambient rock on "Rust Orchid" as you can, and while it is a bit muddled, it's well performed, and Chris showcases his diverse talents here! Fittingly, the album closes with "Sunset", which is dark in tone, but also minimalistic with it's guitar work and effects, but it does reflect the title, and it's an effective way to turn the lights off on this record!

So, what are my thoughts on "Rust Orchid"? Overall, this is one of the toughest albums I've ever reviewed for the site, especially as we've never really looked at an album like this before. When Chris Shoust hyped that this would be very different than "Need Not Apply", he meant it! There's few glimpses of punk or grunge here, instead with distorted, effect-laden ambient rock, and all instrumental save for a few early songs with spoken word passages. I can't say I was bored by "Rust Orchid", and there were some effectively entertaining songs (like "Abstract Poem", "Factory Song", and "Plumbers"), but I'd argue that some of the shorter numbered songs don't really stand on their own as full "songs", and others still got repetitive or jumbled by their last halves. I like and appreciate what Chris has done with "Rust Orchid", and while as a punk and metal fan at heart, I did enjoy "The Rotten EP" & "Need Not Apply" more, this is a bold album that definitely deserves a listen, and I'd be curious to see how these songs are approached live! Check it out above!

I hope you guys liked this month's CD review! So, what album is coming next to review on the site in April? I honestly have no idea, but here's what I can tell you. In terms of what's not coming next, we won't be looking at anything from Telephone & Address, Treble Charger, SweetKenny, or The Bear Hunters next, as we're not past our 6 month buffer period for them to prevent showing a bias to them or against other bands. Thursday's next "Where Are The New Albums?" post will have some possible albums, pending if any of them come out next month, but if no major new metal, hard rock, or punk albums come out next month that we can obtain, we'll dip into the archives, but with only a handful of April concerts currently announced, it's premature to see what could possibly tie in with a band or artist playing next month. If nothing works, might we look at a Rising Tide album for the first time, or perhaps Woods of Ypres' "Home" single? We'll know for sure next month, and stay tuned for a new news post tomorrow! Thanks everyone!
Posted by The Sault Metal Scene at 12:55 PM