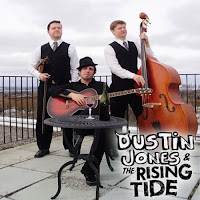 It's now time for our 74th monthly CD review at The Sault Metal Scene, and this month, we're taking our far overdue first look at an album from local/Toronto celtic punk favourites Dustin Jones & The Rising Tide! With no new metal or punk albums in my possession this month, we're dipping into the archives, and The Tide are a good fit to tie in with shows this month from The Boot Hill Crooners locally and the band itself in Southern Ontario. We'll logically start with the band's self-titled debut album, which was independently released on October 5th, 2009 and recorded over the previous year, though specific production and studio credits aren't readily available online (I don't own a CD copy yet to have liner notes at hand.) "Dustin Jones & The Rising Tide" features the band's original and current main lineup, with singer/acoustic guitarist Dustin Jones joined by fiddle player Sheldon Jaaskelainen and his brother, stand-up bassist Marshall Jaaskelainen.

Note that the band did not have a drummer when the album was recorded (Danno O'Shea didn't join until shortly after the album's release), and though 4 of the first 5 songs were re-recorded with Mikey Hawdon behind the kit for 2011's "Whiskey Will Be Our Sun", we won't touch on those versions until we review that album on the SMS. Copies of this CD can be bought for $10 on iTunes, their official website, and presumably both locally at The Rad Zone and at their concerts, while you can stream the whole thing on Spotify as well. Featuring 10 songs at 28 minutes in length, let's kick off this review!

The first song is "Molly Malloy", which also received a music video prior to the album's release. Opening with Sheldon's talented fiddle work, this song nicely shows The Rising Tide's sound, which was a change of pace from members' prior work in The Inner City Surfers and The Wild Turkeys. Taking on a clear drinking song vibe (as clearly indicated in the lyrics), you still get the punk sensibility from Dustin's raspy voice, and the carefree nature is fun, but the lack of drums may leave fans preferring the 2011 version. Solid opening that sets the tone well for The Tide's musical path! Next is "Hideout (Holy Church of Ol' T.O.)", a shorter number that has a slower, more country-influenced pace, with Dustin affectionately singing about the title location, a bar and concert venue in Toronto that the band often plays at on their Southern Ontario tour runs. Rousing number that has a nice sing-along cadence, and I imagine this is a crowd favourite when the band plays in ol' T.O., but it seems to end when it's just getting going.

That's followed by "Time Well Spent", an effective ode to good times with friends, and this continues the positive friendly vibes while still maintaining that punk kick, and the backing vocal harmonies are a nice touch! Good melody on this one, and it continues the laid back vibe that definitely feels like Dustin and the Jaaskelainens had fun recording and playing these songs! Fourth is the band's own self-titled track "Rising Tide", which is the only song of the album's first half to not have a re-recording in 2011, but honestly, the studio version doesn't need drums. Opening with harmonized vocals from all three guys about how "the rising tide is rollin'" (also the chorus contents), this is a more deliberately paced number that mostly strays from Dustin's punk background, so punk fans may prefer other tracks on the album, but it is effectively done and has easy to follow lyrics if you want to sing along!

The first half of the CD concludes with "Tick Tick Tock", also the album's shortest song, barely surpassing 2 minutes in length. Arguably the most punk-leaning song so far (complete with shouting of the title during the chorus), this song is aggressive while still maintaining the acoustic Celtic rock flavour, and it's arguably the song that would most fit a Surfers album so far! I just wish it was longer with more instrumental sections. Song #6 is "Summer Honey", a song about the title woman and affection for her, and I like the melody on the instrumental bridge, including some more prominent bass work from Marshall, but again, it's a little short. Still, another upbeat number with a nice Celtic flair that's been maintained from bell to bell!

Seventh is "Don't Know", which is the softest song so far on this disc, and arguably the most lyrically introspective so far, so fans of the upbeat drinking songs from before might need to adjust a bit here. It's well composed and a good change of pace, with Sheldon getting a nice extended solo section midway through. Personally, I do prefer the faster and more rousing songs to this one, but it shows The Rising Tide's depth and range well, and it's effective on that level! Then we have "Old Lady Luck", which is one of the album's longest and most country-centric songs, with the structure and lyrical content definitely giving off a classic 1950s-era country vibe. It's a good showcase for the Jaaskelainens' instrumentation, and Dustin handles the tone shift admirably, but strictly for my own personal preferences, I don't dig this the song at the level of earlier tracks. If you love country or bluegrass though, you'll be right at home!

The penultimate song on "Dustin Jones & The Rising Tide" is "Guy Like Me", which takes on a folksier vibe as Dustin sings about his personal traits and habits. It's seemingly a simple song, but there's a grand sort of ambiance to the backing music, and it's got a catchy quality. It's not as country-based as "Old Lady Luck", but it continues the slowed down pacing of the album's latter half, and it's strong for it's style! Also, I have a feeling this song in particular would probably work well solo compared to the rest of the album. Things wrap up with the album's longest song, "Don't Stop", which concludes the album on the more reserved, less punk-flavoured trajectory of prior songs, with a soft, introspective, and fiddle-heavy melody that would be the closest thing to a ballad on the CD. Personally, I would have ended the CD with an upbeat closer rather than the relative downer ending, but it's a nicely composed song with a nice message, and everyone holds up their end of the bargain, so give this one a listen if you like their folk/country side!

So, what are my thoughts on Dustin Jones & The Rising Tide's first album? It's a solid first effort that set the band's musical direction nicely, especially on the first half! Though a departure from Dustin's prolific prior band work (including for the all-acoustic instrumentation), he kept the punk attitude and sensibility with The Rising Tide, carrying his punk snarl and strong musical talent to this acoustic Celtic rock venue, and he's complimented well by Sheldon & Marshall Jaaskelainen, forming a skilled union of differing styles, with both handling their fiddle and bass roles with ease! However, Marshall's bass was often low in the mix on the songs, and I will concede that I do far prefer the punk-influenced first half of the album to the slower and more country/folk-based second half, which helped end the album on more of a melancholy note from the fun and carefree opening songs. It all depends on your personal preferences though, but that's just how I saw it.

The lack of a drummer was noticeable too, but the band has since answered that live and in studio. The Rising Tide fit somewhere in the middle of the spectrum between punk and Celtic folk, but they've found their groove and a loyal following in the last decade, and their first album definitely helped the cause, so give it a listen above, and don't miss their next local concert dates when announced! I hope you guys liked this month's CD review, but what album will get reviewed next in September? It's up in the air again, but you can get an idea of upcoming metal, hard rock, and punk albums in our next "Where Are The New Albums?" post on Wednesday, so stay tuned for that then! For reference, our next review will not be of a Rising Tide, Haggith, Mike Haggith, or SweetKenny album, as we're not past our 6 month buffer period for them to avoid potentially showing a bias, but a review of a 2015 Haggith CD could happen as early as November if things fall into place the right way.

Also, if you were wondering why we didn't review a Billy Bastards CD this month to tie in with their return to the stage in Ophir this weekend, it's because I don't own any of their albums yet (surprisingly enough), and full copies of them are not readily available online, save for scattered MySpace tracks. I hope to rectify that soon though! Of course, a new CD release gets precedence for a review next month, but if none come out or are acquired, another archive review (likely tied in with a show or shows in September) will follow, so stay tuned for our next review next month, and for more news this week! Thanks everyone!
Posted by The Sault Metal Scene at 12:00 AM