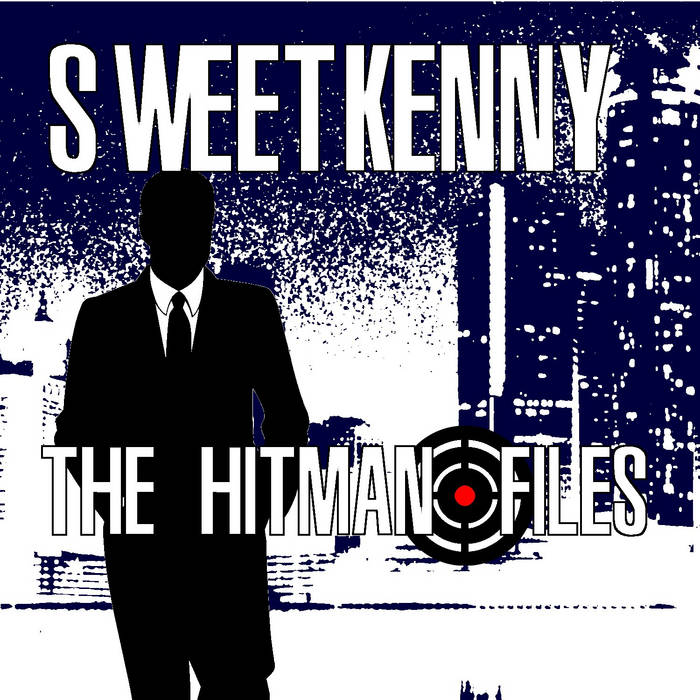 It's now time for our 79th monthly CD review at The Sault Metal Scene, and first of 2016, as we're taking a look "The Hitman Files" by Dafter, Michigan solo hard rock musician Ken Sutton, a.k.a. SweetKenny! Marking our sixth review of a SweetKenny album on the SMS, "The Hitman Files" was released on October 31st of last year, and is getting reviewed over his other three releases since last June as it's the heaviest of them. Keeping with his recent trend for his solo albums, "The Hitman Files" is an instrumental release showcasing Ken's work as a score composer, with the album as a whole themed as the backing soundtrack for an action or hitman-themed production, likely intended for a video game. Featuring Ken himself on all instruments as usual, this was recorded earlier this year at Waterfall Records, and is now on sale via SweetKenny's Bandcamp page for $12, and while it can be streamed for free there, consider buying it to support Ken's work!

Featuring 12 tracks at about 34 minutes, let's begin what should be a unique review with the first track, "The Hitman"! An ominous sounding opener, this song seems to set the mood of an introductory scene for a title character, and while the instrumentation takes a dark turn, Ken does lay down some nicely fitting guitar melodies and solos overtop of it! It's methodical and gets the job done for a score, but fans of Ken's regular songs may be wanting a more diverse track. Next is "I See You", presumably referencing when a hitman has a target in sight, and it keeps the slower, backing score vibe of the opening track, but ups the dramatic quality with a tenser feeling and a tinge of orchestration. I like this song a little more for it's ambiance, and I can see it fitting the scene I'm picturing in my head!

Third is "Cops Are All Around", which has more of an up-tempo, techno-influenced style that seems to suggest that the title is occurring in the universe of "The Hitman Files". This song has a very drum-heavy beat that actually calls to mind a tribal theme, which was presumably unintentional, and while it's my favourite of the compositions so far, it's also a little repetitive after a while. That's followed by "Armed To The Teeth", another higher energy track that seems intended for a gunfight or battle of some description. Good drum beat and some jam guitar help keep the flow here, and it doesn't grow as repetitive as some of it's predecessors, but it's not as catchy as "Cops Are All Around", and given the title, it could benefit from a faster tempo. Well composed though, as usual!

Song #5 is "Over the Top Power", which has a dark, methodic mood that feels like you're walking down a dark alley in an action film. It's an effective, if not overly long track that doesn't bear a lot of similarities with Ken's regular solo songs, but the ambiance, strong guitar melody, and catchy drum beat help make it an early favourite on this album! Then we have "The Contract", which arguably bears the most resemblance yet to SweetKenny's regular non-score albums, with his familiar guitar sound laid over a mid-tempo beat as the album's presented story continues. Well performed, and while there's no standout moment, remember that's it's intended as the backing score for a game or film. The shorter "Countdown" follows with an industrial-tinged hard rock performance that has a nice driving feel, good effects work, and an intense mood that should please fans of Ken's heavier songs,. It'd be very interesting to hear him flesh this one out with lyrics & a longer runtime!

Eighth is "Death Race", which is the longest song on "The Hitman Files", but despite the name, it's not overly aggressive or dark, instead harbouring a drum heavy rhythm. It's well composed, but it seems to loop a bit too long, and it does get repetitive by the end, but again, I have to remember that this is meant for a score and the sum of the parts, not a typical standalone song. Next is "Just Before the Kill", which is simply an ominous, dark, dirge that mostly sets the mood for a scene in the score, with the tension suggested in the title. It gets the job done for the score, but it shares little in common with most of SweetKenny's originals. "Power" follows it with a mid-tempo driving number that has a bit of an ethnic feel, and never gets too overpowering or aggressiver. It's light and listenable, and fits the score well, but one could argue that the vibe of the song doesn't suggest it's title

The penultimate song on "The Hitman Files" is "Really",  which relishes in a synth-heavy vibe that dominates the track, and is arguably the most unique song on the album. It's interesting, and reminds me a bit of "Mr. Crowley" at points, but fans of more typical SweetKenny material may not take to this one, unless you look at it as part of the score. The album comes full circle with "The Hitman: Part II", which is the shortest featured track, and while it's similar stylistically to it's first half, it's not as stylized or guitar-heavy, ending the story on a more reserved note. It's an effective closer, and wraps up an interesting album!

So, what are my final thoughts on "The Hitman Files"? Well, it's definitely one of the most unique albums I've ever reviewed on here, especially given it's intention as a score for video games or movies, and on that basis, I can definitely see what SweetKenny's going for! Since July or so, all of his new albums have been intended as scores, and while this one was picked over the others due to it's comparative heaviness, I can see it being used on a hitman-themed video game! While never too aggressive or in-your-face, it has darker, intense, and energetic songs that go along with the suggested titles, and each one is well done for what they are! Given my usual CD review experience, it's hard to judge this against anything prior that I've looked at (Haggith's "Apocalypse" albums may come the closest), so I don't feel right criticizing individual tracks is fair, as they're all pieces of a greater puzzle, and are meant to back up a main story in other media. On that basis, SweetKenny has delivered a solid score, and hopefully "The Hitman Files" and his other recent albums get used in that regard! Check it out above!

I hope you guys liked this month's CD review! So, what will be our second review of 2016 at the SMS? I have no idea at this point, but here's what our process looks like. Of course, precedence will go to a new album, and next month's "Where Are The New Albums?" post on Tuesday will outline possible releases to look for that might be next for us, so stay tuned then! Nothing imminent has been announced that I've heard yet, but you never know what might be said! An archive album would be a second order for next month if there's no major new releases that I can acquire, and while it's way too soon to guarantee anything, Haggith's "Apocalypse II" or "XIV" would be very possible as a tie-in with Project 421's concerts next month. In any event, another SweetKenny album or one of Bad Back's "VOLumes" demos would not be next, as we are not past our six month buffer period on either yet, which is in place to avoid potentially showing a bias. Stay tuned for more next month, and for more news and notes next week! Thanks everyone!
Posted by The Sault Metal Scene at 12:15 AM