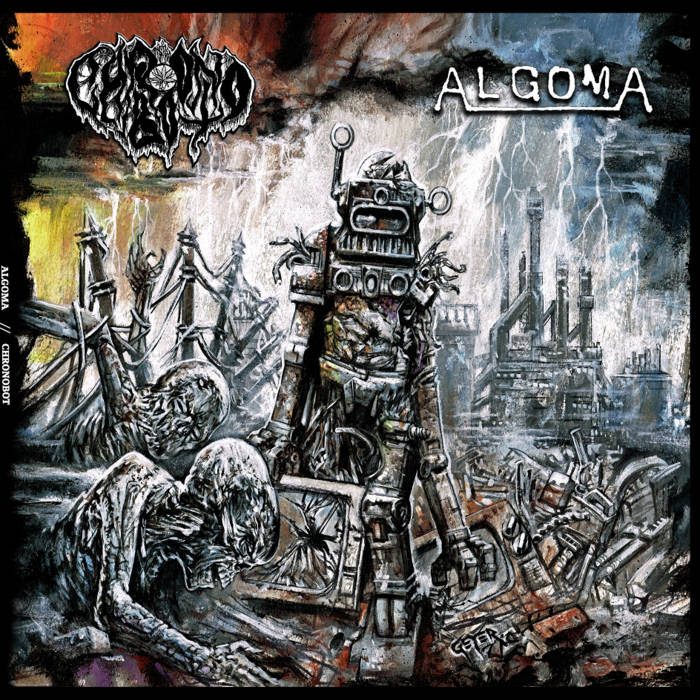 To end the month at the SMS, here's our 82nd monthly CD review, as we're taking a look at local doom metal trio AlgomA's split vinyl EP with Saskatchewan stoner doom quintet Chronobot! Released through AlgomA's label Deadbeat Media on April 1st of this year, and with artwork again by Adam Geyer, this is the second official studio release and first split from AlgomA, while this is Chronobot's third release and second split. AlgomA's half of the split was recorded locally over the past year at Six, Two, Oh. and mixed & mastered by Pixo Control bassist Dustin Goodall, while Chronobot's half was recorded at The Sweat Shoppe in Saskatoon, with producer and mixer Mike Lefebvre. AlgomA are again represented by singer/bassist Kevin Campbell, guitarist/vocalist Boyd Rendell, and drummer Jamie Vincent), while Chronobot's lineup featured singer/guitarist Dafe Landry, guitarist/bassist Quinton Anderson, drummer Cody Futerko, and keyboardist Darius Simonot.

Note that Chronobot currently feature a bassist named Scott in their public lineup, but he did not play on the split. Physical copies of this split (on clear blue vinyl!) are available locally at The Rad Zone, AlgomA concerts, and through band members for $20, and while this release is not available on CD (for now?), digital download copies are available on AlgomA's Bandcamp page (and Chronobot's) for $6, with song names below linked from there. The songs can be streamed free there too, but consider supporting the bands by buying it! Featuring 25 minutes of music, let's begin with AlgomA's half!

Side A of the split contains AlgomA's two songs, starting with "Phthisis", which is sung from the point of view of a man dying of pulmonary tuberculosis. Starting with reverbed guitar feedback and backing sound effects, this soon unleashes into a fast (for AlgomA) doom metal number that is arguably their most bass-heavy studio track yet, with Kevin laying in ferociously, but his vocals aren't as loud and clear as they had been on their debut EP (maybe it's intentional to represent having the title affliction?) I like the guitar effects, and it is fittingly crushing and doomy before it's abrupt ending, so fans should have no problem moshing to this one live! AlgomA's second & final offering is "Electric Fence", which packs a lot into it's eight minute runtime! Lyrically about an inmate trying to escape prison (a rare instance of the main character surviving an AlgomA song), this song has an ominous opening that sounds like a march to death row before the full band's doom onslaught kicks in!

Featuring Boyd on lead vocals, his high pitched screams are welcomed on this brutal song, with methodical drumming from Jamie and a down-trodden but undeniably heavy riff throughout, including some effective feedback breaks in between verses. The song goes on a little long (partly thanks to the extended instrumental opening), but this is a strong compliment to "Phthisis" that delivers a brutal wallop of doom metal, and all three guys are up to the challenge as usual, so fans will be right at home!

Chronobot take over side B of the split with three songs of their own, which run 3-5 minutes in length. Entitled "Red Nails", "Jerry Can", and "Sons of Sabbath", the latter's title is particularly profound, with a clear Black Sabbath influence propagating their songs, albeit with a spacey, keyboard-infused bent. "Red Nails" exhibits that mixture to a T, albeit with harsher guttural vocals, while "Jerry Can" is shorter, and goes fuller into their stoner side with some nice effects and a solid pounding riff, though the lyrics are somewhat repetitive when utilized. "Son of Sabbath" also pays tribute to the metal forefathers in it's sound, and if it was an instrumental, it might be hard to tell that it was actually Chronobot! Musically, these guys have a strong sound that combines old school doom metal with aggressive modern vocals, with Dafe & Quinton's guitar riffs always adding something to the material, and Darius' keyboard work adds that spaced-out flourish, with a clear chemistry from all four guys to boot!

So, what are my final thoughts on AlgomA and Chronobot's split EP? It's a very entertaining release for doom metal fans, with the two bands (well acquainted since their 2014 local show together) complimenting each other with their own heavy takes on the genre, with AlgomA's bleak devastation and Chronobot's retro stoner influence giving a little something for any metalhead! The decision to release the split as a vinyl record only (for physical copies) is a risk compared to what local bands typically put out, and given that many fans don't have record players, but it helps this EP stand out among everything else, and with that cover art, how could you not want a copy? With that said, this split isn't overly long, with only 5 tracks between the two bands, but both bands have other releases if you want more of either or both. AlgomA and Chronobot are both very skilled and entertaining entrants in the Canadian doom metal scene, and this split is well worth picking up for genre fans, especially with the vinyl revival!

Consider buying a copy A.S.A.P., and hopefully Chronobot come back to the Soo in due course! I hope you guys liked this month's album review, and as for next month, we'll likely be looking at local alternative hard rock quartet Id Iota's debut EP "Maudlin Fair", which was successfully released earlier this month during their Ontario tour, so look for that next month, and stay tuned for more news and updates shortly! Thanks everyone!
Posted by The Sault Metal Scene at 2:53 AM