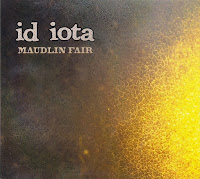 Now's a good time for our 83rd monthly CD review at The Sault Metal Scene, as we're looking at local alternative hard rock band Id Iota's debut EP "Maudlin Fair"! Independently released on April 14th at the beginning of their Southern Ontario tour run (with it's local launch coming one week later), "Maudlin Fair" was recorded from 2015-2016 at Unsalted Audio with guitarist Dustin Goodall producing, while the EP's tracks were mastered by Chuck Carvalho of Toronto's Joao Carvalho Mastering. A spiritual follow up of sorts to members' predecessor band Habitat Shuffle's 2014 digital EP "Sober Drift", Id Iota are represented by Dustin alongside singer Christian Lemay and drummer Blair St. John, with Blair handling the bass tracks, as sessions took place between Justin Girardi's departure from and Dan Linklater's addition to their lineup. Copies of "Maudlin Fair" cost $4 on Bandcamp and $5 at The Rad Zone or at Id Iota concerts, and while the songs can be streamed free on Bandcamp, consider buying it to support their work!

Featuring four songs at just 14 minutes in length, this will go by fast, so let's begin with the EP's first song, "California Wasted"!  Sort of taking on a surf rock, soft intro, Christian's vocals have a punk grit to contrast with the music, which gives it a punk anthem sing-along feel. Seeming to lyrically be about trying to make it to and enjoy California despite all of it's perceived faults, the guitar melody is nice on this song, and it's a catchy little number that flows well with the subject matter, but it's short length makes it feel like something was left out. Second is "Permanence In Pencil", seemingly a testimony about a lover's mental state and behaviour, with art and drawing used as a continuing theme. A very laid back song that reminds me a bit of a softer Sublime track, it has more of a bite in it's riffs, and solid drumming, but it does sort of meander at times, and could have more of a defined structure. Well done though from this talented group!

Third on Id Iota's debut EP is "One Cent Vaudeville", which appears to be from the view of a man who needs to drink and is conflicted in his relationship. Complete with sampled carnival music at the opening, this is the heaviest song yet on "Maudlin Fair", taking on more of the grungy alt-rock feel that we saw on Habitat Shuffle's EP. Dustin's guitar work is very solid, and Christian stretches his vocal limits well, but the drums are a little cymbal-heavy, and the song seems to end before a bridge that never comes. The CD closes with "Bitter Tea", which is by far the EP's longest song, running for over six minutes! Another song alluding to relationships and not wanting to accept the truth, the song also has a grungy feel, albeit with a swing-like jam cadence, with the heaviness building up in the second half. With the benefit of the longer runtime, this song actually is the best structured on the EP, and has a nice eerie ending, with all three guys delivering strong to close things, including nice lower-register singing and strong riffs!

So, what are my thoughts on Id Iota's first CD? Overall, it's a quality first effort from this familiar local outfit, and while it shares similarities to prior work, it continues their musical evolution! Transitioning from a laid back punk sound to the grunge throwback that Habitat Shuffle first brought us, Id Iota seemed to double down on relationship themes on this EP, which was excellently produced by Dustin Goodall, and the guys delivered well on each track! Christian Lemay showed good vocal diversity, Dustin's guitar work worked for each song, and Blair St. John's drumming was well maintained, though his bass playing didn't comparatively stand out. I did feel that the early songs were a little short and tended to wander around and not be as structured as they could be, but it built strongly to the heavier latter half, and the continuing lyrical themes seemed like they were inspired from real life. Not a bad first disc at all, so be sure to buy Id Iota's debut A.S.A.P.!

I hope you guys liked this month's CD review at the SMS! Now, what's coming next for a review on the site? At this point, I do not know, especially as no new hard rock albums have came out from local bands since "Maudlin Fair", but what might come if there's nothing new to look at? In terms of who won't be next, our June CD review will not be of Haggith's "Apocalypse II" or a SweetKenny album due to our six month buffer to avoid showing a bias in our review selections, but after that, things are very open. We usually tie things in with an upcoming concert for an archive review, which could lead us to a Blood Shed Productions act or a Telephone & Address album, though keep in mind that the former's releases typically feature a lot of explicit, minimalist content, and the latter's albums that we haven't reviewed on here are all out of print. In any event, there will be a CD review of some kind coming in June, so stay tuned for updates on it, and for more news soon! Thanks everyone!
Posted by The Sault Metal Scene at 2:03 AM