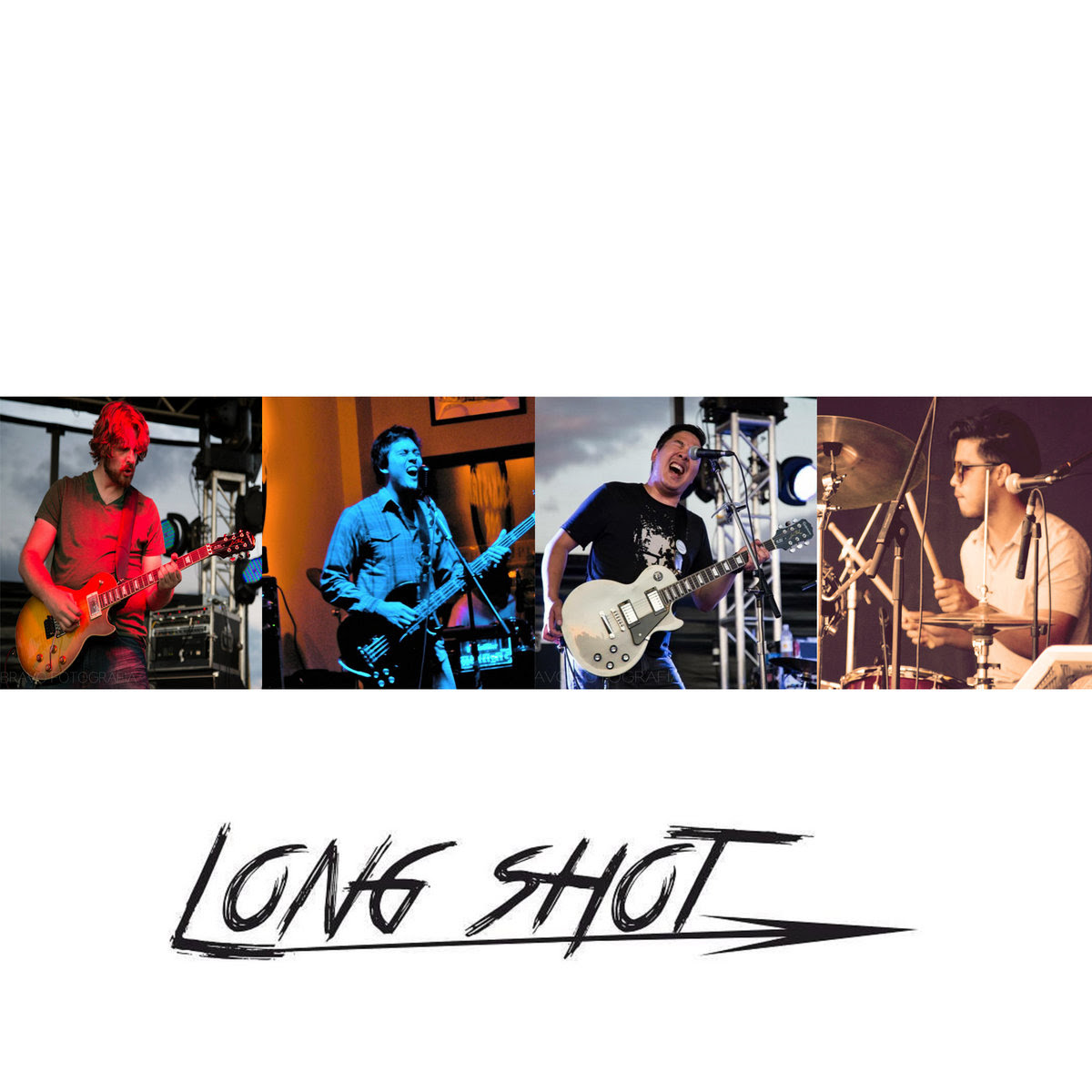 With a slow week upon us, let's keep things rolling with our 87th monthly CD review at The Sault Metal Scene, as we're taking a look at defunct local hard rock quartet Long Shot's self-titled EP! Fully posted (as far as I can tell) on July 13th via their Bandcamp page, Long Shot's sole release was self-recorded and produced earlier this year with their classic lineup, including singer/guitarist Evan Dawe, guitarist Nathan Muto, Evan's brother Adam on bass, and drummer Jeremy Ganuelas. "Long Shot" can be downloaded above on Bandcamp for $4 (or more if you're so inclined), and while you can stream all three songs there for free, consider buying the EP to support Long Shot's work! Note that I can't confirm if there was a limited CD run or not, and if so, if it had extra material (as three songs is short, even for an EP), but unless otherwise confirmed, we'll treat the EP on Bandcamp as the complete final release. Running for just 12 minutes, let's begin our latest review!

This EP begins with "Double Take", which opens up with a hard rock instrumental section that even has a bit of a funk guitar lick, and it has a catchiness to it! Lyrically about giving an attractive former flame a second look (for better or worse), the hard crunching riff contrasts with Evan's higher melodic vocals, which at times sound like they're for the wrong song, especially one with this subject. Musically, this song has a great flow, with Nathan shining on lead guitar, and Jeremy's drumming is clear and distinct, adding up to a solid opening number for hard rock fans, but some may find the vocals to be to much of a tonal shift.

Second is "The Beat", which is about patrolling on guard or "walking the beat", while trying to survive a number of described terrors alone at night. A longer & bluesier track, Evan's lower vocals suit this song better, but the somewhat processed singing makes it harder to hear him over the band proper, somewhat muting the ominous lyrics. Adam's bass pounds well, and Nathan gets another quality solo, and while blues rock fans will absolutely want to check this song out, I preferred the opener musically & for vocal clarity. "Long Shot" closes with "Long Goodbye" (almost fittingly, given their breakup a month later), though the lyrics reference leaving town & one's lover for an indefinite time. Despite the emotional lyrics, the song is a mid-tempo hard rocker that has the best matched vocals yet, though they could be louder in the mix, and the backing chorus vocals don't flow perfectly. Solid capper to the EP that showcases the guys' musical talents, but the song's end feels incomplete, like they forgot to record a final chorus.

So, what are my final thoughts on Long Shot's debut EP? There was work to do, but this was a solid debut effort that it's a shame we won't see a sequel for! Compared to their often more varied cover selections in concert, Long Shot showcased a nice hard rock base on these three songs (especially "Double Take"), and while this is a small sample size, you do get a sense as to why they finished second at last year's Speak Easy Battle of the Bands! Considering that these guys weren't widely known commodities before forming, they definitely made a mark here, with Nathan Muto playing excellently on lead guitar on all three songs, and Evan Dawe matching up nicely on rhythm, while Adam Dawe and Jeremy Ganuelas handled the low rhythm end in their own right, but Evan could show a little more grit and energy on vocals, and you could barely hear him on "The Beat". Long Shot had a lot of potential and a unique sound & presence, and whether they reunite down the road or not, check out Long Shot's debut EP above!

I hope you guys liked this month's CD review! Next month's review will definitely be on a new release, with Dafter, Michigan rock artist Ken "SweetKenny" Sutton very possible, likely for his April solo album "In Your Face", but that's not 100% certain. You guys may remember that I received an advance copy of The Apocalypse Afterparty's debut EP "Bufflesnort" last week, but the band hasn't announced a formal release date yet, so a review is still up in the air. A new surprise album could of course come before Halloween, but in any event, look for a new CD review next month, and stay tuned for this weekend's concert previews next! Thanks everyone!
Posted by The Sault Metal Scene at 2:38 PM