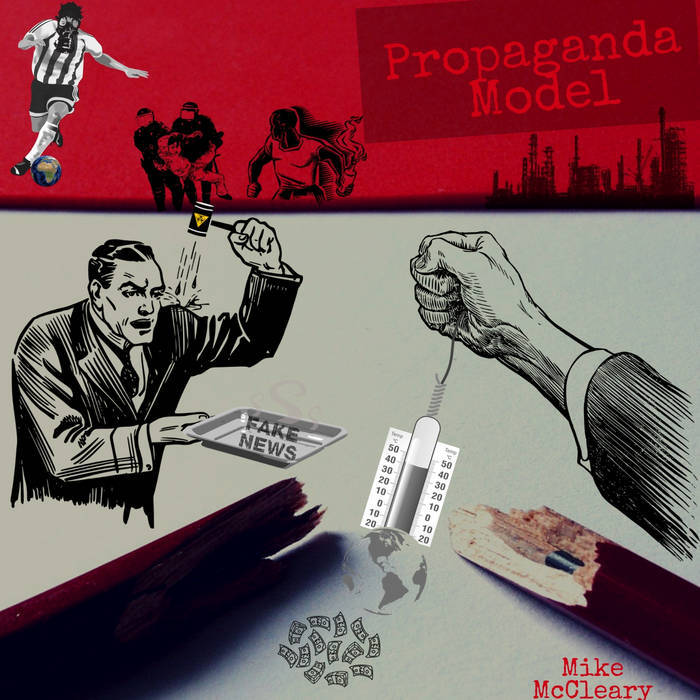 It's now time for our 116th monthly CD review at The Sault Metal Scene, as we're continuing our year+ long streak of new album reviews by looking at local hard rock solo artist Mike McCleary's sixth paid album "Propaganda Model"! Independently released on February 18th, this is Mike's first studio output after an 8 month hiatus from new releases following his busy first half of 2018, and this does return to his political & social issues wheelhouse for lyrics. As usual, Mike performs on all instruments on "Propaganda Model", which is on sale on his Bandcamp page on a "name your price" model, and while you can stream the whole thing for free there, consider buying it to support Mike's work! As usual, song names below are linked to their Bandcamp copies. With six songs running for about 23 minutes in length, let's begin this review with it's first track, appropriately named "Intro"!

Related in name & track placement only to the 18 second intro on last year's "The Party Album", this is a full instrumental song that Mike says is inspired by the Puppet Master horror movies. Intended "to start the album off with an eerie feeling", Mike accomplishes that with a slow and ominous pace, upbeat yet stilted xylophone-esque sounds, and uncredited female vocalizations early. This honestly feels like something you'd hear in a Tim Burton movie, if that's fair, but it's an effective mood setter! The first traditional song is also the EP's longest track, namely "The Hand That Feeds", which is about climate change and the need to act and respond to it's effects. After a softer intro, the song proper kicks into a fast and heavy pace, noticeably moreso than much of his 2018 material, complete with more aggressive vocals that sound like Mike is trying to channel Serj Tankian a bit. The bass is particularly strong and clear, and the thrash-inspired riffing has a nice gallop to it!

This song showscases Mike's diversity and heavier edge really nicely, and it'd be very interesting to see fleshed out with a full band in a live concert setting, so fans of his more aggressive material (musically and lyrically) should find something to like here! That's followed by the album's shortest song "Opposite Opus", which Mike says is about the "rise in false personas, hate speech, and news from untrustworthy sources" in social media and how it can control our daily narrative. Harbouring a melody that's almost reminiscent of circus music in the verses, Mike bridges well into a harder rocking chorus, though here, his singing stays at a quieter tone, just grittier where needed. A spoken word interlude in the bridge felt tacked on, and the recitations of the song name struck me as too lackadaisical, but the song has solid qualities at it's peak!

Song #4 is the EP's title track, "Propaganda Model", inspired by Noam Chomsky's model explaining how propaganda & systemic biases factor into mass media. Like on "The Hand That Feeds", I get a System of a Down vibe from the lyrical structure, but Mike's singing is more deliberately paced here, and the song largely stands on it's own musically. The drum rhythm fits well, and Mike does a good job with the call and response vocals in the bridge, but to me, the song relies too much on the lyrics and verses over the music, and despite it's 3:25 runtime, that seemed to recur for too long by the end. Fifth is "Y.V.L.M.", which Mike says is about the xenophobic corruption of patriotism & nationalism. I try to keep politics out of the SMS unless it directly affects local musicians and concerts, so I won't comment further on the lyrics, especially given the partisan tone & strong language within, but the acronym's very blunt meaning is given in the song.

That all said, this is Mike's heaviest & hardest hitting original yet, and he even lets out some extreme metal screaming at one point, so as a musical showcase, this will definitely appeal to fans wanting to headbang! The abrupt drum-fill ending isn't great, and the guitar could be more pronounced, but as a musical composition, this does the job! "Propaganda Model" closes with "High Horse", which is basically about how people shouldn't be jerks to other people or pretend that they're better than you (as in, being on the title high horse.) The song has a nice steady groove to it, with strong guitar work and solid bass, but his vocals aren't ideally placed. The monotone verses don't project the anger and annoyance the lyrics imply, the swearing feels forced, and the chorus vocals feel like they should be in a song with more of a punk base. The message is there, but I'd have approached the vocal styles differently to better compliment the music.

So, what are my final thoughts on Mike McCleary's newest album? It's a strong release that showcases his heaviest solo work yet, but it's not flawless, and the very political nature won't appeal to everyone (if you're right-leaning and/or don't like adult language, tread very lightly.) On this EP, Mike tackled full on metal with songs like "The Hand That Feeds" and "Y.V.L.M." with a lot of vim & vigor, and while there weren't really any full-on guitar solos, he has a gift for strong riffs, and his vocal range strikes me as having more to show than what he had on offer here! No song here is badly composed, and I'm eager to see where he goes next, but there's things I'd address. The production could use some beefing up to better accentuate the guitar riffs, some songs had repetitive qualities, I didn't think the vocals meshed with the music at all on "High Horse", and I'd have been curious to see this album run longer than it did, as it felt like it ended too soon.

If you can get past the lyrics on display here, you'll find a strong dip into metal waters via "Propaganda Model" that I'd love to see Mike expand upon, and if he has more in the works for 2019, here's hoping he can build on this album! Give it a listen above, and I hope you guys liked this month's CD review! So, what are we reviewing on the site next month? At this juncture, I'm leaning towards our first non-SweetKenny review of a Sault Michigan artist in many years, namely the debut EP from Banned frontman Alex Traynor, who is releasing his debut EP this weekend! Stay tuned for much more on Alex soon, and for concert previews next! Thanks everyone!
Posted by The Sault Metal Scene at 2:39 AM