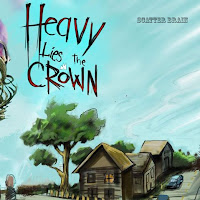 It's now time for our 127th monthly CD review at The Sault Metal Scene, and first of 2020, as we're taking a look at St. Ignace, Michigan progressive metal band Heavy Lies The Crown's debut EP "Scatter Brain"! The pictured cover artwork is a recreation of the physical copies, and the font I used for the album name is admittedly inaccurate. Independently released online on September 9th in advance of their Saginaw debut that month (with hard copies following in November), this EP was produced by Danny Vail and recorded in early 2019. The disc features singer Brandon West, guitarist Ted Olson, bassist Danny Tucker, and drummer Cale Krist, though "Scatter Brain" was recorded before Nathan Switzer joined the band on second guitar. H.L.T.C. did debate re-recording it with Nathan, but the original recordings are what is on the final product. Physical copies run for just $4, while you can stream the EP on Spotify, Amazon Music, Apple Music, and YouTube.

I do not know if CDs are on sale at a local retailer in the Eastern Upper Peninsula (Crooked Music, maybe?), but contact the band directly if you want to get hooked up, especially as they have yet to play a true local concert. Featuring four songs running for almost 13 minutes, let's begin this review!

"Scatter Brain" kicks off with it's longest track, "Thing 1", which has a soft and deliberate opening that nicely builds in instrumentation, with the soft vocals giving a Deftones-ish vibe early, but when the song puts the pedal down in the chorus, the aggression amps up well. Brandon's harsh screaming reminds me very much of Cameron Heacock from American Head Charge, which is not a bad thing! The song is well performed with nice intricate playing, and the late breakdown is a nice touch, but it doesn't feel as heavy and assaulting as it should, with the guitar almost buried in the mix. Next up is the EP's shortest song, "Choke", which is a full-on extreme metal song that is very nu metal-inspired. This has the pounding metal background I missed on "Thing 1", and it's a great showcase for Brandon in particular, though Ted's guitar work shines while it lasts, and Cale's drumming is at full force, especially on the bridge. Very entertaining song, if not as technically sound as the opener was!

Third on the disc is "Knucklebutter", which is another ferocious ripper of a song, though with more of a gradual and drawn out pace that suits the drumming and bass line really well, and the galloping riff is a nice touch. The pained clean vocals at the mid-point is too forced to me, and the background chatter and laughing late adds nothing to the song, but the sum is greater than the parts. "Choke" has the speed and intensity edge, but "Knucklebutter" feels like a more complete, fully realized song, and it's my favourite on the EP! The closing track is "Time Diffuser", which has a nice guitar melody intro (possibly the best guitar line of the disc) that pairs nicely with Cale's rapid fire drums. Like the opener, this alternates softer verses with aggressive choruses, but it's a shorter song, yet more inventive musically, and the rhythm contrasts well with the heavier elements. My big problem with the song is it (and consequently, the EP) ends so abruptly, when it felt like it should go on much longer, but it's solid until then!

So, what are my final thoughts on Heavy Lies The Crown's debut EP? Overall, it's a strong first outing for a very promising new-ish band, with lots of brutality and strong musicianship to go around! While ostensibly a progressive metal band, this has a strong influence from early 2000s nu metal, which isn't a bad thing (no one raps), so if you like bands like American Head Charge, you'll be right at home here. With only four songs, H.L.T.C. don't have much time to make an impression, but they're a talented ensemble, with Brandon's harsh screams meshing well with Ted's skilled guitar work, while Danny and Cale hold down the rhythms well, but there are times when songs could be pumped up with beefier production or a more prominent guitar line. The abrupt ending to "Time Diffuser" was a disappointment, and I'd have liked to have heard some guitar solos, though with two guitarists now, I imagine a second release would be more fleshed out on the whole.

"Scatter Brain" is an entertaining first salvo for Heavy Lies The Crown, and while I know the E.U.P. is not an ideal market for an extreme metal band to break through in, I hope they can make their mark locally and gain traction up here. Do your part by streaming or buying "Scatter Brain" at the above links, and I hope you guys liked this month's CD review! As for our February album review... I do not know what we'll be looking at yet, but here's what I can say. A new album would, as usual, take precedence in line, and our next "Where Are The New Albums?" post will give some ideas as to what may be coming out next! If nothing new comes out that I have access to, we'll dip into the archives for a review tied in with musicians playing locally in February, and one possibility could be "Flight 75", Haggith's live album from 2012, to tie in with members' debut show with The Bridge Heads next month. In any event, stay tuned for more news and notes on the site soon! Thanks everyone!
Posted by The Sault Metal Scene at 3:38 PM