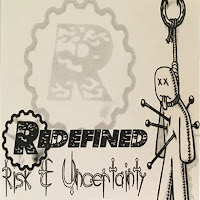 It's now time for our 135th monthly CD review at The Sault Metal Scene, and with new album releases not in any hurry at this stage of the pandemic, let's dip into the archives for a look at defunct local/St. Catharines hard rock quartet Redefined's debut studio album "Risk & Uncertainty"! Independently released after October 2001, their now-closed website erroneously credits this as a 4 song EP, possibly confusing it with one of the two preceding demos alluded to on their Geocities page's lyrics section. "Risk & Uncertainty" was primarily recorded at Easter Island Studio in Sudbury with producer Billy Bruhmuller, though the last two songs were done at Metalworks Studios in Mississauga. Redefined are represented here by future Driving Dave Home/Late Shift vocalist John Barber (recently of Parabol) and guitarist Matt Sibilo (now of Fort Creek), alongside ex-Swamped bassist Josh St. Amour and My Son The Hurricane drummer Dan (not yet Danno) O'Shea.

For the record, this review is tied in with Matt's concert at Reggie's Place with Fort Creek earlier this month. Physical copies of this nearly 19 year old CD are now out of print, but a free streaming copy was generously uploaded onto YouTube by the Oh!No Collective's Alex Moore last month, and song names below are linked to their timecodes therein. Curiously, the liner notes do not list the titles of the 10 songs on "Risk & Uncertainty", but the above lyrics page does confirm all of their names. Running for about 40 minutes, let's begin this long-awaited album review!

Redefined's first studio album begins with it's longest track, "Vertigo Center", which seems to be about trying to save yourself and be a better person. I like Josh's isolated bass tracks to lead into verses, and everyone performs well in hindsight, making this a good introduction to Redefined's very Tool-inspired sound, especially helped by John's vocals. Danno's has some catchy drum fills late, and I like how the song builds to heavy choruses, but softer lyrics can be muddled in the mix. Next is "Face Down", which seems to be themed around fear of the inevitable. The heavy choruses are where this song shines, especially compared to the somewhat shaky verses, with John's angrier singing flowing really well as the intensity varies. Strucutrally, this song isn't as technical as the opener, and it could use more lyrics, but it gives Matt a good showcase for heavy hard rock riffing, and while I may be biased from it's long presence on their old PureVolume page, it is pleasantly familiar!

The third song is "M.T. Bundies", which you may recognize as the heaviest track on the well-remembered compilation album "Foggy Style Volume 1", put out by the former Foggy Notions nightclub circa 2003. I already looked at this song on the SMS last June in my review of "Foggy Style", so I won't go into the same detail again, but I now know that this song is the shortest on "Risk & Uncertainty", and it's lyrics reference wanting to end a relationship. In short, I liked the tonal shift from the ska-inspired verses to the heavy choruses, and everyone delivers musically, especially Josh on bass, and this is a highlight on both this album & "Foggy Style"! Afterwards, we have the CD's partial title track "Risk", which seems to allude to unfairness & depression. I like the psychedelic guitar work, and as on "M.T. Bundies", this one veers a little away from the Tool influence in the intense chorus.

The vocals seem a little forced on the verses, the late breakdown feels out of place, and the ending on just a quiet drum hit didn't feel right, but this is a solid track for modern hard rock fans all the same! The first half of the CD concludes with "Fellow Bedwetter", a metaphorical title referencing a predestined fate you can't change. The first half of the song is largely a nice instrumental showcase, but when John jumps in, the Tool-esque sound becomes fully formed again, and the choruses are very catchy. The plodding bridge is a slight buzzkill though. Everyone gets moments to shine, and Matt & Josh are a good compliment in particular, so this is definitely another album highlight for me! Song #6 is "Shackles", where one speaks up against a bad influence or oppressor holding them down. The verses have an odd carnival music cadence to them, but like on "M.T. Bundies", they contrast well with the heavy choruses, and don't feel as out of place as the isolated bass in the bridge.

I am admittedly not a fan of the isolated moan before the last chorus, and I did detect some shakiness as the song got heavier, but the song works for fans of Redefined's heavier songs, if not as technical as some others. That's followed by "Mad At Me", which seems like it's about regretting not introducing yourself to a crush. This one has a little too much of a stop/start structure for my liking, and the solo bass from Josh is getting overdone, but John's singing is well controlled, and Dan's technical drumming is arguably his best yet on the CD! Definitely not my favourite song as a whole, but elements do work. Eighth is "Travis Walton" (I don't know if that's named after someone specific), which seems to be about confusion and mixed messages.  The fast instrumentation outside of the main verses is very welcomed by this metalhead, especially the crushing breakdown at the end, and I like the lyrics too! That said, this is by no means a technical showcase.

There are stronger compositions, but I can see this song going every very well live, and Matt & Danno particularly shine here. The penultimate song is "Insane Dog", which has themes of demanding & deserving honesty. A very Tool-ish structure to this song (not a surprise, given many of the players), this all works in it's favour, aside from Josh's isolated bass tracks, which are well performed but grind things to a halt again. I liked where it was going, but it felt like the song got too repetitive after a while despite strong musicianship. The album closes with "People On Skis", which is the most lyrically ambiguous song on offer, especially given the title. I like the staccato riff to start this one, and the song itself has a catchy, high energy rhythm with nice soaring vocals from John. Everything comes together nicely, including one of Josh's best performances, and it's a solid closer overall!

So, what are my final thoughts on Redefined's debut album, almost two decades later? While not perfect, this is a strong first effort with solid songwriting, especially given the guys' age at the time, and having a Tool-influenced band locally in 2001 must have been a thrill in that regard! Some songs definitely reminded me of Maynard and company, but others were primarily from John's singing, whch was a consistent presence, if shaky at times on softer verses. Matt showcased a good technicality to his playing, if sans guitar solos, while Josh's bass work had really impressive moments, and Danno's drumming was often very impressive, if a departure from the brasshop collective we all know and love today. I like the creative lyrics they used too, with lots of metaphors and a sparing inclusion of their song's titles. That said, there were things to address. Tool is a great influence, but it would have been nice to get more musical variety on offer. 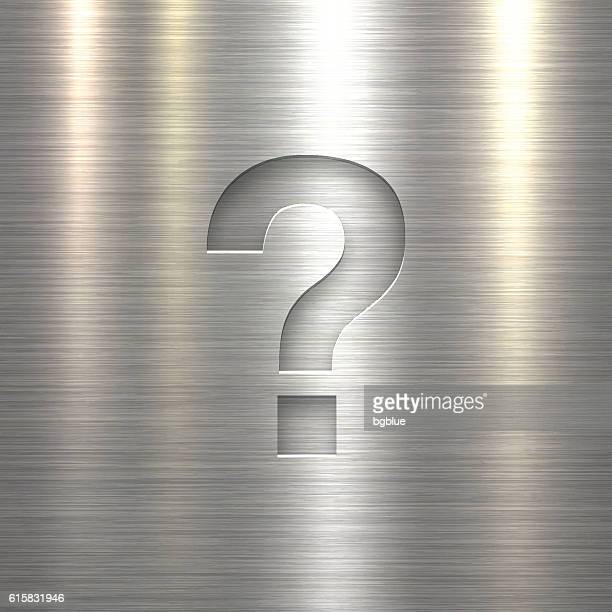 Guitar solos would have been a help, and the occurrences of Josh playing bass alone between verses got a little old after a while. The production quality was good given the age, but softer stretches could be muddled. I can't speak for Redefined's 2004 recording sessions that gave us "Pitters" (did the intended EP ever come out?), but "Risk & Uncertainty" was a solid debut from this talented band who had a lot more to offer through the mid-2000s, and it's definitely worth checking out for new and old fans alike! Give it a look at the above links, and I hope you guys liked this month's CD review! As for next month in this series, I am unsure what I'll be looking at yet, but here's what I do know. A new paid album release from a heavier or punk band will take precedence, and our next "Where Are The New Albums?" post will have hints to that end on October 2nd. If we have to dip into the archives again, our 6 month anti-bias buffer period remains in effect.

As such, do not expect Redefined's 2004 EP(?) or an Inner City Surfers or Chase Wigmore release next, but anything else unreviewed within genre range is fair game. Given the lack of concerts nowadays, I couldn't begin to suggest a convenient tie-in album yet, but who knows what the fall season holds, and I will keep you posted in the weeks ahead, but stay tuned for more news & notes on the site this week! Thanks everyone!
Posted by The Sault Metal Scene at 7:34 PM