It's now time for our 140th monthly CD review at The Sault Metal Scene, and this month, we're taking a look at new local punk solo project 9 Times Dark's debut EP "Vicissitude"! Independently released to major streaming/download platforms on August 26th, this EP was recorded last year at Relentless Audio with producer Ryan McLaughlin, who also mixed As It Stands' "The Lost Tapes" EP. 9 Times Dark are solely (I believe) represented by local musician Christopher Raginskis, though if I am missing anything re: the album's personnel, note that 9 Times Dark don't have a dedicated band page outside of album sale locations. Speaking of which, this handy CDBaby link lists most of the official services hosting "Vicissitude", but it can also be heard on Relentless Audio's YouTube channel for free, and if you want downloadable mp3 copies, Amazon has it for $5.94. With 6 songs running for about 15 minutes, let's kick off our latest CD review!

If you noticed the relatively short run-time for 6 tracks, there's a reason for that, as half of them are sub-75 second bridging tracks, two being functionally instrumental. "Vicissitude" opens with the shortest of all namely "Frequencies", which just has the sounds of Chris (I assume) getting into & starting a vehicle, and fiddling with the FM radio dial, complete with many frequencies being quickly scanned. Not much to it, but I think he did record original song fragments to play on the "stations". This song leads right into the first proper song "Funeral Home", which definitely has a horror punk vibe to it in both lyrical themes and Chris' somewhat deeper singing voice, which has a bit of a Mike Ness quality to it. This contrasts with an upbeat modern punk vibe, which is cleanly produced and they play off each other well! Strong music all around, and this is a good way to sample 9 Times Dark early! 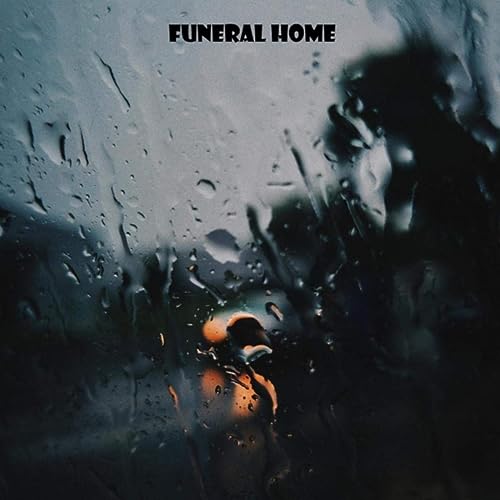 Third on the EP is "Celebration Of Life" (I'm noticing a theme), which is another short bridging track. Here, you get sampled dialogue of an angry woman, a vocal choir, and some processed effects over top of everything, and the woman helps segue directly into the next full song, "Last Date". The longest song on offer, this makes more good use of music contrasting with the words being sung, as this is seemingly an folksier acoustic number, but Christopher's lyrics & vocals (which remind me of Paul Kuhr from Novembers Doom in this setting) are much more sinister and downbeat. Not badly handled, I can easily picture this in a live-setting as a drinking song of sorts, but based on my musical tastes, I do prefer the more upbeat & rocking opener. The penultimate song is the last short bridging track, fittingly titled "The Bridge", but this one is a real song while it lasts.

If you liked "Last Date", this feels like a continuation of it in tone, with more of the downbeat low-register singing from Chris and a moody, dark tone. Again, not much of a song (barely longer than "Frequencies", but it fits where the EP has went. "Vicissitude" closes with "The Director", which brings things to a close on a punk trajectory (and you can probably guess that this isn't a movie director.) Musically, this really reminds me of Social Distortion, with less of the horror punk side despite the lyrical subject matter. While it's well performed and produced, and definitely full of interesting details you don't often hear in other punk lyrics, the song's pacing is a little flat compared to "Funeral Home", especially in the vocal levels. Not a bad song though! Fittingly, it closes with more FM radio dial fiddling as Chris arrives at his destination, bringing the EP full circle.

So, what are my final thoughts on 9 Times Dark's first EP? While it's very short, it's an interesting first foray that shows some relatively unique inspirations for the area! I believe Christopher took a lot of the funeral home lyrics from personal experience, and that definitely gives these songs their own flavour, and it helps to hear them together to see the story being told. The EP is lean, with only 3½ songs, but they showcase a good musical range, from gritty straight-forward punk rock to slow and downbeat numbers, and given the inspirations on offer, 9 Times Dark immediately have their own sound and place in the local scene. The production was very good, perhaps too clean given the music and lyrics on offer, and Chris is a solid musician, but I do want to hear more from 9 Times Dark in more ways than one, from this being a short EP, to the possibility of expanding beyond a solo studio project.

If you like Social Distortion-style punk bands, and/or some uniquely dark imagery in your punk rock, give "Vicissitude" a listen at the above links, and hopefully we hear more from Christopher and/or this project in 2021! I hope you guys liked this month's CD review, but what are we reviewing in March? I have an idea of what I'm looking at, and while it will likely be another new album, I'm not going to immediately state the name yet, as the album in question hasn't been publically announced by the act in question at press time. Stay tuned for updates, and for a weekend concert preview post on the site tomorrow, now that some shows are back! Thanks everyone!

Posted by The Sault Metal Scene at 7:38 PM