More Assorted News & And Updates From Woods Of Ypres!

Hey guys, here's the first of (likely) two posts today, as we cap off another busy month at the SMS! If predictions hold up, we'll finish the las two months with 74 combined posts, which is awesome! Thanks for swinging by over the spring! I do want to note that the second post today, which will debut the March Mayhem tournament semifinals, will probably be late due to prior commitments (vacation plans and such, I doubt I'll be around a computer this afternoon), so there will be an extra few hours of voting today for the quarterfinals. That said, here's the first post of the day, and it's another Woods of Ypres-centric post, including tons of new CD reviews, and some more news, so here's what you should know!

Firstly, this isn't exactly a new "video", but it does give an interesting new interpretation on a Woods of Ypres song! Last year, you may remember when SoundCloud user anomaly88 posted ambient slowed down versions of two "Woods IV" tracks, which you can still check out at this location. Well, I doubt this is the same person, but YouTube user NightShadeGrimm has made their own ambient remix of a "Woods IV" song, and it's now on their YouTube channel to check out! It's a slowed down ambient version of "You Are Here With Me" (In This Sequence Of Dreams", which has been mechanically slowed down by about 350% to produce a 7 minute ambient dirge! If you don't appreciate extremely slow and methodical ambiances, you probably won't appreciate what's been done here, but what NightShadeGrimm made has a haunting effect going for it! This may not be your cup of tea, but check out this new ambient Woods of Ypres track below!

Now to some brand new "Woods IV: The Green Album" reviews! I'm badly behind on these, so let's not waste too much time! Firstly, Daryl Adolph of Metal Temple gave "Woods IV" 9 out of 10 in a March 26th review, meaning "Almost Perfect" on their rating scale! He admitted not being impressed with Woods of Ypres initially a few years ago, but highly praised their doomy bleakness, stating that they're turning metal into "a true artistic form"! As well, Marcel H. from the metal e-zine Lords Of Metal reviewed "W4" earlier this month, opting not to score it. He praised it's sounds and instrumentation, but seemed to base the lack of a score on it's running time of 78 minutes, saying it dragged on and became monotonous. Constructive criticism which has merit, but the lack of a score seems wrong to me. Click here to see his review! On a more postive note, Sam Thor Rhodes from the website SoundShock gave "The Green Album" 7.5/10, calling it a good place to first experience doom metal, while also tying in a lot of the album's themes to war, which is an interesting view! His description of what you'll like if you like this album is amusing itself! Click here to read this review as well!

Continuing with "Woods IV" reviews, former Metal Edge editor Phil Freeman's review of the album is available to read at this location (among other sites.) He compares David Gold's voice to Brad Roberts of The Crash Test Dummies, and though he did have some criticisms, he called the obsessive gloom "hypnotic", recommending the CD for "those who are sick of fun." Interesting viewpoint! As well, "Guido" of the metal blog Dose of Metal reviewed "W4" briefly on April 5th in that week's Spotlight post, giving it 4 skulls out of 5! He admitted being fond of the depressing lyrics, praised the transition in sounds, and said he enjoyed it "as much as you can enjoy songs about suicide & loss." Check the above link for more from that review! Finally for today, Mathias Freiesleben from the German metal site PowerMetal.de gave "W4" 9/10 in this review from April 6th! It's in German, but a quick run through Google Translate will make it somewhat readable. It's positive in tone, but kinda long, especially when the translations come out jumbled like they did for me. Still, check it out and see what you can decipher! 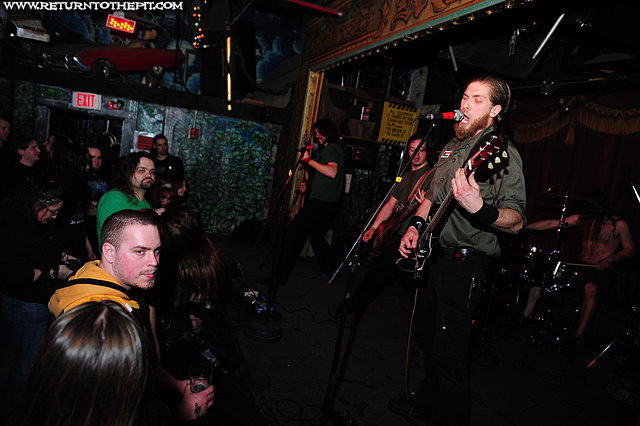 Let's close with some assorted Woods of Ypres stories! I was hoping to include interviews here, but both the ones I was hoping to feature aren't loading for me, though I have more stuff to share! One is a very well written article on Woods of Ypres by the metal website Unseen Underground, which concisely details the band's history, evolution, and sound! Also including some nice interview excerpts from David Gold, check the above links to give it a look! I'll finish with some new Woods of Ypres concert photos from their most recent East Coast tour leg, including this extensive album from Woods of Ypres' set in Worcester, Massachusetts on March 17th by Return To The Pit, and these photos taken by blogger Phil M. Noir from their New York City show the previous day! The Return To The Pit photos are awesome & high in number, but Phil's have merit too even if the quality is lesser! Check the above links for all these, and more!

That's all for now, but stay tuned later today (at some point) for a LOCAL CONCERT ALERT and the newest SMS March Mayhem updates! Thanks everyone!
Posted by The Sault Metal Scene at 2:24 AM