Here's a packed news post to close today out, our capping four straight weeks of new updates, with more to come! Today, we have the latest band updates for some upcoming Dismembertainment concerts, Woods of Ypres' latest tour vlog, and a new local band looking to play here, but first, here's some SHORT NOTICE LOCAL CONCERT ALERTS!!

The next Roosevelt Hotel punk night is TOMORROW NIGHT, once again on short notice, though if you looked quick, you might confuse it for a metal night! Why is that? Well, maybe it's because local death metal bands The Bear Hunters and Skull After Betrayal will BOTH be playing tomorrow! Neither strike me as punk in the slightest, but hey, good music is good music! While The Bear Hunters are no strangers to the stage, this will be Skull of Betrayal's second ever concert, and hopefully they're better prepared to rock out tomorrow! Also joining them tomorrow will be cello/punk trio RedD Monkey, who'll look to rock out with their entertaining mix of classical sounds and aggressive riffs tomorrow night! Apologies for the short notice, but all but one of the punk nights have been announced on a relatively short notice schedule, it's out of my hands. There's no cover charge tomorrow, you must be 19 to enter, and it all starts at 9:30 PM or later! For more details, click here! Sounds like a good show, but I would like to see more "punk" bands on these shows, like Frightlight or bands like that. It's all good though! Stay tuned tomorrow for a more in-depth preview of this show!

Meanwhile, local classic hard rockers That's Chester are taking the stage on short notice this weekend when they hit Docks Riverfront Grill! Upon some further research, I found out that this weekend was originally set up to feature two concerts from That's Chester's Greg Simpson and Ric Datson's country band Bone Yard (as confirmed at this location), but it looks like there's been a band shift, thanks to this Facebook event page! With that said, I don't know what happened to Bone Yard, but hopefully nothing bad happened! It also looks like their previously scheduled shows there next weekend are off now, so maybe they were moved? The band never confirmed that, so I'm treating these as new shows unless I hear otherwise. So if you're a fan, get yourselves ready! They'll be on at 11:00 PM on Friday and Saturday night, there will be a $4 cover charge, and you must be 19 to attend! For more details, visit the above links! Short notice is better than not at all, and That's Chester should put in a fun weekend of rocking tunes, so head out to Docks if you can! Again, I'll have a preview of these shows tomorrow on the SMS, so stay tuned!

Thirdly today, here's some lineup updates for some upcoming Dismembertainment shows! First, the bad news, as it looks like Woods of Ypres will NOT be playing at Foggy Notions on May 13th. I don't know why yet, but the show's no longer listed on Woods of Ypres pages, Dismembertainment's show listings have removed them, and Rich Moreland did confirm the news with me this evening. Why are they out? I don't know, but hopefully nothing bad happened! Hallows Die and local openers WILL STILL BE PLAYING THAT NIGHT, so don't change your plans! Now, for good news, as here's the latest band additions! Local death metal band Bring The Fallen will end a three month hiatus by playing at the Rosie metal night on April 14th, despite earlier claims about taking a break! They were originally listed for this show, then removed, but they're officially back on now as headliners. Great to see them back! As well, the April 28th Rosie metal night will feature hardcore quintet Changing Waves as the opening band, joining State of Misery and a to-be announced band. Good to know, they're very promising! Finally, WinkStinger and Shit Liver will open for Fuck The Facts at The Rosie on May 9th, giving a nice local punch to open for them in their return! Sounds good, check out the above links for more details on all of the above shows and bands!

Next up, here's another band that's looking to play in Sault Ontario this year! I got an e-mail the other day from Rob Heavysege, the frontman of the Winnipeg hardcore band Wear Your Wounds, and he's hoping to bring his band to town in June! The band's hoping to come through Sault Ontario for a concert on Sunday, June 5th, and they'd be bringing fellow Winnipeg hardcore outfit Abstract & The Artist with them on this tour! If you enjoy hardcore and metalcore, you'll probably enjoy both bands, and it'd be cool to have them playing here in June! I sent Rob some promoter info, but just in case you guys want to help or are interested in booking them here yourself, contact the above links and/or send an e-mail to wearyourwounds@gmail.com A.S.A.P.! Both bands are talented, so definitely remember this potential show, and if it gets finalized, I'll have more for you guys when it comes in! 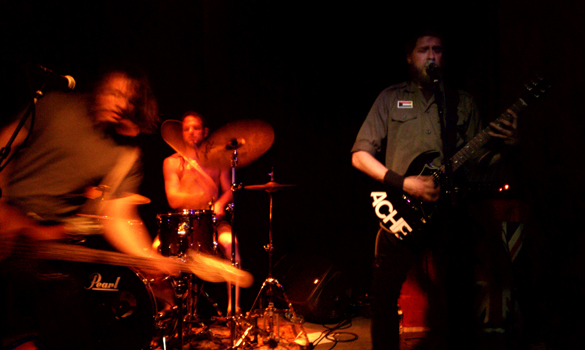 Finally, here's part 2 of the latest Woods of Ypres tour vlog from their Barrie concert! I'd wait for part 3 too, but we need some good Woods of Ypres news after learning they aren't coming home in May. Uploaded to frontman David Gold's YouTube channel yesterday, this starts with 2 minutes of in-car footage, including some duplicate shots from the first part of the vlog, and more rim rolling, before transitioning to the band's final drive to the venue, bringing in the merchandise, and related happenings until the concert footage finally kicks in at 3:12 into the video! We get portions of three songs, good quality ones too with more varied angles, and they now have added captions which list each song's original album as well! The concert footage will likely conclude in part 3, but it hasn't been posted yet. Good stuff, especially if you've been hoping for more live footage of Woods of Ypres on-stage! Check the above links for more, and here's part 2 of the Barrie vlog!

That's all for tonight, but stay tuned tomorrow for weekend concert previews and possibly some additional news! Thanks everyone!
Posted by The Sault Metal Scene at 10:55 PM