Second post of the day is now, and remember to check out our Saultites In Out Of Town Bands Profile on The Heatseeking Moisture Missles in the post below! Today, we'll start with a SHORT NOTICE LOCAL CONCERT ALERT, but we'll cap off with the latest SMS March Mayhem updates, as we hit the halfway point of the second round! And yes I have a news post coming tonight as well in a rare triple post day, so let's get right to it!

This was partially a Facebook exclusive from yesterday afternoon, as I wasn't planning to post a new news post yesterday, but I had to get the word out on this before it was too late. As it turns out, this weekend certainly was busier than we had predicted, as River Witch also played/are playing this weekend! At 6:00 last evening, the band announced on their Facebook page that they'd be playing at The Bird last night and TONIGHT, which has to be one of the closest short notice announcements I've seen for a show in quite a while. So I plugged it on our Facebook page last night to ensure it wasn't forgotten about, and I promised to lead off one of our posts today with it, so here we are! Remember, TONIGHT'S show (just like last night's) is a 21+ affair with no announced cover charge, and it starts at 10:00 PM tonight. Apologies for the short notice, but it's out of my hands. I wish River Witch would update their shows and pages in further advance than they tend to do, but hey, what can I do? They'll still deliver some solid hard rocking shows this weekend, so check the above links for more details, and if you saw them last night, hopefully you had fun! Remember, they're back at The Bird TONIGHT at 10:00 PM!

What do you guys think? I figured As It Stands would win given their solid local following, though The Bear Hunters kept it close and proved their own growing prominence in the scene, which is about what I expected! Destroilet pulled out a second straight blowout win, though the fact that Browbeat 101 officially broke up didn't help matters for them. Still, leaving them in was only fair! Frightlight got tons of votes, again showing the fanbase that's helping them do so well in the Vans Warped Tour Battle of the Bands voting, though it did come at the expense of Garden of Bedlam, who I thought would have finished closer! I'm really surprised at that, though their slow activity of late couldn't have helped. And Lion Ride's win over Half Past was what I expected, though I should note that Half Past had a solid lead for the first half of the week before Lion Ride surged in front to lead the week's voting. Good on Half Past though for a solid finish! With all that said, here's how the brackets now look for the tournament! 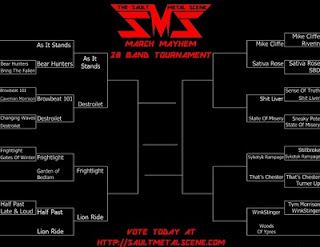 As you can see, As It Stands will collide with Destroilet in the quarterfinals, and Frightlight will continue their gauntlet run against Lion Ride, with these promising to be two highly voted matchups! The voting for these begin next week, along with the other quarterfinal matchups from the rest of the 2nd round winners. Speaking of which, those remaining second round contests begin TODAY, including the remaining seven first round winners and the last byed entrant. Without any further adieu, here are the final second round matchups! 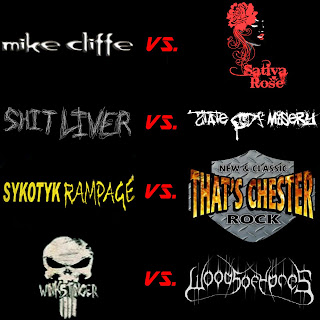 Can solo artist Mike Cliffe pull off an upset against fast rising metal quartet Sativa Rose? In the battle of young local death metal bands, can Shit Liver's grime sounds take out the more extreme stylings of State of Misery? Who'll win the matchup of crash punk & classic rock when Sykotyk Rampage take on That's Chester? And can WinkStinger continue their run by spoiling the tournament debut of noted local doom metal quartet Woods of Ypres? The Cliffe/Sativa Rose & Shit Liver/SoM winners face each other next week, as well as the Sykotyk Rampage/That's Chester & WinkStinger/Woods winners in a quarterfinal matchup next week too, along with the winners from this past week, so keep an eye out! The second round ends with these four matches, so to decide the last quarterfinalists, VOTE TODAY in the polls on the left! No risks, no biases, just pick your favourites and help get their support up for the next round push! YOU HAVE ONE WEEK, so make your votes heard!

That's all for now, but we have a new news post coming tonight featuring a LOCAL CONCERT ALERT, Cinderella fallout, the return of a promising local band, and more! Thanks everyone!
Posted by The Sault Metal Scene at 2:30 PM

I guess opening for a cartoon band dont hold much water eh...lol

I assume you mean Garden of Bedlam opening for Kiss? Hey, it all depends who votes and when, and Frightlight's increased prominence of late combined with Garden of Bedlam's recent downtime is probably factor. Where they were seeded is fairly stacked too!