Hey guys, I apologize for this being later than it usually is, but that's the joys of vacation plans. This post shall lead off with a LOCAL CONCERT ALERT, but then we'll transition into the latest SMS March Mayhem updates, including the debut of the final four! Let's get things going!

Brimley hard rockers Half A Man are playing a rare all ages concert on The Fourth of July! This will serve as both an official outdoor show and as a Fourth of July barbeque to take place at 6816 South Main Street in Brimley. I believe this is likely at or near a band member's house, but don't quote me on that. This event has a 1:00 PM start time, but I imagine the band might not play until later. It is definitely an ALL AGES show, and there is no listed admission price. For more details, visit the official Facebook event page! Sounds like a fun time, and what better way is there to spend both Independence Day & the SMS' 4th anniversary? Details aren't entirely out there yet for what's going on, but stay tuned to the above links for info as it comes in!

Now it's time to update the SMS March Mayhem bracket as we finish the quarterfinals, narrowing the bands down to a final four! Who made the final four? Here's the results of the third round!

As It Stands def. Destroilet 35-17
Frightlight def. Lion Ride 39-19
Mike Cliffe def. Shit Liver 109-106
Sykotyk Rampage def. WinkStinger 48-22
What do you guys think? As It Stands' victory is what I predicted, though it was a bit more of a blowout than I was predicting. Destroilet had a good run though! Same goes for the Frightlight/Lion Ride match in terms of the finish, as I thought Lion Ride would have at least lost by a closer amount. Mike Cliffe's surprising Cinderella run continues with a stunningly high vote total, narrowingly beating Shit Liver in this past round! Who'd have thought we'd get over 200 votes on a matchup? Sykotyk Rampage's win of WinkStinger is also a surprise, though their fanbase is quite devoted! So these are the quarterfinal winners, and here's the updated tournament bracket! 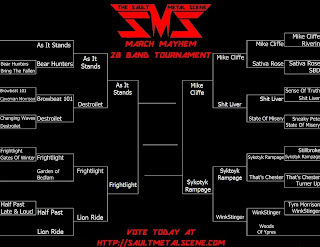 Can Frightlight continue their gauntlet run in the tournament with a victory over hardcore mainstays As It Stands? And in the battle of surprise semifinalists, can Mike Cliffe pull off yet another upset victory as he takes on Sykotyk Rampage? The winners of these matchups face off in ONE WEEK in the finals, so VOTE TODAY and pick your finalists! That's all for now, but stay tuned for more news very soon! Thanks everyone, and GET VOTING!
Posted by The Sault Metal Scene at 6:03 PM