Hey everyone, its time for another news post at the SMS! We're mostly gonna detail the March Mayhem bracket, but we will start with some new bands on three upcoming concerts, and later tonight, I believe we'll have a new news post with some more stories from the last while! So let's begin this post!

I have new bands added to three upcoming Dismembertainment concerts! Firstly, local death metal quintet State of Misery have been added to the lineup of the next metal night at The Roosevelt Hotel on April 14th! This is sort of unexpected given that they're playing on April 28th as well, and there usually isn't the same band at consecutive metal nights, but they should do well! State of Misery join Desbarats' For All That Is Lost on the bill, and my source is drummer Nick Kainula's Facebook page, where he was asked by organizers if they wanted to play beforehand. Also, WinkStinger have been added as the local openers for May 23rd's Isosceles Project concert at Foggy Notions! My source is the official show poster which you can see at this show's Facebook event page, and if that's not a good source, I don't know what is! WinkStinger will fit right in as openers, joining fellow extreme Ontario acts Thekillingfield and Like Animals! Finally, Winnipeg metal band Annex Theory (featuring former Quo Vadis singer Trevor Birnie) will join Laika at the August 25th metal night at The Roosevelt Hotel, as confirmed on their summer tour's event page! I'm impressed with them, good extreme sound and awesome vocals, remember this show come August! Check the above links for more!

And now, it's time to update our SMS March Mayhem tournament brackets, and begin the last polls of the first round! Yeah, I know it's April now, but why change the name when "March Mayhem" flows so well? With two weeks of voting in the can, we're now down to 20 bands, and I again want to thank you all for voting so well in most of these matchups! Though only one of the polls crossed 20 votes, we got good results for all, so, here are the final totals for the 5th-8th first round matchups!

What do you guys think? Half Past's win isn't surprising given their higher local profile compared to Late & Loud, who are relatively new, but with Half Past's scattered activity of recent months, I figured the results would be closer. I expected the Mike Cliffe vs. Riverin match to have low votes because they aren't the most well known bands (no recent concert history doesn't help), but thanks to those of you who did vote! I had no idea who'd win, but congratulations to Mike on pulling it out! Sativa Rose's win over SBD wasn't too surprising either, they've made more waves in recent months than SBD, whose concerts are less frequent, and I'm sure their genres helped influence the votes. Shit Liver's win of Sense of Truth was really interesting, in what was the only real "close" fight of the week. Though they never led, Sense of Truth were neck and neck with Shit Liver all week, and with that kind of a high result, imagine how it might have looked had they not been on such a long hiatus! But Shit Liver's loyal fans helped them win it all, and they're moving on to the next round! Now, here's the updated March Mayhem bracket! 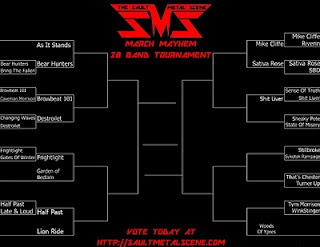 As you can see, Half Past will now face Lion Ride in the second round of the tournament, thanks to Lion Ride's first round bye. Mike Cliffe will face off with Sativa Rose in the next round, and Shit Liver will clash with the winner of this week's Sneaky Pete/State of Misery match. The Half Past/Lion Ride match starts NEXT WEEK, with the remaining second round matches taking place in two weeks, so remember that! Other than adding the winners for the next round, nothing's changed to the bracket itself. With all of that said, the final 1st round polls for March Mayhem are now online, and the same rules apply as before. You have one week to vote, it's one vote per person, and pick your favourite band in each of the four matchups below with the polls on your left! 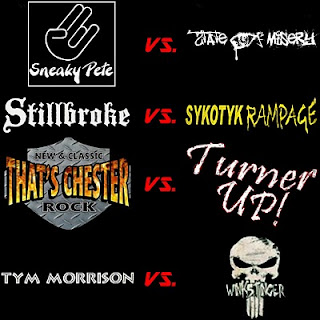 Can veteran local hard rockers Sneaky Pete take out fast rising hardcore quintet State of Misery despite not debuting on stage until Friday night? Despite their long hiatus from the stage, can Stillbroke overcome the crash sounds of Sykotyk Rampage? Who will win the battle of classic hard rock cover bands when That's Chester collide with Turner Up? And can Tym Morrison's acoustic solo project overcome the extreme stylings of WinkStinger? The winners of all of this week's matchups will collide in two weeks, where the Sneaky Pete/State of Misery winner faces Shit Liver, the Stillbroke/Sykotyk Rampage & That's Chester/Turner Up winners face each other, and the Tym Morrison/WinkStinger winner faces Woods of Ypres! So there are our last March Mayhem first round battles, and to vote, the polls are on your left! VOTE TODAY, YOU HAVE ONE WEEK! And remember, next week, the second round begins with bands whose names are between the letters A and L!

That's all for now, but VOTE IN THE NEW TOURNAMENT POLLS TODAY, and stay tuned for another news post later tonight! Thanks everyone!
Posted by The Sault Metal Scene at 2:06 PM