We're very behind on news around here, so let's get another post up on the site, our 8th in the past 5 days alone! This is completely dedicated to news, including details on a local concert venue's impending move, some lineup news for the upcoming battle of the bands, a local metal act's new original recordings, upgrades to a popular music site's layout (and how your bands are affected), and another local metal band's latest updates, so here's what you need to know! 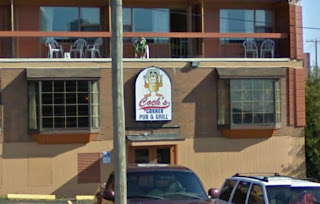 Local bar/concert venue Coch's Corner's days at it's current location will end next weekend, according to recent Facebook postings. Employee (and Frightlight/T. Rex Manning frontman) J.D. Pearce has revealed on their Facebook group that this coming week is their "last week" at the old Days Inn location on Bay Street, and they're serving discounted food and Caesars through the end of next week. Final events will include an open mic night on Tuesday and an all-you-can-eat pasta dinner on Thursday, with proceeds going towards the move, which is expected to be to the old Foggy Notions/Feedback location at 708 Queen Street East. Coch's Corner pages haven't publically acknowledged that they're in fact taking over the Foggy's building, but from what I understand, they apparently purchased the lease to the location earlier this year and have been renovating the interior in recent months. Note that there's been exterior renovations around the old Coch's Corner location recently too, but I'm not sure what will exactly become of that. An opening date for the new Coch's Corner has not been announced yet, but I don't believe it's coming right away from what I've read online.

I've always liked Coch's Corner as a concert spot, especially it's warmth, usually free admission, and solid concert bookings since I hit drinking age, but I assume that the move will be a benefit for them, especially with such a nice location as the old Foggy Notions building! I just hope that they handle the noise complaint issues that dogged Foggy's are addressed well, as that's an elephant in the room no one wants. I don't know what's happening to the old Coch's Corner spot, but hopefully it's used well in it's next purpose, and if you love Coch's, head there this coming week to send it off fittingly until the move and re-opening! Stay tuned for more on this as it comes in!

Next up, here's the latest updates towards the Sault Humane Society Battle of the Bands next Friday at The Grand Theater! The current lineup appears to be three bands smaller, partly because classic hard rock quintet Turner Up & funk rock trio The Vertically Impaired have both been removed from the battle's lineups on their online pages. I have not heard any reasons for their withdrawl, but hopefully nothing bad happened to them! The other band that has dropped out is local blues rock quartet The Moves, as per conversations I had with bassist Nathan Bouliane Thursday morning. Their withdrawl is due to external commitments, which include work that drummer Dave Pihlaja has with the Manitoulin Island folk project Lyndon's Frozen Lake that day. It's disappointing to see them drop out, especially knowing the battle success that their members have had recently (every member has been in a battle winning band), and I had pegged them as an early dark horse to watch at the event. Hopefully the three bands are back out there soon, they're all very talented! Replacements for the three bands are not being sought, so the battle will now have 9 bands at the most, but it's still a huge battle with lots of metal talent, so stay tuned for more updates as they roll in!

Thirdly today, remember how local extreme metal quintet Winkstinger has apparently been working on studio recordings towards a debut EP? Well, five unmastered original songs from the sessions have been posted onto the band's new Soundcloud page, so we can check out some of their recent hard work! The posted songs include their originals "Stop! You Can't Interrogate Someone With Brain Damage!", "Sadist", "Move It, Peenie Weenies, My Hands Are On Fire", and two songs I don't recognize off hand with the titles "Bidniz" and "Nunya", so click the above links to stream each new song! I don't know if this is all they recorded or not, but it'd be cool to hear studio versions of songs like "Fuck The Rest" and "Where'd We Go Wrong" too! Still, these are nice to hear in clearer quality, but you can tell they're not mastered yet. Assuming that these still have a physical release in the works, I won't give detailed thoughts on them yet, but if you enjoy Winkstinger's chaotic and often amusing concerts and originals, definitely stream these tracks, and I'll keep you posted if we hear more from these recording sessions!

lso in the news today, here's the latest stuff from local classic metal quartet Late & Loud! Remember how they hinted at possibly releasing their debut EP at the Sault Humane Society Battle of the Bands that they're competing in next week? Well, don't get your hopes up, as they revealed in a posting on their Facebook page on Monday that the release has been postponed. A reason for the delay wasn't announced, though they admitted being bummed, while adding that "awesome recordings take time." The current tentative plan is to release the EP in May, but have a full blown release party weekend in July in it's honour, but what could that entail? In a post on the Musicians Wanted Facebook group on Thursday, guitarist Jonathan Tiberi inquired about bands interested in playing a "3 day festival" in early July (my guess is over the July 7th weekend), and though he didn't go into great detail, he said to message him on Facebook if you're interested in participating. From what little I've heard, this sounds fairly ambitious, but hopefully this flies as well as the early word suggests, so stay tuned for any possible updates relating to the EP & it's release as it all comes in!

Finally, it's not just Facebook and YouTube that has seen their music pages see an upgrade in recent months, as another popular website for local bands has seen major upgrades. That site is Reverbnation, which launched a new layout and look in (I think) March which is mandatory for all users, including local bands and musicians on the site. It's designed to be more modern and easier to use, with easier to use administrative tools, an enhanced music player, and more integration with Facebook, though your band's control room looks essentially the same from what I can tell. Read more about the new look at this location! It's overall a very nice upgrade, though early on, I did have issues with song playback. Luckily, this doesn't destroy the look and feel of your band as much as the MySpace layout change did in 2010, so you shouldn't have to go back and edit too much of your pages. I recently added some new favourite bands and approved some old comments to the SMS Reverbnation page, so click here to check it out and get a sample of the new look of Reverbnation! Notably, another music site with local bands has also had a major facelift recently, but we'll have that in a future post, so stay tuned, and go make sure your band's Reverbnation pages flow well with the new look!

That's all for now, but stay tuned for an all-video post later tonight! Thanks everyone!
Posted by The Sault Metal Scene at 12:00 AM