Posted Around Preview, New Videos, And The Return Of State Of Misery?!

Hey guys, I wanted to first apologize for the delays in getting our YouTube Channel Profile up, but it completely slipped my mind while trying to get the Humane Society battle recap up and other related stuff, but I promise it's coming TONIGHT! Until then, here's a new news post featuring a preview of a cool art exhibition this week, a local band's possible return, and some new videos, so here's what you need to know!

Firstly for today, I wanted to preview an art exhibition that you guys should definitely be interested in attending! In cooperation with National Youth Arts Week next week, some of the organizers are hosting an art exhibition named "Posted Around" starting today and until Friday that will showcase local concert posters from the 1980s through last year! Metal concert posters are among those being displayed at the event (including the poster from the 11-band Sewer Swampstravaganja show at The Oddfellows Hall last year), and prints of said posters will be on sale for as little as $5, so if you like any or fondly remember a specific concert, you can own the poster for yourself! I'm not sure of how wide or large of a selection there'll be, but I bet it'll be a great exhibition with lots of memories and talents on display, both in the posters and the bands that played them! The event will be hosted at the Circle of Creative Arts building across from The Grand Theater on Queen Street East, with the grand opening taking place TONIGHT at 7:00 PM, though if you miss it, the exhibition runs until Friday. Admission is free and all ages (to my knowledge), but proceeds from sales of the prints will go to arts programming in Attawapiskat. For more details, visit the official Facebook event page!

I will 100% be there this week to check out "Posted Around", and I will definitely have photos and a recap for you guys this week as well! I wanted to make the grand opening, but my exam schedule doesn't gel well with it, so I hope to be there Tuesday evening, and I wanna buy at least one print to help the cause and support local art and music! I hope to see some of you guys there this week, and hopefully this jogs some memories of the scene as it once was, while introducing old school posters and bands to a new audience! Go check it out if you can, and stay tuned for my coverage of it!

Next up, remember last August when local death metal quintet State of Misery returned to activity after a three month breakup, only to quietly dissolve and delete their Facebook page by the end of last year? Well, it may be deja vu all over again, as recent postings on their Facebook group are hinting that State of Misery may have reunited for a second time. Nothing officially indicating a reunion has been announced, but drummer Nick Kainula posted a status there yesterday that says "big news regarding May 4th!", followed by posting a link a live video from a January 2011 concert. I'm not sure what the allusion to May 4th would indicate, but for reference sake, May 4th is one week from Friday. If they're reuniting, I'm not sure what their lineup will look like (given Steve Rhodes & Ray Cowan's current work in The Valentine's Day Massacre & Social Suicide), but the fact that Facebook is hyping up a date in May must mean something. If I hear anything positive or negative towards a potential State of Misery return, I'll have it here, but keep posted for updates, as their hard hitting death metal originals would surely be welcomed back to the stage if this is indeed another band reunion!

We'll close today's post with some new videos, starting with a new solo performance video from Bear Hunters bassist (and "Best Bassist" winner at the Sault Humane Society Battle of the Bands) Justin Lam! The first solo video he's uploaded to his YouTube channel of him on bass in almost four years, it's a cover of Trivium's "A Grey So Dark", and I like that he plays in the video like he does on stage in terms of presence! He seems to know the song very well, and compared to some other musicians, he doesn't have the backing track at an overpowering volume level. Solid work as expected, so check out Justin's new Trivium cover below, and fingers crossed it isn't another four years before he posts a new bass cover! 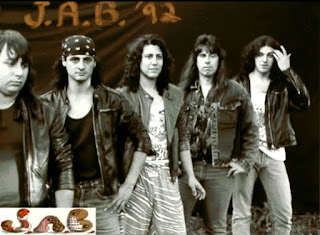 Finally, here's another archive audio upload from Flat Stanley/Wishbone drummer Glen Thomas' YouTube channel! Posted last week, this is of one of Glen's early 1990s hard rock bands named J.A.B. (short for "Just Another Band") covering "Rock Candy" by Montrose at an unknown local bar (it was in the Jamestown area), and while this is newly posted, it's one of three J.A.B. videos that Glen has put on YouTube. He originally uploaded tracks of J.A.B. playing an untitled original and a song named "Solar Angel" onto YouTube in November 2009, and all 5 feature Glen on drums alongside vocalist Gigi Micelli, guitarists Gerald McKinnon & Jean Paul, and bassist Dan Jones. The three songs are pretty interesting, and they sound like they had talent way back when! Gigi's singing has that retro melodic feel that flows with the material, Glen's drumming is as great as ever, and the band seems to have good chemistry! I like when Glen posts old audio recordings from his bands, they're a nice glimpse back at the local scene's past, and I can see myself rocking out to J.A.B. 20 years ago if I was of age to!

Check out the songs above, and their Montrose cover below, but note that the audio fades in and out here and there on these recordings. Also, click here for an interesting story relating to what happened after the concert that the song below came from!

That's all for now, but stay tuned for more news and notes very soon, including our overdue next YouTube Channel Profile! Thanks everyone!
Posted by The Sault Metal Scene at 2:23 AM