Let's get another news post up at the SMS, so here's what's on tap for this Wednesday! We've got a great new Sault Star article with local connections, a band's likely descent into inactivity, details on a relaunched local site with metal aspects, and an acknowledgement of recent Facebook changes, so here's what you need to know!

A new article on late Woods of Ypres frontman David Gold has made The Sault Star! Entitled "Solid Gold" and written by Jeffery Ougler, I presume it's in yesterday's paper, but you can click here for the online version. The article largely features comments from David's mom Esther Gold, though Dismembertainment's Rich Moreland (who's promoting Saturday night's Ypres Metal Fest) is also briefly interviewed. In the article, Esther talks about the time between David's last text to her and when she heard about his passing, how the family is adjusting, her efforts to keep the Woods of Ypres name alive, opening her home to bands to stay at for concerts David was connected with, his songwriting ability, and much more, so definitely give the article a read for some nice and heartfelt comments! I still feel really bad for her, and I can't imagine how hard it would be to lose a child right before Christmas, it just seems unfair. Jeffery also gives deserved plugs to the planned "A Heart of Gold" Woods of Ypres tribute CD (though it's title & complete track listing aren't given) and both David Gold memorial concerts (specifically the Ypres Metal Fest this weekend at The Canadian), which is awesome to see, as every bit of press helps!

It's also briefly noted that Bossy's Pub N' Grub (seconds from The Canadian) now has tickets for the Ypres Metal Fest, which has not been mentioned elsewhere in terms of ticket locations, but keep that in mind! This is a great article, and though they credit Toronto as Woods of Ypres' home base despite having formally relocated here in 2008, it's well researched, very long, and gives some awesome press to all the David Gold tributes on the horizon! Check it all out at the above links (or read yesterday's paper), and stay tuned for more on all of the above topics soon! 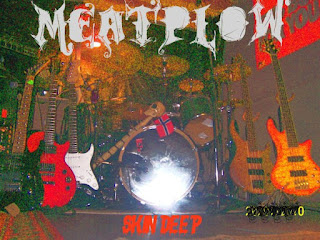 Next up, I wanted to note a band that we're now considering to be inactive on the SMS, that being the Sault Ontario metal band once known as Meatplow. While we're not past the year's inactivity threshold that we count on the SMS, their Facebook page was deleted within the last few months, and with no real band updates for many months as it is, I'm comfortable in saying that they've probably went inactive. As such, I've replaced their link on here with their Facebook group, and they're now in our inactive Sault Ontario band links. Meatplow were a newer project from former Amethyst drummer Phil Temperao and assorted other members that had been active off and on from roughly 2009-2011, and though a name change and recorded material were hinted at in early 2011 videos on Phil's YouTube channel, nothing was ever publically announced to expand on said news. Info on Meatplow was always lacking, but their videos shown a lot of promise, especially on their industrial-tinged earlier videos, and Phil impressed me with his singing and drumming, so hopefully he, Dennis, and Mike will reactivate the project down the road, or at least stay in music. Check out more from the band once known as Meatplow at the above links!

Thirdly, the 705 Video Magazine is finally back online, and if you've missed the old Sault Music Scene website, then you'll like this! In it's last forms, the 705VM was just a general forum with a connected Facebook page, but now, they have a full website again, and along with sections on local extreme sports and general news/reviews, it has a full music section with profiles & reviews on bands local and non-local alike, just like The Sault Music Scene used to have! Profiles on the Ypres Metal Fest, Frightlight, The Harsh Heads, As It Stands, and Destroilet are featured, among many others, so click the above links to check them out! Note that they mostly featured very basic bio information and don't appear to be newly written with analysis of the bands, but maybe with time. There's even some interviews with a metal relevance, though none are with a local band. A store is also coming soon, and despite the focus back on an old Sault Music Scene-esque style, the 705VM forum is back too! It's newly relaunched with a new layout, format, and sub-boards, so you'll need to re-register, but at least it's not locked to non-members like some of their older forums were! That said, the old metal-centric board from there is gone, but there's still music-centered ones to talk bands and shows with!

With the changes, I've edited the link in our local metal message boards section to reflect the new forum URL, and because it's now separate from the 705VM website itself, I've added that to our "Other Local Metal Links". It's great to see the 705 Video Magazine go back to the future for their new look and focus beyond Facebook, and I hope this takes off like the original Sault Music Scene did! Same for the forum, as it's seen so many looks, names, and states lately, and I hope this current form lasts for the long term. Check it all out, and stay tuned for more local metal plugs from the 705VM as they come in!

And finally, just a note on something I'm sure that all of you guys are more than aware of by now, but most (if not all) Facebook pages have been upgraded to the new "Timeline" format, presumably to achieve consistency with the Timeline profiles that Facebook has been rolling out to personal Facebook accounts. Yes, this is mandatory, just like the MySpace & YouTube profile changes. As such, the timeline features a new two-column layout with a large cover photo, new placements for subsections and mentions/postings, and there's an emphasis on creating a timeline for whatever your page is for, so while it's not easy to see every single thing you've ever posted, you can go back & add things (like a discography or important events) if you so chose, which would help to connect the dots and accentuate your history and happenings. Nothing's being directly deleted from your pages with the change, but you may want to edit them to re-accentuate or promote certain aspects of it. I don't find that the Timeline profile is perfect, but it's not terrible, and I've tried to make the SMS' Facebook page look nice with the new format, including a cover photo of our logo with numerous local band members inside it. It's an adjustment, but hopefully you guys can take on your band pages and make them look great!

That's all for today, but stay tuned for news, concert previews, and feature posts shortly! Thanks everyone!
Posted by The Sault Metal Scene at 4:44 PM