Anyone wanna see some new videos? I've got a bunch today for another local metal video showcase, so here's what's on tap! Tonight, we've got this week's classic video, new original videos from a pair of local guitarists, and some early 1990s audio recordings from an old local band, and for fairness, I've organized these videos in alphabetical order by band name. Check it all out below, and also see our last news post featuring new concerts, a local band's breakup, and more in the post below this one!

Let's start with the newest video from ApocalyptiCDistroyeR frontman Jesse Middaugh, who uploaded this onto his YouTube channel earlier today. The first new video on his channel in almost a month, this is an over 6 minute long "jam session" video, though he's the only band member present. Jesse's playing on a new guitar here, and the original riffing and melodies he presents here sound pretty good, but hopefully he fleshes out some elements of this session into fuller original tracks, and maybe with the whole band? Check out Jesse's newest video below, and check out much more at the above links! 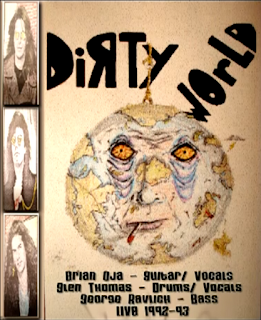 Next up is a series of new audio uploads onto Flat Stanley/Wishbone drummer Glen Thomas' YouTube channel, all from an early 1990s hard rock band of his named Dirty World! He was joined by longtime bandmates & Bigsuit alums Brian Oja on guitar & Crank Sound Distribution's George Ravlich on bass for most of the tracks, with The Southern Fried Band's Paul Dellavedova and veteran local musician Dale Corcoran on vocals & guitar instead of Brian in an earlier upload. Four audio recordings from 1992 were posted onto YouTube by Glen earlier today, including a cover of Creedence Clearwater Revival's "All Around The Bend" at The Royal Hotel with their earlier quartet lineup, covers of the Pat Travers songs "Go All Night" and "Snortin' Whiskey" at The Eastgate Hotel, and (as embedded below) a jam session cover of Joe Satriani's "Ice 9", so check everything out above and below! The recording quality is pretty good, and though the CCR cover is well performed & sung, the band had clear talent at instrumental hard rock numbers, and it's nice to see a band (even a defunct one) take that approach with their music! Check out all of the new uploads from Dirty World's heyday (and much more from Glen's past & present projects) at the above links, and here's their Joe Satriani cover from 20 years ago!

Thirdly today is a new original track & video from local solo guitarist Mike Cliffe! Entitled "Three Riff Monty", he uploaded this on his YouTube channel on Saturday. The title comes from both the card game Three Card Monte and the fact that he uses 3 different riffs in the song, and though he calls it "overdriven", it sounded pretty good! Nice jazz-influenced hard rock instrumental with some interesting visualizations (including dancing stick men), and it's worth a listen if you like Mike's heavier solo work! Check it out below, and hear much more from him at the above links! 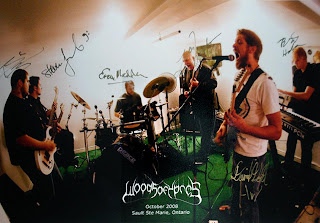 And finally, here's this week's classic video, and with the Ypres Metal Fest debuting at The Canadian Nightclub on Saturday in memory of late Woods of Ypres frontman David Gold, I thought it'd be more than fitting to upload a new live Woods of Ypres video to YouTube that wasn't there before! David had plenty of band videos on his personal Facebook page from concerts following the band's local relocation in 2008, and for this classic video upload, I chose this video of Woods of Ypres playing "Awaiting The Inevitable" from a concert in Sudbury on November 18th, 2008! This was from the band's "Looming Cold of Autumn Tour" that fall, which was their only tour featuring their short-lived "Gates of Ypres" lineup, featuring Gates of Winter's longtime 4 core members, then-drummer David Gold on vocals & guitar, and Evan Madden behind the Woods drumkit. I chose a video from 2008 over others available due to the lineup's very strong local connections, and I picked "Awaiting The Inevitable" over other 2008 videos because of it's rarer frequency at Woods of Ypres concerts. This video has strong audio quality, and the filmer had a good angle of the band, but the lighting is fairly poor, and the band members look almost in silhouette on stage.

This video was filmed live at the concert by an attendee ans was later uploaded by David to Facebook at http://facebook.com/video/video.php?v=42134820671. NO COPYRIGHT INFRINGEMENT IS INTENDED!!! All credit for this video goes to Woods of Ypres and the original filmer, I'm just trying to share this performance with a wider audience like it deserves! David's musical work deserves recognition, and some solid older videos can always help, so give this 3½ year old Woods of Ypres video a look below, and stay tuned for much more coverage and previews of the Ypres Metal Fest as the week rolls along!

That's all for today, but stay tuned for a new news post soon, which WILL include the David Gold-related article from The Sault Star, I promise! Thanks everyone!
Posted by The Sault Metal Scene at 10:30 PM

Thanks for the plug Rob and the interest in Dirty World music. Both generations of that band were a lot of fun to be a part of. Keep up the great work on your blog.;-) Glen "the freq".

Hey, it's no problem at all! Keep up the great work, and hopefully there's some more stuff from the archives to share!