In the first of a special two-post spotlight, we're looking at the audio uploads made on Friday the 13th in a blitz of new material by Eckerman, Michigan label/recording studio Werehold Records! Well hyped in advance, the label ran by Life's Eclipse/Swampghas guitarist Jason Mills has always had a solid roster of bands and musicians from the Upper Peninsula of Michigan, and though they've generally not been frequent sights at local concerts, the Werehold roster has always had a lot of talent to speak of! On Friday, the label posted no less than nine new audio recordings from Werehold artists onto their YouTube channel, and from what I understand, there are hopes to repeat this spree of song postings on future Friday the 13ths (the next one is in July.) From what I was told, the Paradise, Michigan thrash project Drayton Fever was slated to have a song be a part of the Friday uploads, but it wasn't finished in time, which is disappointing. Still, there are 9 songs to check out, and almost all are of a metal or hard rock variance! Though some are out of our "local" range, there's a lot of local talent among the artists on this talented local label, so here's what you should know for the first chunk of Friday's uploads! 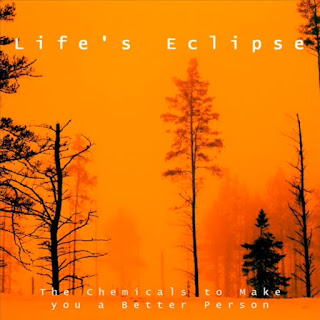 Let's start with two new uploads from Eckerman, Michigan metal quartet Life's Eclipse, whose songs were featured in two of the nine song uploads on Friday! The two songs are entitled "Prom Queen On Crutches" and "Electrography", both of which are likely to be part of the album "The Chemicals To Make You A Better Person", judging by the used picture on both videos. Both tracks are instrumentals, which isn't reflective of the songs' final quality, but Jason told me that the vocal tracks that were done for these songs didn't turn out well, so they were posted as is for the Friday the 13th Werehold uploads. Still, these are well recorded and have a nice metal sound going for them! If anything, the two songs sound very similar, but "Prom Queen On Crutches" has a catchier groove that's easier to headbang along with. There's some repetition late, but adding vocals would likely help for both tracks. Check the above links to hear both of these promising Life's Eclipse demos, and here's "Prom Queen On Crutches"!

Also among the new uploads are a couple of Upper Peninsula acts' newest songs, and though I don't know a whole lot on either, they're worth mentioning for sure! One is a new song entitled "Whispers Removed" by the Isle Royale metal act known as The 1,000,000,000s Who Died, and like the Life's Eclipse songs, it's an instrumental demo. I know very little on this band & their members, but Werehold Records' MySpace page describes them as what it'd sound like "if Terminators decided to play music". Interesting sound on "Whispers Removed", with a technical metal sound with some solid driving riffs, though the song has a very low tone. Hopefully we hear more from them soon! Another new track from Friday the 13th was "Still Standing" by the Brimley electronic/breakcore project named Palaver, and though it's the only real "non-metal" song of the nine new Werehold uploads, it sounds pretty good for it's style! Like with The 1,000,000,000s Who Died, I know extremely little about Palaver, but for electronic music, it's definitely edgier and not as repetitive as some other songs of similar genres that I could mention! Check the above links for more on both of the above bands and their material!

Finally for our first half of the Werehold Records Friday the 13th uploads, here's a new song from a band known as East Branch! I don't know a whole lot about them, except that they were once known as Jaar, they appear to be from Strongs, Michigan, and I believe that one of their members is J.R. Johnson from Swampghas (please correct me if I'm wrong.) That said, while I may not know their full lineup or band history, their new song from Friday (entitled "Black Market Body Parts") is a solid instrumental metal track! The song sounds a bit reserved in it's production, but it's slow deliberate pacing help give it a cool vibe, with some nice heavy riffing thrown in. so check out this new original from East Branch below, and I wonder if an online page will turn up?

That's all for now, but our look at the Werehold Records uploads from Friday will continue tomorrow with a look at the remaining four songs, including appearances by bands featuring Life's Eclipse and Great Bodily Harm alumni! Stay tuned for that tomorrow, along with more news shortly! Thanks everyone!
Posted by The Sault Metal Scene at 10:00 AM