It's time for some of this weekend's concert previews, and due to the scope of some, I'm segmenting them into two separate posts: One for concerts tomorrow, and one for concerts on Saturday. I don't wanna do the usual twin Saults division this time because I fear that if I covered the MDD/Cavo concert and the Ypres Metal Fest in the same post, one or both would be overshadowed, so we'll cut these chronologically, with the Ypres Metal Fest preview (which will be longer than usual) and the Tym Morrison solo show preview coming tomorrow. So today, we've got two concert previews, and news on TONIGHT'S first of two official David Gold memorial concerts, so here's what you need to know! Let's start with the concert previews, and after over a year away from booking major concerts at Kewadin Casino, Allstar Promotions are back in the mix with a high profile lineup of major rock bands at The Dreammaker's Theater TOMORROW NIGHT! Now, this show is being headlined by Norwood, Ontario rock notables My Darkest Days, who were originally slated to open for Buckcherry & Papa Roach last March before frontman Matt Walst fell ill, so if you missed them last year, make note of their local debut this time around! Best known for hits like "Porn Star Dancing" and "Casual Sex", they don't quite cross the hard rock line, but they have lots of local fans, and they should entertain tomorrow night! Joining them tomorrow night are St. Louis hard rockers Cavo, best known for hit songs like "Champagne" and "Crash", and they'll be sure to impress at Kewadin Casino tomorrow night themselves! Opening up this show will be Vancouver post-grunge outfit The Veer Union, who are slowly making waves on the North American rock charts with singles like "Seasons" and "Youth Of Yesterday", and they should deliver a solid opening set at tomorrow's concert! Notably, all three bands have new albums coming out this spring, so expect lots of new material as the night rolls along as well!

Tickets are still available from the 10th row and back for this show, and they cost just $22.50, which is nice and affordable for this package of bands! You can pick them up still online at this location, at the Kewadin box office, and over the phone at 1-800-KEWADIN. I'd recommend calling ahead too to see if there's a meet & greet with the bands, as Dreammaker's Theater concerts often have one. This is definitely an all ages event, and it all starts at 7:00 PM tomorrow, so check the above links for more details! This should be an entertaining concert, especially if you've been craving newer bands at Kewadin during Allstar Promotions' hiatus from booking shows there, so hopefully a good crowd turns out! I personally am not a huge fan of My Darkest Days, and I find that "Champagne' is badly overplayed, but Cavo and The Veer Union have some nice hard rocking tracks, and all should go swimmingly tomorrow night all around! We'll of course have fallout on this show as it comes in, but for now, here's the music video for Cavo's new single "Thick As Thieves", and don't miss this show tomorrow night!

The other concert with a hard rock sound coming up tomorrow night is the debut of the current version of Turner Up at The Rockstar Bar! Though the pre-Full Circle version of Turner Up were a frequent sight at the bar upstairs from The Algonquin Hotel, this will be their first show at The Rockstar Bar since the band's relaunch, and with their more scattered live concert schedule, it could be a while before they're rocking The Rockstar Bar again, so don't miss out! Turner Up will bring their classic hard rock covers there tomorrow night at 10:30 PM for one night only, as Boogie Fever are booked there on Saturday night, and unlike many past weekends, Turner Up don't have a Saturday show booked elsewhere at present. Admission should be under $5, and you must be 19 to attend. For more details, visit the official Facebook event page! Sounds like a fun concert, as Turner Up always have, so don't miss their hard rocking covers tomorrow night! For a preview, here's the old Turner Up covering Guns N' Roses' "Mr. Brownstone", and don't miss Turner Up at the Sault Humane Society Battle of the Bands on April 20th! 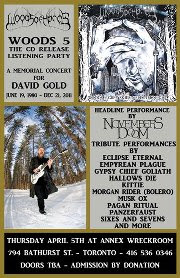 And finally for today, while it's not a local concert, I wanted to give it a deserved profiling due to it's local connections, as tonight marks the first of two official David Gold memorial concerts. Entitled "A Memorial Concert For David Gold", this also doubles as the official release party for Woods of Ypres' final recorded album "Woods V: Grey Skies & Electric Light", and it's being held in Toronto at The Annex Wreck Room, a venue that David has played at with both Woods of Ypres & Gates of Winter in the past. The show will feature a listening of the entire album, along with a silent auction and band merchandise sales (including a special edition of "W5" with a limited edition guitar pick & bottle opener), with proceeds going towards David's final expenses and the David Gold Music Scholarship at Sault Ontario colleges. Though the lineup and band order isn't finalized, the listed bands currently include Chicago doom metal mainstays Novembers Doom as headliners, along with fellow Ypres Metal Fest participants Kittie, Hallows Die, Empyrean Plague, and Gypsy Chief Goliath, Southern Ontario metal outfits Eclipse Eternal, Pagan Ritual, Panzerfaust, Sixes & Sevens, and "Woods IV" guests Musk Ox, along with Bolero frontman Morgan Rider. There could be more bands than just them, including surprise acts, but we might not hear more until after the show as to what exactly went down.

Admission is by donation, an 8:00 PM start time is listed, and unlike the local tribute show on Saturday, it is a 19+ event. For more details, visit the official Facebook event page! I know there's at least a few local metalheads going to this show tonight, and even if David didn't want to be remembered like this in death, there's few more deserving given his talent and accomplishments, so hopefully this is a huge success! The only thing missing to me is more ex-Woods of Ypres members, as I think it'd be really interesting to see numerous former band members join forces to play a tribute set. Imagine (for example) guest singers joining Joel Violette, Bryan Belleau, Aaron Palmer, Evan Madden, and Jessica Rose for a show in David's memory... I'd like to see it, at least! No matter what though, I wish everyone the best for this tribute show, as David deserves the accolades and tributes for all he's done! Hopefully some of you guys can make it down, and stay tuned for much more news (including the Ypres Metal Fest preview) very soon! Thanks everyone, and R.I.P. David!
Posted by The Sault Metal Scene at 2:29 PM