The Sault Humane Society Battle Of The Bands Preview!! 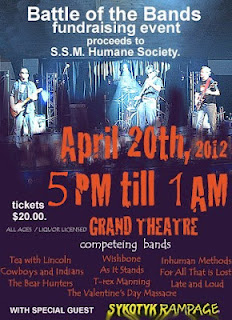 Today's second concert preview post is completely dedicated to a major local concert event, as after almost two years, a battle of the bands is hitting Sault Ontario TOMORROW NIGHT! The Sault Ste. Marie Humane Society are hosting this 10-band battle at The Grand Theater as a fundraiser, with all proceeds from the event going to the Humane Society, which is a great cause, as who doesn't love animals? This is the first battle of the bands to my knowledge in Sault Ontario since Downtown Showdown at The Oddfellows Hall in May 2010, the first to be held at The Grand Theater since the YMCA battle in March 2009, and the largest of it's kind since the 20-band Kiss battle of the bands in late 2009, so this is both a big event and a long time coming! Before we get into the wide array of bands, here's what I know and can tell you about what to expect tomorrow night. Tickets are $20, but considering that you're seeing 10 competing bands and one bonus opening band, you're paying less than $2 a band, and that's quite a good investment! Tickets are available in advance at the Humane Society on Second Line East, Northland Music, The Rad Zone, Music Depot, and at The Grand itself, which will also have tickets at the door. Doors open at 4:30 PM tomorrow afternoon with a 5:00 PM start time for the opening band, and yes, this is an ALL AGES event! However, it will be liquor licensed too, so if you have ID, you can get your drink on tomorrow night! 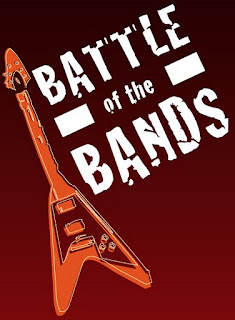 The battle's rules itself are fairly straightforward from what I can tell, but I can confirm one new addition: Judges! Originally planned to have an audience vote to determine winners, there will be an (at-least) three man judging panel tomorrow, so if you wanna win, bring your A-games, not tons of friends! Each of the 10 bands will have 15 minute sets to rock out and show their stuff, but going over 15 minutes will apparently result in disqualification. Bands have 10 minutes to set up and 5 minutes to tear down instruments, and delays in either could result in judging penalties. Bands will be scored on numerous categories relating to talent, stage presence, and so forth, and the performance order is being randomly drawn at the Grand Theater tomorrow before the battle. Cover songs are not off limits, but originality during sets is part of the judging criteria. After the bands wrap up, winners and prizes will be awarded, though I have not personally heard what the grand prize is or if anything will go to higher placing acts. Now, let's preview each of the bands playing tomorrow night (6 of which are metal), with most of them making their Grand Theater and local battle debuts, so what should you look out for? Out of fairness, the bands are listed in alphabetical order, so here's who's competing tomorrow night!

As It Stands: This prominent local hardcore quintet will be sure to deliver a high tempo set of their explosive originals tomorrow night, in their first appearance at The Grand Theater since (I think) 2008! Always attracting a big crowd and high profile notices, will they score as big with the judges as they do with their wide local fanbase?

The Bear Hunters: Quickly rising in the local metal ranks, this frequently seen melodic death metal quintet will be sure to deliver some brutal originals in their quest to win the Humane Society battle! Note that guitarist Josh Stephney has won no less than three local battles while fronting Bring The Fallen in 2009 & 2010, but can he make it four tomorrow?

Cowboys & Indians: A late addition to the battle lineup, this talented alternative/indie rock trio is stacked with local talent, including The Crossed's Jordan Flesher & Soldiers of Misfortune's Alex White, both of whom won major local battles of the bands in the mid-2000s with their old bands. Will their softer, yet very proficient brand of music rise to the top this time around?

For All That Is Lost: One of two bands from Desbarats competing in this battle, For All That Is Lost have made noticeable local waves since their local debut last year, and their notoriety is spreading well, but will the men in the white masks have what it takes to claim top honours with their quickly improving death metal assault?

Inhuman Methods: Though arguably the least familiar of the competing bands, this newer Desbarats death metal quartet did attract some notice with their debut performance at the Dead In The Van concert at The Canadian last month. Can they build on their first gig and deliver a strong set of brutal death metal come tomorrow night?

Late & Loud: Since their late 2010 debut, Late & Loud have brought classic styled metal to many local concerts with lots of talent & swagger to spare, but will their old school sounds rise to the top of the ranks tomorrow? Also, can members Benn Garside & Josh Hatherley build on their 3rd place finish at 2009's YMCA Battle with The Glass Statues?

T-Rex Manning: This newer local punk band has not been a frequent sight at local concerts since their November debut, but with Frightlight's J.D. Pearce up front, they shouldn't be taken lightly! Will their entertaining punk onslaught captivate the audience tomorrow night? Though T. Rex Manning don't have an online page yet, check out two live videos at this location.

Tea With Lincoln: The smallest and softest band tomorrow night by lineup & genre, this acoustic folk duo led by Brendan Simard & Deven Creagh have became a frequent and talented local sight with their well performed brand of indie rock, and their talents speak for themselves at live concerts, but can they claim first place at tomorrow's battle?

Wishbone: The only band competing tomorrow with a recent local battle on their resume, the 2009 Kiss battle finalists will bring a well respected rock sound with a progressive flair to the Grand Theater tomorrow night, but will Dennis, Glen, and company's prolific and easily listenable sound claim the top prize at this battle?

Check out all of the above links to read more and hear material from each band! Note that three previously confirmed bands have dropped out of the battle, those being new local blues rock quartet The Moves, classic hard rock standouts Turner Up, and funk rock trio The Vertically Impaired. I haven't heard why the latter two bands dropped out, but The Moves did so due to external commitments. Disappointing, but we'll see them all around soon (in Turner Up's case, this Saturday night), and 4/5ths of Turner Up at least saw battle success last weekend when Havadder placed at the Rock N' Roar Festival battle in Spanish to open for Lou Gramm this summer!

And finally, there will be an opening band for tomorrow's battle, as local blue Chinese metal crash punk quartet Sykotyk Rampage will play their first concert set in four months when they open the festivities at 5:00 PM tomorrow evening! Though they're battle veterans in their own right (notably finishing third at the Sault College/Scotties Tournament of Hearts battle in February 2010), they're not competing against the other bands, and will perform out of competition. Sort of similar to the YMCA battle from 2009 at The Grand Theater in a sense, though that opened with a YMCA Rocks play. Sykotyk Rampage's unique blend of alternative hard rock, punk, and blues have propelled them to over two dozen albums and some good local notoriety, and it'll be good to see them back at it tomorrow to lead things off before the battling begins! I will absolutely see you guys there for the entire battle tomorrow night, and may the best band win! It's been far too long for a local battle, so let's make this a huge success so that more occur in Sault Ontario in the near future! For a preview, here's Sykotyk Rampage playing their signature song "Drinking On The Weekend" at their last competitive battle appearance in 2010!

That's all for today, but if there's no news post tomorrow, I will 100% see you guys at the battle tomorrow before $5, so get your tickets, this should be a fun night! Thanks everyone!
Posted by The Sault Metal Scene at 4:00 PM