LOCAL CONCERT ALERT (As It Stands), Hoist The Sails Updates, And New Videos

In what may be the last news post of the month (I stress "may"), we've got some notable news and notes to share with you guys today! We have new videos from a pair of local hard rock artists, the latest news from a rising Sault Michigan metal band, and a LOCAL CONCERT ALERT for later this week, so here's what you need to know! 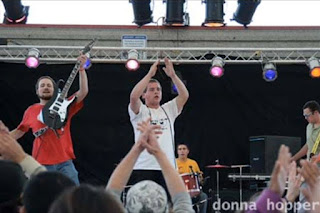 How'd you guys like an outdoor metal show in Sault Ontario for a change? Bear Hunters/Borderline Divine guitarist Mitch Sirie is promoting a metal show at the Roberta Bondar Pavilion THIS FRIDAY in cooperation with The Arts Council of Sault Ste. Marie and National Youth Arts Week, and though complete details aren't announced yet, the band lineup is now public! This show is slated to be headlined by local hardcore quintet As It Stands, with a local death metal three-for-all opening the festivities, including the aforementioned Bear Hunters, crust/grime standouts Shit Liver, and deathcore quartet The Valentine's Day Massacre, which adds to a solid lineup of local metal talent! This will mark most of the bands' first local concert sets since the Humane Society Battle of the Bands last weekend, but it will be Shit Liver's first show since the Ypres Metal Fest on April 7th. Plus, this is most bands' Roberta Bondar Pavilion debut (As It Stands aside), and it'll definitely be interesting to see metal rock the tent downtown for a change! Full details will be announced tomorrow when everything is finalized, but a 4:00 PM start time is tentatively being aimed for, and I can't see this not being all ages. For more details, visit the official Facebook event page!

Mitch has been outdoing himself in recent days trying to bring local metal bands to more public and open areas (including his Rotaryfest campaign), and with hopes to make this just the first of many outdoor metal shows in the area, fingers crossed that this Friday concert event is a huge hit! Stay tuned for more official updates as they roll in, and also click here for more news and events for National Youth Arts Week this week!

Next up, here's the newest updates from newer Sault Michigan metal band Hoist The Sails, and first, it appears they have quietly parted ways with bassist Joe Niemi. A reason for his departure has not been announced, but he was removed from their lineup on their Facebook page at some point within the last two months. Disappointing, but Joe has talent, and hopefully he joins a new band soon! From what I can tell, he has yet to be replaced, but I'll let you guys know if anything is announced on that front. Aside from that, recent news has been sparse, but a new video has been uploaded onto Facebook indicating that they're still alive. Uploaded by singer Lucas Falkowski, it features guitarist Mitch Goetz showing us the band's recording area, where the other band members were at the time of filming, and a 22 second sample of a new original song is also previewed near the end of the 83 second long video. Click here to check it out! Hoist The Sails still sound like a very talented and promising new band, but hopefully updates pick up more than they have been in recent months, cause they definitely are off to a solid start! Check the above links for more, and stay tuned for more updates on Hoist the Sails' new material and bassist situation!

We'll close this post with new videos, starting with the latest song and music video from local electronic hard rock project Candle Hour! Well, this is more specifically credited to "Hugh Stephens, otherwise known as Candle Hour", but it's for sale and posted on Candle Hour's online pages, so I'll still count it as a band track. Continuing with the more downbeat tone from Hugh's last song "Azetta", this new recording (entitled "Missing Moment") is inspired by the idea that we've all lost moments in our lives that we wish we could relive. The song itself is an ambient orchestral instrumental with some piano accompaniment, and while it's not as heavy as some of Candle Hour's other songs, it is well performed! You can officially buy it at this location, but Hugh also uploaded it with a video of slowed down fireworks in reverse onto the band's YouTube channel on Friday, and the visuals add to the mood! Also note that before he posted this video, he deleted his most popular video from his channel, which was for Candle Hour's original song "March to the End". I don't know why he deleted it, but it's disappointing, especially as it was my favourite of his YouTube uploads for music quality! You can still see the video on other websites, but for now, check out "Missing Moment" below!

And finally, here's the latest solo video from ApocalyptiCDistroyeR frontman Jesse Middaugh! It's a "rough thought" towards a new original song that he's planning to use in his "new project". Details on that weren't elaborated on, but judging by the repeated use of the ApocalyptiCDistroyeR name in the video tags, it might just be a new version of that band. Uploaded to the band's YouTube channel on Thursday, it's reportedly planned to be a soft & catchy original, and he's going to make the final version less repetitive than in the video. It sounds alright, but you can tell it needs more variance and leads. Check Jesse's new video out below, and maybe he'll post some new heavier material sooner or later too!

That's all for today, but stay tuned for our review of End of Existence's debut album by TOMORROW! Thanks everyone!
Posted by The Sault Metal Scene at 2:36 PM