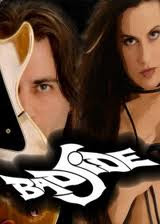 Members: (Members not in their last lineup in italics. If there are any errors or omissions to the band's lineup, let me know!)

Audio/Video: With three full length CDs recorded, it's good to know they're all still available online! All three Bad Side albums are on sale at CD Baby & iTunes, or via PayPal at info@badsiderocks.com! Each goes for around $9.99 in mp3 format, though CD Baby does have limited quantities of the first 2 albums on actual CDs, which are otherwise out of print. Locally, I know Grooves Music has sold their albums in the past, so it's worth a look there too in case some Bad Side CDs are in stock! Broken up or not, they deserve support for their talents and hard work, so I recommend buying their albums in some form! Their albums are floating around online in free downloads of differing types, but if you want to stream, I recommend their independent label Vicious Music's YouTube channel, which features dozens of videos ranging from songs & interviews to live & music videos! Others are out there, but that's the best source, bar none. Here's Bad Side's music video for their song "Hit Me"!

Info/Analysis: Bad Side were formed in June 2003 by members of an area cover band named Vicious Circle. The band's main members were singer Melissa Krahnke & guitarist Jason Mapes, who were also well known locally as radio DJs; Melissa with 99.5 Yes FM & Jason with Yes FM & 97.9 The Bear. The desire to write original material led to their self titled debut album, released in 2005, which was followed by "Bad Side II" in 2007 and "Bad Things Come In Threes" in 2008. The latter albums were mixed by noted producer Beau Hill, who's worked with acts like Ratt and Alice Cooper in the past! During their run, they found their way onto an area compilation disc through Northern Michigan radio station KLT in 2005, and played many major shows in Michigan & surrounding areas. Some highlights included opening for Loverboy at Kewadin in 2008 & opening for Blue Oyster Cult at that year's Bell Border Jam festival in Sault Ontario, along with many stops at The Rapids Lounge. After going on a sudden hiatus in late 2009, the band dissolved in mid-2010, coincidentally following Melissa & Jason's release from their radio contracts during the major local radio buyout. Their last shows were in August 2010 in the Milwaukee area, culminating with a set at Milwaukee's annual Summerfest. Melissa has since moved to Pennsylvania, where she works at the radio station 98.5 KRZ, while Jason is working on a solo project based out of Nashville with other former Bad Side members.

Bad Side were always one of the more prominent bands in the local scene, and they had the talent to back it up! Melissa's bluesy soulful vocals & Jason's hard charging riffs & melodies complimented each other really well, and their live and studio collaborators were always well suited to their material! Though it could be uneven in quality, their mix of classic rock and current heavier attitudes kept them relevant & atop the local scene in the mid-late 2000s! Their breakup (and radio firings) last year were sure disappointing, but fingers crossed that they reunite down the road! Their brand of old school hard rock wasn't to be missed, and they played it the way they wanted with no regrets, as it should be! Check out their CDs & posted live material at the above links!
----------------------------------------------------------------------------------
There, I hope you guys enjoyed this month's Defunct Profile! We return to Sault Ontario next month for the rest of the summer (in all likelihood), but who are we profiling next month? Through completely random selection, I have chosen defunct local hardcore quintet Out Of The Mouth Of Babes, best known as the band that 4/5ths of As It Stands were members of during their 2009-2010 breakup! It's odd that they got picked during As It Stands recent hot streak, but hey, I can't fault a random selection! That's all for now, but stay tuned for more from the SMS very soon! Thanks everyone!
Posted by The Sault Metal Scene at 12:00 AM