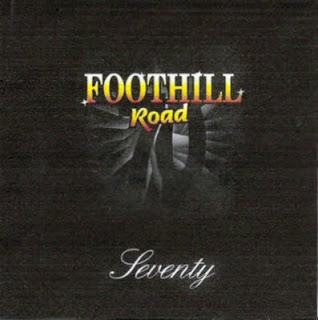 Hey everyone, it's time once again for our 24th monthly CD review at The Sault Metal Scene! Because no brand new metal albums came out in the past month, and with the guitarist of this band rocking The Vibe Lounge earlier in the month with his current band, I've decided to finally take a look at "Seventy", the debut EP from defunct local hard rockers Foothill Road! Released circa 1994, it was recorded at Satellite Sound Studios with producer Bob McLeod. The album features Foothill Road's original lineup, including former Spy Vs. Spy frontman Ken Luxton, ex-Sneaky Pete guitarist Mario Carlucci, bassist Ron Pyette (now a scout for the NHL's Pittsburgh Penguins), and drummer Rick Bain. Though the album is long since out of print, you can probably score at least the mp3s to this (and other) Foothill Road albums by contacting Mario directly at this location (he's how I got my copies!) For convenience sake, I have also uploaded the whole album to the Sault Metal Scene's YouTube channel so you can stream it there too! Just search for "Seventy" in the search field. The song titles below are hyperlinked to my uploads of the tracks for convenience too. With six tracks at around 24 minutes in total of music, let's start with the first track, "Centerpiece"! (Updated on September 28th, 2012)

"Centerpiece" starts off the EP with a good guitar riff and some light drumming before we hear some very Billy Corgan-esque vocals from Ken Luxton, which pick up in energy and harshness in the chorus. The song has a nice groove to it but it sounds empty, like it needs a second guitarist (which was remedied in the self-titled follow-up EP.) The song does also get a bit repetitive with reserved verses and more energetic choruses, but it's a catchy little song, especially from Ken's vocals! Rick Bain's drumming seems a bit too cymbal heavy, and the bass isn't terribly audible either, but it has a catchy quality going for it. Mario's guitar work is good too! Solid opener with a lighter groove, but it still rocks regardless! "Adam Ate Evil" follows it on the EP as the longest track of the six, and the opening screams Pearl Jam a lot. Just hear it, you can tell that was at least a vocal inspiration. In the verses though, Ken's singing is great, I like how he's using his range to keep a melodic rock tone throughout. The song, though not as heavy as "Centerpiece", sounds fuller than "Centerpiece", and the music has sort of a dreamlike quality underlying the singing. Rick's drumming is improved too, and Mario's guitar solo helps add some rock to the later stretches of the song. It's close, but I think I do like "Adam Ate Evil" more than "Centerpiece", but cause it sounds like a more complete song, with Ken's great range on full display! 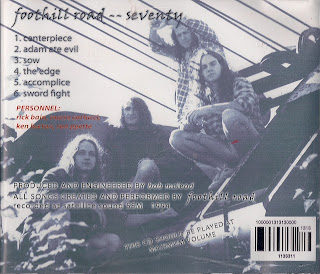 Third is "Sow", which starts with a slow bass line and drumming before the guitar kicks in a slower interesting sounding riff. Ken's singing is at it's heaviest so far on this song, with a gritty slowness perfectly suited to the material! The chorus isn't as good as the verses though, with a low grungy sort of style that seems to take away from the harsher mood of the rest of the song. Solid song, it has a unique sort of sound compared to the rest of the EP! Mario's playing really well on here, though his solo is way too short, and Ron's bass work is at it's best so far! This is followed by "The Edge", which has a great experimental sounding opening before getting into some nice fast riffing! I really like the melodies in the early portion of the song, but the energy seems sucked out during the verses. Odd when Ken's singing is so good though, you think everything would be punched up! What a range he had, why isn't he in any bands nowadays? The latter half of the song helps build heavier and heavier, with a nice guitar solo and more aggressive drumming, though it ends way too abruptly. This is definitely a standout of the album, especially the last half of it, showing all of their strengths as a hard rock outfit very well!

"Accomplice" starts out fifth with an odd jazzy start, well played by Ron and Rick, with nice drumming and some solid bass work! In a flip from earlier songs, Ken's singing is more reserved than the music, returning to a Smashing Pumpkins-eqsue tone and a low key approach. The chorus picks up vocally though, while the music keeps on the same level, which honestly gets repetitive. The song is very well played and doesn't sound generic, but the instrument players don't change things up enough. I like the song, especially the choruses, but it needed something extra to boost it. "Seventy" ends with the shortest song on the EP, that being "Sword Fight", which starts rather softly despite it's title. When it kicks into gear, it's fast paced but not very heavy. Similarly to "Centerpiece", it's paced well and has aggressive singing, but it sounds empty and the bass is mixed too low. Ken's singing's on form, and I like the introduction of harmony vocals on the chorus, while Mario's guitar work is as good as it was on earlier tracks! It's catchy like "Centerpiece" too, and it's fitting that two songs so similar bookend "Seventy"! I would say "Sword Fight" is a bit more unique, and though it has issues (like another abrupt ending), it's a solid closer to Foothill Road's debut album!

So how do I grade Foothill Road's debut EP? Well, it's a solid hard rock release with a lot of grunge and early 1990s influences that help shape it's sound! The band was very talented, from the really good range of Ken Luxton to Mario Carlucci's catchy riffing, while Ron Pyette and Rick Bain shone as well on the included tracks! Seeming to take a lot of cues from bands like Pearl Jam, they still carved out their own sound that stood on it's own in the local scene from the early and mid 1990s! Without comparing to their next EP, I will say that "Seventy" had flaws. The production doesn't help the material in terms of heaviness, and a few songs sound empty, almost like they were written with a second guitarist in mind. Rick's drumming seems too cymbal-oriented, and I can't make out Ron's bass work more often than not, though his talent was ever present! Plus, the songs do seem dated to the time, and don't sound too unique if you're familiar with grunge and similar genres. The right pieces are present on "Seventy" for a great album, and they delivered a fun and very listenable EP that they would hopefully improve on with their self-titled follow-up a few years later! Don't let this 1990s gem slip you by, give it a listen at the above links, or contact Mario to get this (and other) Foothill Road albums!

So there's this month's CD review, and what will we review next month? Well, if anything new comes out before July 27th, it will be a new release from a local band, and if two (or more) come out, we'll go by band prominence. The only exception would be a potential new Woods of Ypres CD, as it's too soon from when we reviewed "Woods I". If nothing new comes out, we will likely review Gates of Winter's 2008 full length album "Lux Aeterna", as it ties in well with keyboardist Brian Holmes' scheduled concerts next month with his progressive rock band Machines Dream. So whether we review "Lux Aeterna" or something new, stay tuned next month for our 25th monthly CD review! That's all for tonight, but stay tuned for a new news post tomorrow! Thanks everyone!
Posted by The Sault Metal Scene at 7:50 PM