With a new year upon us, its time to get back to our monthly CD reviews at the SMS for 2012, and for our 31st formal CD review on here, we're dipping into the local archives due to a lack of new local metal releases this month. That said, with this band's guitarist rocking the area earlier this month, we're taking a look at defunct local hard rock band Foothill Road's self-titled second EP today! Released circa 1996 during the band's Copetown, Ontario-based period, "Foothill Road" was recorded at Comfort Sound Studio in Toronto with producer Andrew St. George, who also mixed the EP at Le Mix in Etobicoke. The band's lineup on this EP includes all of their members from their first disc "Seventy", including ex-Spy Vs. Spy frontman Ken Luxton, ex-Sneaky Pete guitarist Mario Carlucci, bassist & current Pittsburgh Penguins scout Ron Pyette, and drummer Rick Bain, alongside guitarist & backing singer Mark Oliverio (now of Boogie Fever), who had joined Foothill Road in between albums. This album is long since out of print, but contacting band members directly can probably score you at least the mp3 files, and the whole EP except "Red" is streamable on their posthumous MySpace page.

I've also posted the entire disc onto our YouTube channel, so click here or search for it on YouTube to stream it in full! Each song title below is linked to my YouTube upload of that song as well. Slightly smaller than "Seventy" with only 5 tracks at around 22 minutes in length, let's start this review with the opening song, "Cavern"! (Updated on September 29th) 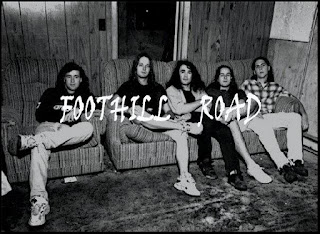 "Cavern" leads off the "Foothill Road" EP with an interesting drum & bass intro that has a clear funk inspired sound, but some nice guitar from Mario Carlucci (I think) adds some rock flavour after a little bit! The opening riff has a funk-ish hard round sound, and Ken Luxton's Billy Corgan-inspired vocals fit well overtop of everything, though the lyrics (which seem to tell of what goes on deep in the mind) do get fairly repetitive. Mario's guitar solo is solid here too, but too short for my taste. It's not a terribly heavy or long song, but it definitely fits as a 1990s hard rock number with some added spice, and Mark Oliverio's presence does help fill things out a lot, as the lack of a second guitarist on "Seventy" was a big flaw. Good song, and it starts off this EP on a rocking note! Second on the disc is "Fifteen", which starts slowly with a Western-tinged intro, almost like you're journeying alone down a long road, but when the full song kicks in, it's a slow hard rocker with a good beat! The verses are reserved with soft singing from Ken, but the choruses pick up in intensity, and there's a nice contrast between these parts of the track. Ken's singing doesn't seem as rangy as I've remembered, but it flows well with the song's pacing, and though it's different from what I'm used to from Foothill Road, I enjoy this track more than "Cavern"! A guitar solo or some more audible bass work would have helped though.

Third on this EP is the longest featured track, "Elliptical Foam", which immediately gives a spacey vibe amidst the hard rock sounds before slowing down into a dreamlike verse. Ken's soft singing is nice here, and Rick's drumming suits the backing music well, but I'm not feeling the chorus as much. I'd like to hear more energy in the vocals as a contrast, and Ken's vocals in general sound muddy and lost in the mix of the rest of the band in the chorus. The bouncy guitar work is effective though, and musically, this probably shows Foothill Road's collective talents the best here, especially late in the track when the energy and speed pick up considerably! Here, everything seems to be firing better, but the guitars do sound a bit chaotic at points. "Elliptical Foam" isn't a bad track, but it's definitely not my favourite on the EP, and I would have liked it to be a bit heavier with more varied singing while retaining the same overall atmosphere. 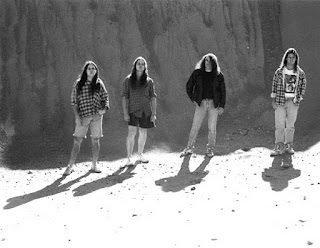 The fourth song is "Ignorance", which has probably the best and most well thought out lyrics on the EP! The song starts with a soft ballad-ish vibe, which maintains throughout the track, though the choruses are a bit more energetic. Ken's singing fits well, and the guitar playing is nice and flows effectively (including the guitar solo), but if you're looking for heavy material, this song won't appeal to you the most. I like it more than "Elliptical Foam" as a sheer song, and there's a hint of aggression late, but it's basically a straight ballad, and though it's not heavy, I enjoyed it for what it was! "Foothill Road" closes with "Red", which ends the EP much like it started, with a heavier short rock number, and it's probably my favourite song on this disc! The lyrics are very repetitive, but Ken's singing hits the range and aggression more like we saw on "Seventy", and Mario & Mark's guitar work is really catchy throughout this song! I like the guitar solo too, and there honestly isn't much to complain about with this track beyond an abrupt ending, the length, and the repetitve lyrics. This feels like a natural progression from "Seventy", plus a much needed second guitarist, and it's definitely worth checking out!

So how does Foothill Road's second EP compare to "Seventy"? It's better in some ways, and a step back in others. On the positive side, the production's better and clearer than on "Seventy", the addition of Mark Oliverio was extremely welcome to fill out their sound, and nothing on "Foothill Road" is bad, especially on catchy songs like "Red" and "Fifteen". Mario and Mark's guitar work is good, as is Ron Pyette's standout bass lines and Rick's dependable drumming, and Ken's singing fits the material well! However, I found that this EP took a more reserved and less heavy style than on "Seventy", and when you compare this material to songs like "Adam Ate Evil" and "The Edge", there's a noticeable dropoff in heaviness and, in some respects, energy. I especially noted it in Ken Luxton's vocals, which weren't nearly as rangy as they had been. Maybe it was new influences or their sound progression, but honestly, I have to say that I enjoyed "Seventy" more. The production and added guitars is great, and the songs are solid, but I found this EP was missing the bite that was on "Seventy". Still, this is a very good EP from a talented local band, and hopefully you guys check it out in some way to enjoy some 1990s hard rock as only Foothill Road could deliver!

I hope you guys enjoyed this month's CD review! So, what CD is being reviewed on the SMS next month? Well, for February, I actually have some fairly good ideas of what could be reviewed next, so here's how I'm breaking it down. If a new CD comes out next month, it will probably be a review of that CD, and for what could be next on the local metal front, click here for this month's "Where Are The New Albums?" post, which we're updating on Thursday. Mike Haggith's new album "Neighbourhood Watch" is a possibility, depending on how long the illness-related delays are, but I can't say for certain as of right now. I will say that next month's review will not be of a Woods of Ypres album ("Woods V" is tentatively lined up for March), Foothill Road's posthumous live CD, or (if I had it) Amethyst's debut cassette, as it'd be too soon from my last reviews of theirs. If nothing new comes out next month, I plan to review another of Sykotyk Rampage's 2011 albums, as it'll be six months since we reviewed "Zombiez" next month. If we cover the original crash band next, I'll likely review "Karrs" due to it's heaviness compared to their other 2011 albums, and I'm giving it priority as a review for the next month where nothing new in the local metal scene comes out due to the delay to review it. Stay tuned for more on our next CD review on the SMS over the next four weeks!

That's all for now, but stay tuned for LOCAL CONCERT ALERTS, Battle of the Bands updates, and more on the SMS tomorrow! Thanks everyone!
Posted by The Sault Metal Scene at 4:04 PM

This blog is nice and very informative. I like this blog.
blog Please keep it up.