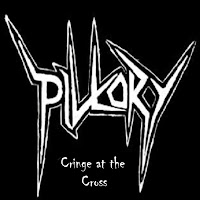 With news coming slowly right now, it's a great time to post our 55th monthly CD review at the SMS (and first of 2014), as we're looking at local thrash metal band Pillory's debut demo EP "Cringe At The Cross" today! Independently released on December 19th in honour of the one year anniversary of founding guitarist Andres Duchesne's passing, the disc was recorded locally last year at Shez Studios, with production by Pillory and their Issues bandmate Chris "Mullet Studborne" Shelbourne. "Cringe At The Cross" features founding & current Pillory members Robert Sartini on vocals, guitar, and bass, and Bret Shuttleworth on drums, with no other past or present band members featured. Copies of Pillory's EP can be bought for $5 via band members or presumably at their upcoming concerts, and you can also stream the entire disc for free at Robert's personal YouTube channel (each song title is linked below to it's YouTube version), but support the band by buying it Featuring 31 minutes of music in just 5 songs, let's begin the review with the first song!

The EP begins with "Fatal Woods", an almost 8 minute long track that opens and closes with quotes from the movie "Friday The 13th" before actually beginning with a slower building intro with nice melodic guitar and solid drumming for two minutes. The song unleashes into thrash metal fury with very cool guitar soloing from Robert, and it might be worth noting that compared to their only full concert to date (in November 2012), Robert's vocals are much harsher, aggressive, and higher pitched, perhaps taking influence from Chuck Schuldiner, or his other band Crimson Crusade? The instrumentation on this song is well done and melodic while retaining a metal bite, and despite the length, it never feels like it's dragging on for too long, but something doesn't feel full about the sound when there's no vocals, almost as if a guitar track was left out. Very brutal and well performed beginning to this EP though, and Pillory fans should be right at home!

Second is "No One Answers", which leads off instantly into a fast thrash pace with solid bass and great drumming from Bret, though it did seem to take forever to get into the first verse of lyrics. I love the aggression and galloping guitar riffs, and the vocals are constant from "Fatal Woods", but the softer stretch 3:30 in (including the solo) feels like it came from a different song, but it ends strongly! I would like to hear Robert contribute more vocals, but this continues with the speed metal success of the first song! Next is the EP's title track "Cringe At The Cross", which opens softly like on "Fatal Woods", but benefits from awesome drumming from Bret and a shorter length, but again, the vocals take too long to be introduced. A bit slower when it's fully going, there's still a lot of very nice instrumental work, and Bret really shines, but it could stand to be a bit more melodic, and once the verses and choruses come in, there's not a lot of variance, but there's plenty of aggressive action to go around!

Despite being over 5 minutes long, the next song "Onward To Death" is the shortest track on the EP, and by far the most brutal and straightforward, with well used vocals, very nice guitar riffing, and a full catchiness to everything that works to the band and song's advantage! A surefire mosh pit inciter, Robert and Bret are firing on all cylinders, with only the guitar solo underwhelming somewhat based on how it flows with the rest of the song. The ending is slightly abrupt too, but I really enjoyed the intense metal edge to "Onward To Death", and it shows the guys' strengths well! "Cringe At The Cross" closes with "Shattered By War", a 7 minute original that fits well with it's predecessor tracks! Another long melodic instrumental intro kicks this one off, and while it shares a lot of similarities with songs like "No One Answers" in structure for the first half, it seems to end after 4 1/2 minutes and then restart as a mellower instrumental ballad of sorts that builds back into metal territory to close the EP on a high note. Another very solid track, but it really feels like two joined together (albeit well done for each half.)

So, what were my final thoughts on Pillory's debut demo EP? It's a very nice and brutal sampling of their early original material, and for a city that hasn't had a lot of straight thrash bands in recent years, Pillory fill that void well! Though only half of Pillory's lineup features on the disc, it's hard to tell, with Robert Sartini proving up to the task on guitar & bass, and Bret Shuttleworth continues his promise as a rising drum talent to watch! Robert's aggressive Death-esque vocals are also nice to hear, but at times, they did seem strained and rough, and with the exception of "Onward To Death", the verses seemed to come too late and run too quick. The production was really solid too, but at times, there were emptier patches, and a couple songs seemed too similar to each other. I was also curious to hear some of their newer tracks, or contributions from newer members, but much of the aims of "Cringe at the Cross" were to honour the memory of Andres Duchesne and the songs he wrote and played with Pillory, and in that regard, I can see why some decisions were made.

Overall though, Pillory's EP is a well made, very brutal, and nicely performed first disc from this promising young band, and I'm very curious to hear where Robert, Bret, Josh, and Tyler go in 2014! Pick it up A.S.A.P. at their concerts and by messaging band members! Our next CD review is to be determined, and though I'm leaning towards The Hiroshima Mutant Mindframe's new digital album, Telephone & Address' "Rotten EP" is possible if I get a copy. Either way, stay tuned for updates soon on that front, and for more news soon! Thanks everyone!
Posted by The Sault Metal Scene at 12:00 AM