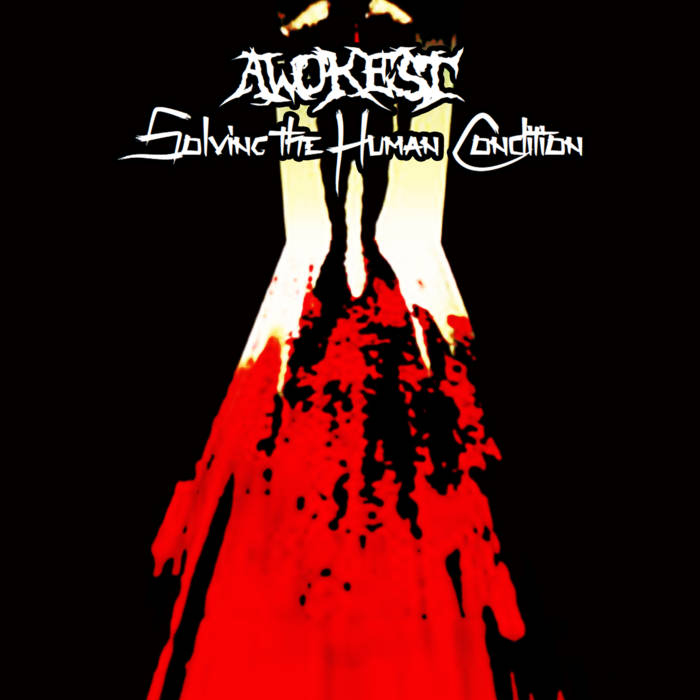 It's now time for our 121st monthly CD review at The Sault Metal Scene, and after a three month detour into the local music archives, we're looking at a new release for the first time since March, and in a mild surprise, that album is local experimental/death metal solo project Awokest's debut paid studio album "Solving The Human Condition"! Quietly & independently released to their Bandcamp page on April 19th in conjunction with a better publicized free YouTube copy, this is the paid follow-up to January's compilation album "Enter the Nightlands", though this album appears to exclusively contain new recordings. Awokest is represented here by solo artist Chase "Dick Jerkins" Wigmore, and if there are other collaborators as have been teased in prior Awokest descriptions, they are not credited. Unlike it's predecessor, "Solving The Human Condition" is on sale on a "name your price" model, and while this means you can buy it for free, consider paying something to support Chase's work!

Song names below are linked to their Bandcamp copies, and I believe there have been references towards a physical CD pressing of this album too, so contact Chase or see him/Awokest in concert for details in that regard. With 12 songs running for 54 minutes, let's kick off our second Awokest CD review at the SMS! The album starts off with "Real Fucking Thoughts" (he titled it, not me!), which is hard to describe, but it's more or less an extended sample-laden intro that gradually gets more and more sinister before devolving into an electronic music stretch after about 2:30, before closing with a minute of eerily cheerful music set to what sounds like someone being beat up, plus commercial samples (I recognized an old Concerned Children's Advertisers PSA.) Metalheads will like Chase's background screaming after his ominous thoughts. This track works as a stream of consciousness opener, and it's very creative, but if you're looking for true metal, I guarantee you that's ahead.

Second is the song "Machine God of Hate", and this fully brings things into Awokest's extreme metal wheelhouse! This is an intense jackhammer of a song that owes a lot to black metal in it's grand nature and Chase's high shrieking vocals, though it still finds room for some electronic flourishes, like the beeping before the verses. Goodness knows, I don't know what the lyrics are, but he sure sells them! This song is a pure wall of noise, but it's well performed, brutally heavy, and would incite a mosh pit at any concert it'd be played at, so metalheads will want to take notice! That's followed by "And Then The Reign Came Down" (sic), which opens with an ominous, almost "You Can't Bring Me Down"-esque intro before chugging into a more reserved, atmospheric instrumental, with Chase's harsh vocals sounding more processed as a result. I wish this song was clearer and more in-your-face, as there is something here, but aside from the pair of drum-led breakdowns, it feels like it's being held back by the post-production.

Track #4 is "She Crawls Towards It", which feels more like a demo than it's predecessor tracks, with the song proper almost sounding like it was recorded on cassette tape, if that makes any sense. I like the melodic riff contrasting with the grimy, processed rhythm section, and the female backing vocals (is she the crawler?) are a nice touch, but Chase's vocals sound very muffled and are sometimes inaudible. Elements of this song work, and I wish it had a cleaner recording, but it gets the job done for electronic-tinged black metal if you can look past that! Next is the album's title track "Solving The Human Condition", which runs for an album-long 7+ minutes. Starting with sampled audio from an interview with serial killer Edmund Kemper, this song has a chaotic wall of noise appeal, and it has more of a groove to it than predecessor tracks, but vocals don't kick in until almost 3 minutes in. These are cleaner vocals, so if you like hearing the words, here you go!

I don't know that this song really needs to be 7 minutes long, as it doesn't really vary off of it's initial trajectory (maybe a solo would help), but the music is top notch, and Chase's drum tracks are fast and brutal to go along with everything! If you liked "Machine God of Hate", this will be an epic, if overly long follow-up! Then we have the under 2 minutes-long "Getting Away With Murder", which is not related to the Papa Roach song beyond the name. The album's first song with no vocals of any kind, this is a steady interlude with solid guitar plucking and restraint. I got a The Killers vibe at first, but the song never switched gears, if that makes any sense, and the progression gave the song an uneasy ambiance that definitely felt intentional. Hard to describe, it works for it's length, but it feels like an unfinished intro.

Seventh up is another longer track, "Rites of the Wendigo", whose name references a man-eating creature in Algonquian folklore. This has a catchy drum rhythm that never seems to let up (this is a good thing), but the vocals are very muddled into the music, and it's nigh impossible to make out any of the lyrics. This song has an intense folk metal quality before the breakdown around the 3:30 mark, but it eventually gets back into that groove sans more intense, evil screaming from Chase near the end. Like on the title track, I don't think this song needed to be as long as it is, as it just pounds and chugs along with not enough variance for my liking, but it works well otherwise! Then, we have "Behold Here Is A Man", which is only barely a song, as it appears to be an audio depiction of a murder and it's aftermath (even ending with a scream), with only light backing instrumentation and hushed spoken word vocals overtop reflecting the title. The dark nature of this track is hard to ignore, but if you want a proper "song", this ain't it.

Next is "Hunter By Blood", which brings back the assaulting extreme metal of prior tracks at full force, after an intro suggesting a physical assault. Like on earlier full-force songs, this has a chaotic black metal vibe, but the liberal usage of sampled sound effects can get in the road of the instrumentaton. Chase's shrieking is amped up and brutally intense as usual, and we get a rare guitar solo here too, albeit during a stretch with vocals. I like the guitar work and the strong bass, and the track hits you like a truck, but the ending with police sirens does come out of nowhere to a point. If you like metal, this is a massive highlight! Afterwards is the album's shortest track, the 95 seconds long "A Whole Lifetime Of Disappointment", which isn't a song at all, it's actually a spoken word rant from the viewpoint of a murderer who wishes millennials would put up more of a "challenge", and I'll leave it at that. This almost feels like a very blue stand-up routine, so take that for what you will.

The penultimate song on "Solving the Human Condition" is "Mark My Words", which opens with about 2 minutes of ominous background noise before fully kicking into an intense extreme metal attack like on "Hunter By Blood" and it's predecessors. This has more of a chaotic, experimental quality without subscribing to usual musical structure, and while I think there is some vocal work, it's heavily processed and nigh undecipherable. If you like a crushing wall of noise in your metal, this will do it, but I'd have liked some vocal input at least, and it's not something you're gonna be humming after. The album closes with "Feelin' Fine", which is a total 180° turn in sound from it's predecessor, almost like the storyline of songs' past has led to this as a coda or epilogue. It's a pleasant, cheerful instrumental with some synth input and psychedelic effects, and it's well performed, but it's such a jarring shift that you almost have to hear the whole album beforehand to appreciate it. Interesting closer, if nothing else!

So, what are my final thoughts on Awokest's first paid studio album? Even if Chase calls this a demo, it's a fully fleshed out demo that will appeal to fans of his heavier and more aggressive music! Though lyrics were not posted online, this does feel like a concept album about a murderer, so when you do hear discernible words, be prepared. If you can handle horror movie-esque lyrics, the album largely delivers the goods, especially if you like noise and black metal, with songs like "Machine God of Hate", "Mark My Words", and the title track delivering a crushing attack that doesn't want to let up! Chase puts his multi-instrumental talents to solid use, and he's never sounded more evil, but the album is uneven as it progresses through the story. The longest songs don't have to be that long, the shorter interludes don't stand on their own very well, and for such a talented guitarist as Chase is, I'm shocked we didn't get more guitar solos. The mix on some songs could have been improved too, as vocals could be very muddled on certain songs.

If you were disappointed that "Enter the Nightlands" was largely a compilation, and you wanted more of Awokest's newer brutal originals, "Solving the Human Condition" will make up for that, and hopefully Chase builds on this well when he finishes "Anima Sola", whether we ever hear it or not! Give this album a listen and/or buy it above, and I hope you guys liked this month's CD review!As for next month, I'm currently leaning towards Black Cloud's debut album "Abstract Sounds", which came out earlier this month, but could there be a surprise contender? That's all for today, but stay tuned for more news and notes on the site tomorrow! Thanks everyone!
Posted by The Sault Metal Scene at 9:58 PM