It's now time for the second installment of our WLSO 90.1 FM retrospective posts, which kicked off this past Tuesday by looking at the station's Internet Archive remnants from the earliest possible date in 1997 through the year 2000. Today, we dive into the early 2000s in their last years before moving to their most familiar URL, and there's a lot of interesting surviving material from this era to look back on! Again, to set the mood, listen to Lake Superior State University's modern-day internet station Superior Radio while reading and exploring the Internet Archive's Wayback Machine links below.

We'll pick things back up with WLSO in 2001, with The Internet Archive logging six copies of the website that year, which you can check out at this link. The big front page news that year related to the station broadcasting live at Lake State's end of the year luau and that summer's Soo Locks Festival. While still managed by Bill Dawson, the station's genre directors had heavily changed compared to 2000, including new hires like Erik Isele (loud rock), Josh Palotti (punk/ska), and Lorin Kozlowski (alternative). Schedules for the spring, summer, and fall semesters that year are viewable at this link, carrying on the same layout as they had in late 2000. A lot of holes were present in terms of these archived schedules, but listeners that spring could hear Lorin host Fireball Music on Wednesdays at 4:00 PM, while Nick (no given last name) and Simon Moon hosted their own midnight punk blocks on Fridays and Saturdays each.

The previous year's metal show Brothers From Other Mothers returned over the summer semester, now hosted by Rustang & DJ Be Seedy, on Sundays at 8:00 PM. That fall, WLSO listeners could hear Erik Isele & Andy host a loud rock block on Fridays at 3:00 PM, while Andy & Robb co-hosted a punk/alt-rock block on Saturdays at 6:00 PM, and Josh Palotti manned a ska punk block on Sundays at 8:00 PM. Among non-heavy/punk shows, 90.1 FM fans could hear such DJs as B-X Rocket, Captain Moon Unit, DJ Spicy Chef, Kon Phusion, and The Tonemyster, while such creatively named shows as Stealthy Chicken Showcase, the possibly metal-focused Shredder's Eve, the returning Homemade Erratic Bear Bones, and What? (which aired "anything but Britney") also made the airwaves. As well, Frank Blissett's long-running Country Roads and Frank's Gay 90s Revue continued into this time period. 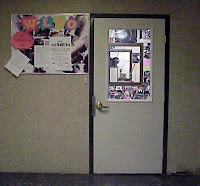 This article on WLSO's 2001-era site notes their then-criteria for prospective DJs, including how to sign up for a summer show, their 18+ age limit, priority selection for then-students, and even the dues on-air talent were expected to pay to maintain the station headquarters and events ($5 per semester with a show, though they were briefly $10.) As well, this link noted how you could air public service announcements on WLSO, as part of their FCC licensing. The 2001-era website is the only one to feature surviving photos of WLSO's Brady Hall station headquarters via this link, and while not all work, you do get a decent look at the offices for DJs at the time. Unfortunately, archives of WLSO's 1999-2002 website layout indicate that it didn't receive nearly the same amount of updates and and attention by 2002, with schedule archives not showing any listings, and no affiliated events listed after that February.

Circa November 2002 (and as first archived that December), LSSU's website received a heavy overhaul that only survived until around September 2003, though time has not been kind to it, as the barren white front page would indicate. In the 2002-2003 school year, the station's manager was Hollie Arman, while Kate Andary took over as the punk/ska genre manager. One major disappointment of WLSO's website that year was the station's schedule, which only listed blocks by the DJ's first name (Frank Blissett's programs aside), so hopefully listeners knew who was airing what! The most interesting website additions at this time were their automation charts (viewable here below "Music Department"), which list the most played songs on WLSO during three weeks in the fall of 2002, and which were not visibly updated in 2003. The charts are only listed by title with some exceptions, but if you look them up, you can see that such diverse acts as D.O.A., The Charlie Parker Trio, and Avril Lavigne got heavy airplay then!

Updates were few and far between on WLSO's website from 2002-2003, despite the layout overhaul, but things would tick upward for the station's internet presence when they received their permanent and final URL, http://wlso.lssu.edu, but that's a story for next time. I hope you guys liked this second installment of our WLSO retrospective series, and this will return at some point soon when we start looking at WLSO in the mid-2000s, but stay tuned for more a new news post next! Thanks everyone!
Posted by The Sault Metal Scene at 12:00 AM