After our last Woods of Ypres-dominated news update, we're still not done with updates on them, but today, we have a lot more to discuss as well! I originally wanted to hold off until tomorrow, but we have TWO VERY SHORT NOTICE LOCAL CONCERT ALERTS, so here's what you should know, along with some new videos and a local drummer's contest! So here we go!

Despite the postponing of the Pauline's Place benefit show (yes, I know there was no rain after 12:00 PM, but remember, no human can 100% predict weather a day ahead), Frightlight's show goes on, and it goes on TONIGHT! The horror punk/metal quartet WILL indeed hit the stage tonight, this time as newly added entertainment for tonight's Art In The Parking Lot event on Queen Street East! They'll be playing at the parking lot between White Space and Hogan's Office Equipment and across from The City Meat Market at 9:00 PM sharp! The Arts Council of Sault Ste. Marie has been putting on this art event since 4:00 PM today, and the addition of Frightlight appears to be a last minute thing following the Pauline's Place postponing. There's no announced cover charge, it appears to be all ages, confirm your attendance at the official Facebook event page! See if you guys can make it out! Should be fun, and unique! Note that this concert is RAIN OR SHINE, so if it rains, Frightlight will play on! Also, note that the picture is former Fitswitch guitarist Kevin Powe's entry in Frightlight's album cover contest! Voice your opinions on it at this location! I think we have a winner! Considering that this is also a preview for the show, here's a video to show you guys, of Frightlight playing their song "Fright Night"! 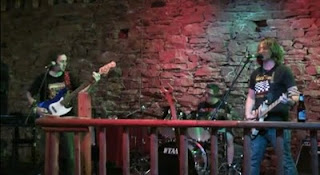 Next up, here's another short notice concert, also taking place TONIGHT! Remember that band Sativa Rose that I mentioned last week from recent Foggy Notions jam nights? Well, they have booked an actual concert at Foggy's TONIGHT! They actually played yesterday too, but I missed that one, my apologies! Sativa Rose, the new local metal trio featuring singer/guitarist Andrew Angelic, singer/bassist Adam Veale, and former Dreamscape drummer Alex Palmer, made their live non-jam night debut last night, and return there TONIGHT! They'll hit the stage for a set of metal covers at 11:00 PM tonight at Foggy Notions, and according to the Facebook event page, they've got some Megadeth, Iron Maiden, Misfits, and Dokken covers in store, among others! They sounded promising in the first live clips we saw on YouTube user MrJohnveale's channel, and should do great tonight, as they surely did last night! Remember, you must be 19 to enter Foggy's tonight, and there will be a likely cover of $3. Check the above links for more information, and for a preview, here's Sativa Rose's newest video, uploaded last week, of their jam night cover of Ozzy Osbourne's "Bark At The Moon", featuring none other than Tym Morrison on lead vocals!

Thirdly today, it's the fourth and last installment of Woods of Ypres' tour vlog! This was uploaded onto frontman David Gold's YouTube channel not long after he posted the third installment, detailing the last chunk of the band's likely final North American tour, as the band traversed the East Coast of The United States and closed the tour in Toronto! You'll see, as you saw in the previous vlogs, lots of concert clips and road footage, but you'll also see such notable moments as Woods of Ypres' encounter with a taxi, David Gold's ladder descent in Brooklyn, the band's happy visit to Peter Steele's favourite bar, their van break-in incident, and which band member was the bassist for "Gales of Winter" according to border documents! Good stuff, David even says this could be the "best yet" of the vlogs, so check it out below! More Woods of Ypres news to come very soon!

And finally for today, it's one final push to vote for Jake LaLonde! Nixxon Dixxon's drummer has been floating around the top 3 for a few days now in The Musicians Institute's Full Ride Scholarship Contest (including periods in 1st place), and the contest ends TOMORROW, so you have limited hours to vote for him to help send him to Hollywood for the live finals to earn a full scholarship and $10,000 cash! The local community has rallied behind Jake in HUGE ways to help him get to the upper echelon of the vote totals, and of course, the higher he finishes, the more likely that Musicians Institute judges will pick him for the live finals! Remember, with the remaining time you have, CLICK HERE TO VOTE FOR JAKE!!! If you don't have an account, you have to register to vote, but it's free and easy! Best of luck, I hope Jake makes it and wins it all!

Also, while we're on the subject, you guys know that Jake IS going to The Musicians Institute regardless of how the contest finishes, right? Well, are you still wondering how this impacts Nixxon Dixxon? Well, frontman Brandon Carr's most recent status update on his personal Facebook page says this: "Last Casino Gig, for God knows how long.", referring to tonight's show at The Rapids Lounge at Kewadin Casino. A later reply says "...Jake is leaving for school. So our very last gig is at The Bird next weekend." So from that, we could surmise that, at the very least, Nixxon Dixxon are going on hiatus while Jake's at MI, if not breaking up. I hope they don't break up, cause they're too promising of a band to up and quit like that! I'll keep you posted on both Nixxon Dixxon's future and Jake's quest for the full ride as I hear more! And, of course, VOTE FOR JAKE!!!

That's all for today, stay tuned for updates from The Barking Eye, Woods of Ypres, Kiss, and much more very soon, so be on the lookout! And GO TO TONIGHT'S SHOWS!!
Posted by The Sault Metal Scene at 7:29 PM