Good afternoon! We're nearing the biggest concert of the year, and we have some coverage relating to it later in today's post, and some Free Refill updates, but before we get there, we have two new hard rock bands from the Sault Michigan area to show you guys today! Both come from searches I've been making of bands in nearby towns to the twin Saults (i.e. within 45 minutes driving distance), and these are the only two new bands I've came across that have substantial band information or material to include on the SMS links. Basically, if they don't have songs or videos, they need lots of information about the band and their sound, and/or scheduled concerts, and these two bands fit the criteria! So let's begin with the two new bands!

First, we have Self Control, a new hard rock band from Pickford, Michigan....OK, not "new", they formed in January, but they're new to the SMS! The band features singer/guitarists Donny Newell (you'll recognize him as the frontman of Absolute) and James Kibble, alongside fellow members Nate Reid, Jammie Brown, and "Cletis". The band lineup is kind of jumbled, which is why I didn't give complete instrument details for most members. Not a whole lot to say about Self Control, they appear to have played live at least once judging by their photos on their MySpace page, they're working on some original songs inspired by a long marital separation, and the band appear to (at least) be taking a break because Donny's actually serving his country in Iraq. Kudos to him! Their page is custom designed, and it features two original demos for you to check out! Quality isn't fantastic, but if gives you a taste of their sound. "Regret" is a mellow ballad, it's effective but not my thing, while "Allowed To Hate" is a hard rocker with good guitar work, great drumming, and gritty vocals! Not bad, though if you're the type that demands good production regardless of talent, you'll likely think less of the songs. Click here to check out more from Self Control!

The other new band I'm sharing today is TraynWreck, who describe themselves as "a rock n'' roll 80's hair band" with a modern twist. The band currently only has two members, drummer Alex Traynor and rhythm guitarist/keyboardist Sam Lalruatpuia, who you may recognize as the former keyboardist for Kincheloe metal band Silent Despair! Based out of Rudyard, TraynWreck formed in November of last year, and are looking to complete their lineup, they play 80's metal and hard rock covers, though they don't have any audio or video yet on their MySpace page. However, they've gave it a very nice layout and design, and there's a huge bio detailing their musical talents, background, and how they formed, as well as a detailed (and blunt) description of Sam's opinions of Silent Despair and why he left. There's definitely enough band information here to get them SMS attention, though I would like to hear how they sound! I'll keep you posted on both Self Control and TraynWreck as I hear more!

And now, Kiss updates! They're coming to The Essar Center on TUESDAY, the time's nearing, and The Sault Star has continued with coverage of the show and the events surrounding it! Both of these come from The Sault Star's Brian Kelly, and the first article was posted yesterday, all about the pre- and post-concert festivities! Entitled "Kiss fans salute band at downtown bars", it discusses the planned after-party at The Rockstar Bar, and (this is news to me) a pre-show party at Foggy Notions! According to the article, The Rad Zone and Turner Up's Len Ward will be hosting both parties, and he was interviewed for the article as well! He thinks this will be the biggest show that The Essar Center has ever seen, and I wouldn't disagree with that! Among other notable portions of this article: The Foggy Notions pre-show party has FREE admission, is 19+, and canned good donations are accepted, and yes, you can dress up and wear face paint! Evan and Josh Belleau from Garden of Bedlam (who open the show) are expected at Foggy's, with the whole band (as previously reported) being at The Rockstar Bar afterwards. And, it tells you that tickets are still available on some sites for as low as $91! Click the above links for more!

The second article, entitled "Sheehan wants to Kiss up with band", partly leads from the first in topic (Kiss) and in one specific area. This one features interview excerpts with Ward 2 Councillor Terry Sheehan, a vocal fan of Kiss and supporter of the efforts to bring the band to Sault Ste. Marie. He announced plans to hopefully set up a meeting with Kiss prior to the concert on Tuesday, and he hopes to try and set up a yearly Kiss convention in Sault Ste. Marie! I agree with Terry that the Sault area is full of Kiss Army members and fans, and a convention would be cool, but what do you guys think? Lots of other Kiss talk on that article, click here to check it out! To close today's Kiss talk, here's a new YouTube video from user pipesofpanic, featuring a slideshow of photos from Kiss' 2007 show at Kewadin Casino set to classic Kiss demos! Good shots, maybe you can use it as a preview of Tuesday's concert! 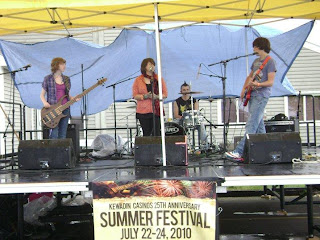 And finally for today, here's some new updates from Sault Michigan hard rockers Free Refill! I know I forgot to mention their Sidewalk Sales performance yesterday, my apologies, it completely slipped me by, but I'll make it up to you guys today with news on their new band pages! While still using their MySpace page, singer Mary Gilbert has created a website for the band, which you can check out at http://www.freerefill.co.nr! It features a short biography of the band, upcoming tour dates, and the first photo that I've seen of the band since Tyler Wall's departure! It should be noted that the site's not finished yet, with the links for the band's multimedia all being inactive, and the store page is just a paragraph in Latin, but it's a good start, better than their last external website! Check it out at the above links, and for you Twitter users, Free Refill are now on Twitter as well! Only 3 tweets so far, and only one has a direct relation to the band, but hopefully we'll get more soon! The Sault Metal Scene is following them, why don't you guys? More on Free Refill to come, including this weekend, when they play at The Sugar Island Music Festival!

That's all for today, but be sure to tune in to The Sault Metal Scene of the next few days, especially tomorrow, when we preview the Skull Fist show at The Canadian Nightclub on Wednesday and, of course, KISS ON TUESDAY!!! Stay tuned for any and everything you should know for Tuesday in tomorrow's update! And of course, Kiss and Skull Fist reviews are coming mid-week as well, plus news from Woods of Ypres, Turner Up, previews of next weekend's concerts, and more, so keep an eye out! Thanks everyone!
Posted by The Sault Metal Scene at 1:02 PM