Well, tomorrow's the big day, and today's post is completely dedicated to previewing what will likely go down as the biggest concert in Sault Ontario of 2010, if not a grander title! We'll take an extended full-post preview of the concert today, including pre- and post-concert parties, what you could expect, the very cool recordings that will take place, and more! And yes, all of this information is correct to my knowledge, citations can be found in earlier SMS posts if they're not cited here. 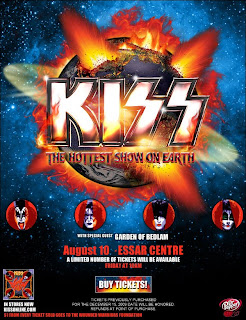 Fifteen months after the campaign started, ten months after it was first announced, and eight months after it was postponed, the wait will soon be over. KISS ARE COMING TO SAULT ONTARIO TOMORROW!!!!! The New York based hard rock legends will finally make their long awaited return to the Sault area for what promises to be one of the biggest concert events we've ever seen, and it's all thanks to YOU guys! After it was announced that Kiss would allow fan votes to determine the tour dates on last year's Alive 35 North American tour, The Essar Center and SooToday led the charge for fans to vote through Eventful to get Sault Ste. Marie high on the voting to ensure a local concert! Despite the outspoken and misguided opinions of Councillor Susan Myers, and the rampant skepticism over the fan voting, Kiss' likelihood of honouring their word, the initial "snub" on the first announced dates, and whether we could handle/afford/be big enough for a Kiss concert, Kiss announced last October that they would be here on December 15th, 2009!

But just two days beforehand, the concert got cancelled due to inclement weather on their tour routing to Sault Ste. Marie. And so we waited, be it patiently or impatiently, while skepticism returned in full force as to whether Kiss would honour their word and reschedule. But on June 21st, word came out that Kiss would be playing at The Essar Center on August 10th during their Hottest Show On Earth tour, which is just a day away, and with no bad weather to shut it down, this immensely high profile show will go on!

This is not the first time that Kiss will play a concert in the Sault Ste. Marie area. Four years ago, Kewadin Casino in Sault Michigan had booked Kiss for a major outdoor show on July 21, 2006, but the show would see itself cancelled when the band opted to do a Japanese tour instead. We don't need to retread the feelings about that cancellation that local fans had, but just like this time, whether skeptics liked it or not, Kiss kept their word! They did play Kewadin Casino on July 20, 2007, with openers Mink & local hard rockers Clownsack! They rocked the Sault to it's core, with around 10,000 fans loving every second of it! That was easily one of the biggest hard rock shows we've ever seen in the Sault area, and it's the most recorded local metal/hard rock concert on YouTube, with dozens of videos littering the site! Given that tomorrow's show is an indoor event with half the attendance, it will have a different feel from the 2007 Kiss show, but don't expect it to skimp on the experience and the atmosphere of seeing Kiss in person! As I usually do with major hard rock acts who make a return trip to the area, I'll show you guys a video from the concert, so here's a good quality video of Kiss playing "Got To Choose" at Kewadin Casino in 2007, and if you want to see more from their first local stop as a preview, just search for Kiss, Kewadin, and/or Sault on YouTube!

Of course, you'll know Kiss for trademark classics like "Rock N' Roll All Night", "Shout It Out Loud", "Detroit Rock City", "Lick It Up", "I Was Made For Loving You", their new hit "Modern Day Delilah", and many, many more throughout their long and very successful career! But Kiss don't have the total spotlight tomorrow night, as one very talented local metal band has earned the right to open for Kiss! That band is Garden of Bedlam, who beat 19 other very talented local bands (including Lion Ride, Sense of Truth, Nixxon Dixxon, and many more) at the Kiss Battle of the Bands put on by Rock 101 and The Canadian Nightclub from November 30th-December 2nd, to become Kiss' official openers for (what is now) tomorrow's concert! In a sense, the postponement has done more good than bad for Garden of Bedlam, who've tightened up and introduced new originals into their set, and basically finished the recording sessions for their upcoming debut full length album, so they're even more ready for the big stage tomorrow night! This will be, by far, their biggest concert to date, and you can bet they'll deliver their hard hitting brand of metal to the Kiss Army faithful in their half hour opening set! This will be huge for Garden of Bedlam, best of luck in this amazing opportunity of a set! As a preview for their performance, here's a live video of Garden of Bedlam's song about the Kiss Battle of the Bands, "Three Days"! 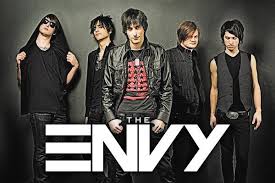 (UPDATE: 1:25 PM) I can now confirm that there will also be a second opening band, Toronto pop rock band The Envy WILL be playing direct support to Kiss tomorrow night! I initially confirmed in my "Where are the new albums?" post that The Envy wouldn't be playing because their MySpace page didn't list the Sault show, and neither did the poster for the concert that you can see at the top of this post. The band's manager, Mike Indovina (you'll best recognize him as Lion Ride drummer Iron Mike Bison) confirmed on a comment to this Kiss preview post that The Envy WOULD be supporting Kiss, and the Sault date has been added to their MySpace concert listings. So if you don't recognize the band coming on stage after Garden of Bedlam wrap up, make note that it's The Envy! They're not metal by any stretch of the imagination, but I bet there'll be some people in attendance who'll like their sound! Click the above links for more!

Now, here's you should know about this concert! I believe the start time is around 7:30 PM, though you'll definitely want to be there early, especially if you have a floor ticket! Tickets are $99.50, if still available. Hopefully you have your tickets already, but if you are still chomping at the bit for one, try this location to see if you can find tickets, as well as other online ticketing sites, The Essar Center box office, or by phone at 1-866-775-9422. I can't promise anything though, just try your best! And as another reminder, TICKETS FROM THE POSTPONED DECEMBER SHOW WILL BE HONOURED!!! That's how I'm getting in, I held on to mine, so believe my word! Also make note of the fact that $1 from the sale of every ticket for this show (Well, at least the new ones) goes to The Wounded Warriors Fund, which is a great gesture! Garden of Bedlam kick things off tomorrow night with a half hour opening set, with The Envy to follow, and Kiss to cap off this show in a huge fashion! This is definitely an all ages concert, and is bound to be one of the biggest concert events the Sault area has ever seen!

Oh, and remember when I announced on here that Kiss, in co-operation with Concert Online, would be recording most of their Alive 35 tour dates for live albums, INCLUDING the postponed December show in the Soo? Well, you're in luck! Kiss and Concert Online (now renamed SimfyLive) ARE RECORDING TOMORROW'S KISS CONCERT FOR AN OFFICIAL LIVE ALBUM!!! Yes, we WILL get a Kiss Live in Sault Ste. Marie album, as are the rest of the cities on this leg, and you can get a pre-order for it at the concert tomorrow! Just find the right booth, likely in the upper portion of the arena. You can buy the live album in advance, or online, for $34.95 on either a 2 CD set or on a USB drive! Click here for more details, and watch out for updates on our show's recording at that link as well! I will certainly keep you posted on that front, cause I wanna review our live album on the SMS! Seriously consider buying this, how often will you be in the crowd for a band's official live album?

To close the Kiss preview, here's five more assorted notes to keep in mind: (UPDATE: 8:05 PM)There, I think we're covered for Kiss updates in this preview, but if anything new comes up, either this post will be updated, or I'll let you guys know in my next post! Now I know I promised a preview of the Skull Fist/Isosceles Project/Thekillingfield concert today, but I realized that it would be horribly lost in the shuffle of all this Kiss news, so I'm going to headline a post coming tonight or early tomorrow with a preview of this show, which is gonna be awesome in it's own right! Stay tuned for that, and more, and of course, I will see you guys at The Essar Center on Tuesday night for Kiss! You wanted the best, you got the best!
Posted by The Sault Metal Scene at 2:35 AM

I can confirm The Envy are playing the show and will be direct support for KISS.

Thanks Mike, I just checked their MySpace page and yeah, they're listed for it now. When I first checked The Envy's pages from Marky's Lion Ride blog posting, a Sault date wasn't listed. I'll update that now!