Background: On May 28th, 2010, the Sault Youth Association (in cooperation with the Sault Ste. Marie Innovation Centre) held the Downtown Showdown battle of the bands at The Oddfellows Hall as a non-profit promotional event to help give bands and local youths a better understanding of entrepreneurship and self-employment in the local arts & entertainment sectors. Four bands were chosen to compete, and each performed three songs for the attendees, after which judges picked the top 3 bands to receive varying prizes. To compete in Downtown Showdown, each band had to have an average of age of 25 or less for it's members, in keeping with the Sault Youth Association's target demographic. 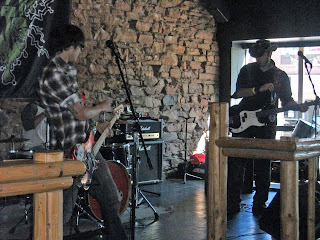 Prizes: The winning band would receive a cover story in The Sault Youth Association's free quarterly newspaper The Fresh Magazine and a photo shoot to go along with it, as well as recording time at a local studio. The second place act received a $100 Music Depot gift certificate and a professional photo shoot, while the third place band also received a photography session of their own. Each placing band also won various gift cards, including ones from Future Shop, although details on those prizes weren't elaborated on prior to the battle.

Results: Bring The Fallen won their third battle of the bands in a 14 month span by claiming top spot at Downtown Showdown, with The Fury finishing in second place for a second straight battle. The Tenagens ended up in the third position, while SBD finished in fourth overall.

Aftermath: Bring The Fallen continued to sporadically play live concerts, including many of the early Roosevelt Hotel metal nights, until their disbandment in April 2011 following numerous breakup rumours, though they reunited for a one-off gig in July 2013. The Fury weren't far behind, going inactive in their own right by the summer of 2011, though they did briefly reunite in 2014. The Tenagens would be a frequent sight at many concerts through mid-2011, though aside from a brief mid-2012 return, they've largely been inactive. SBD would re-release their debut CD "Sonic Experiments" later that year and would play at scattered live dates through 2010, though activity drastically slowed in 2011, and they're now defunct.
Some Notable Performers' Newer Bands (Metal/hard rock in italics):
The Apocalypse Afterparty (Paul Stanghetta from The Fury)
The Bear Hunters (Josh Stephney* from Bring The Fallen)
Five Oceans (Patrick Dal Cin from The Tenagens; Based out of London)
Giwakwa (Josh Stephney* from Bring The Fallen)
Infinity Grinder (Brad Griffith from SBD)
No Arrow (Dann Pichette from SBD)
Paterson Hall (Josh White, Jesse Harding, and Patrick Bonne from The Tenagens; Based out of Ottawa)
RedD Monkey (Joe Bumbacco from The Fury)
Shit Liver (Mike Kyle from Bring The Fallen' lineup that night)
Sykotyk Rampage (Tony Briglio from The Fury)