Members: (This information may be incomplete. E-mail me at robertfigures@outlook.com if you know of any omissions or errors to their lineup!)

Info/Analysis: Lorax were a short lived local hardcore band who were active in the summer of 2009 under differing names. Launched in April 2009, they played perhaps their only concert on June 11th of that year under the name Loyalty Is Dead at The Oddfellows Hall as openers for Today, I Caught The Plague, at a show that frontman Jeremy Hannah promoted. They followed that up with lineup & name changes, going by the names It's Just Me and, finally, Lorax through July 2009. Hyping themselves as having "in your face rockable music that will stick in your head for hours", their brief run saw no further concerts take place, though they were advertised to open for Vancouver hardcore band Callahan that August at a pair of later-cancelled gigs. The last real band updates would come to their Facebook group in September 2009, and Lorax are presumed to have went inactive that fall, though most band members remain active in the local music scene, and Jeremy & Nathan have worked together in some music projects since as well. It's hard to critique Lorax, with only a 27 second clip of their song "Uninvited" on their MySpace page to go by, but Jeremy's singing is nice and melodic, and the band have the heaviness down from what we can hear! There's promise in Lorax's lineups, but I wish I had more to go on. Still, check out their lone audio clip below, and check out the members' current projects at the above links!!

Members: (This band's lineup may be incorrect. E-mail me at robertfigures@outlook.com if you have any additions or corrections!) 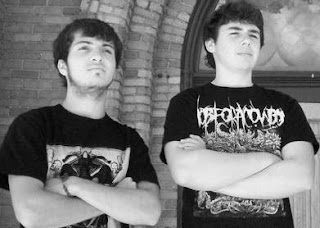 Info/Analysis: Hands of Betrayal were a short lived death metal project that was active in Sault Michigan in late 2008, launching that August. No biography or real band information was posted on their MySpace page beyond their genre and members' first names, but through some research, I've found that this band was likely a successor of sorts to the defunct local death metal band The Slackjawed Rats, of which members Mike Libertoski & Jared Lucas were also a part. Hands of Betrayal never appeared to take off beyond demo postings, and they last logged into MySpace in January 2009, likely dissolving early that year. I wish I knew more about Hands of Betrayal, but at least their two posted demos ("Demo Incomplete" & "Demo 2") show promise! Neither cross the 95 second barrier in length, but Mike's guitar work is on top technical form, Jared has some good bass lines, and I like the spacey effects added on the second demo! That said, the vocals we get are minimal, and the drums could be clearer, but from the little we get, you can hear the talent within! Check out both demo clips (which I've uploaded into one combined YouTube video due to their length) below!