Here's a new news post for your Friday evening reading, and it includes some details on a big out of town concert event this summer, a new music video, and leading off, lots of information on the newest artist to be added to our links on the SMS. Here's what you should know!

In an admittedly belated addition to our Sault Michigan band links, let's finally roll Banned frontman Alex Traynor's solo project into our full coverage! A regular sight in our E.U.P. stories and concert previews throughout the 2010s via his work with his Kinross classic/hard rock trio, Alex has been performing solo as a permanent endeavour since at least March 2017, but I hesitated to include him in our full coverage before as his solo music seemed to lean softer than Banned. From what I've heard, that's no longer the case, so what should you know about Alex as a solo artist? Long-time Banned fans may recall them playing originals of Alex's in the past, but they appear to solely focus on covers now, while Alex posted his own solo covers & occasional audio original demos throughout 2017, not to mention increasingly frequent acoustic solo gigs across Northern Michigan. For what it's worth, Alex himself moved to Mount Pleasant in late 2017, though he & Banned still play live in our area often. 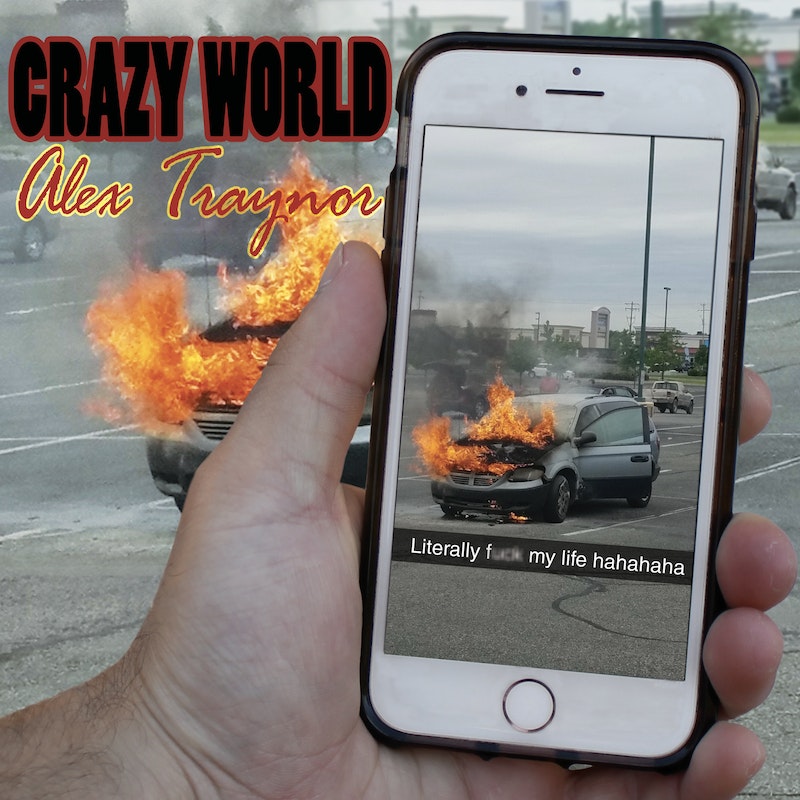 Last fall, Alex hit the studio to record his debut EP "Crazy World", which was successfully released online on March 1st via his official website & iTunes for $10, while you can stream the whole thing on Spotify and Soundcloud for free if you are so inclined. Not to mention, Alex has already released two professionally shot music videos for songs from "Crazy World" to his YouTube channel, including the title track and, as embedded below, his brand new video for the very Avenged Sevenfold-esque "Jack O'Lantern". His prior videos there were a "Crazy World" promotional clip and a surprise cover of Britney Spears' "Oops, I Did It Again."  At this juncture, I am definitely leaning towards reviewing Alex's debut EP on the site this month, which would be our first non-SweetKenny review of a Sault Michigan-area album in over 6 years, so keep tabs for updates on that front! Naturally, I'll hold full thoughts until then, but 3 of the EP's 5 songs are definitely heavy in tone.

Given Alex's frequent line blurring of his solo work and Banned gigs on social media (as well as Banned's online presentation focusing solely on Alex), it's almost a wonder why "Crazy World" wasn't advertised as a Banned EP, but Alex is a very talented musician who built on his adolescent promise very well, and it's great to see his solo career going well in the Central Lower Peninsula, plus frequent trips home! Stay tuned for much more on Alex's solo work, including unplugged gigs of his up here, and here's the "Jack O'Lantern" video! Creative visuals, this would be perfect at Halloween!

Next up, Sault Ontario Celtic punk quintet Dustin Jones & The Rising Tide released their own new music video to the Tidal Records YouTube channel on Wednesday! This is for "Lost & Found", the first single from The Tide's forthcoming fourth studio album, and the description confirms that the song (and CD, I assume) was mixed by Kyle Whittaker at Strange Pumpkin Studio in St. Catharine's, who previously handled releases from local artists like Northwest, K.I.C.K., and Brendan Hodgson. The video proper was shot by young local filmmakers Avery Obeng & Matt Hroch, and it is The Rising Tide's first in 7 years, and their first with their current lineup. I'll hold full comment on the song until the album release, but the video is fairly straightforward, with the guys performing the song on a dark soundstage with deliberate lighting. Well filmed and put together, and Tide fans won't want to bypass this one, so give it a watch below!

Finally for today, I wanted to acknowledge the big Elliot Lake concert festival going down at their airport this summer, as while Elliot Lake is 2 hours from Sault Ste. Marie (an hour past the end of our coverage range), a good amount of local artists will be performing. Entitled Atomic MusicFest, this special event will take place from August 9th-11th at the Elliot Lake Municipal Airport, and it will feature bands on all three nights, leaning primarily to metal acts in the headline spots. The Friday, August 9th lineup will feature the out of town debut of local Tool tribute quartet Parabol as headliners, alongside punk/metal quintet Jack Spades and uncredited local rappers. Advertised performers on Saturday the 10th will include a couple of bands who've played in the Soo before, like Metallica tribute band Sandman & Sudbury death/thrash metal quintet Archelon, while Redefined alum Jon Rioux sings for the Ottawa-based Pantera tribute band Fantera that same night.

This is an all ages and licensed festival, with $45 weekend passes among other admission tiers, so visit the official website for complete details on how to attend. Kudos to AstroRabbit Entertainment for trying a big festival like this, and while I'm not sure how the tribute band-heavy lineup would play with some fans, this is a huge event for Elliot Lake, and hopefully there's a sizable turnout from Saultites in August! See above for more details, and stay tuned for more news and notes on the SMS soon! Thanks everyone!
Posted by The Sault Metal Scene at 7:00 PM