Where Are The New Albums? March 2019 Update

Background: Though discussion of a debut album had been ongoing throughout 2017, local alt-punk trio A Dire Setback only announced that their first CD was in the works in March of last year. To help fund the recording sessions, A Dire Setback launched a Patreon page to allow fans to help financially back them and the album, with exclusive content and perks promised for backers on there, though public content on their Facebook page has also been released. Around that same time, the guys began setting tempos and recording click tracks for the album, with Pointless bandmates Bill Priddle & Dustin Goodall handling production and mastering, at least partially at Dustin's own Unsalted Audio. Full recording sessions began with drum tracking in May, as noted on Facebook, with vocal tracking winding down as of February 17th. The band posted this photo on Facebook in that could be the possible cover art, while this Rotaryfest teaser features a drum-heavy track that may be included.

Background: In tentative planning since 2014 under this title, local death metal quintet The Bear Hunters have been playing songs intended for their second full length CD for a few years now, but only fully began recording sessions for "The Dead Testament" on October 2nd, 2015. Following a brief fundraising campaign and the gradual unveiling of song titles, the band has been working with producer Dustin Jones at Mission Control Studios, and have shared sporadic updates on their Instagram page. Like on 2014's "Eternal Hibernation", rhythm guitarist Josh Stephney has recorded parts for the album despite living in Southern Ontario. The music video for "I Fear No God" was posted on YouTube on December 1st, marking the first public release of a song from the CD, while the final cover artwork and full track listing order were posted on their Facebook page on February 17th.

Background: After a lengthy hiatus dating back to the summer of 2016, local Celtic punk veterans Dustin Jones & The Rising Tide resumed public activity last spring, later beginning recording sessions by October at Dustin's own Mission Control Studios, as per their Facebook page. The band confirmed that they were indeed recording a fourth studio album (and first in 7 years) in January, which will presumably be released through Tidal Records, and will also be their first album with second guitarist Liam Seymour and drummer Chris Johns. A 22 second teaser of the planned first single "Lost & Found" was posted on Facebook, and a music video was shot for it last month, though further details on it and the album are forthcoming.

Background: Fast rising young blues/hard rock trio Electric Church evolved from Jimi Hendrix covers in 2016 to primarily original material in 2017, and punctuated that on May 12th of that year when they announced on their Facebook page that they were "working up some new songs... for the album!!!" It was confirmed around that time that they were recording material at Mission Control Studios with producer Dustin Jones, who shared a Facebook page photo confirming Electric Church's presence. However, few direct updates have followed publically, aside from scattered reminders in late 2017 that they were still working in studio, and that they "are really excited about all the new projects we have planned."

Background: Arguably better known for their funk, ska, and hard rock covers, local quartet The Elements have been adding original material to their sets since 2015, and have since publically confirmed earlier teases that they are working on a debut EP. Frontman Rob Speers has confirmed in personal conversations in early 2016 that they have been working in studio on the release, which will have at least 5 tracks, and I believe it's being self-recorded, but further public updates are minimal at best. It's also not known if they'll employ any guest performers, such as saxophonist Josh Norling, a frequent presence in recent months. 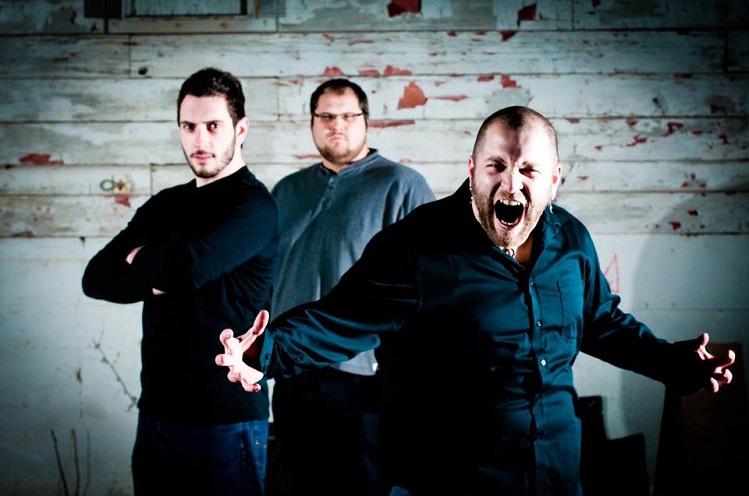 Background: Despite a hiatus from live concerts lasting over 9 years, Gates of Winter never broke up, and are slowly working on their follow-up to 2008's "Lux Aeterna". Updates have sporadically been made since early 2010, via numerous uploads, teaser postings, and general hype for the recording sessions, though prior release forecasts haven't been realized, it was retracted from CD to EP length, and most preview media has since been taken down as the band perfected the CD's final content. While Sault native Jon Morrison was announced as the album's drummer in late 2010, it has since been confirmed that "Perihelion" will feature programmed drums. After taking a over a year off from public activity, Gates of Winter resurfaced in July 2017 with new band artwork and hints that they have "been making incredible strides, and are very excited to pull back the curtain."

Current Release Status: Personal commitments and the like have slowed things down incredibly, but the band has repeatedly acknowledged continued work towards the release in scattered postings throughout the 2010s. The band's Facebook page was admittedly taken down in mid-2018, despite a personal Facebook video of members jamming from April, but given their already measured public updates and prior year-long public hiatus from 2016-2017 without dissolving, I am hesitant to make a judgement on their status. If still alive, remember that good art takes time, and Gates of Winter won't want to release this until everything's perfect and to their high standards. Keep an eye out for potential updates!
----------------------------------------------------------------------------------

Background: Not long after their successful Ontario tour with Mike Mikus in late 2016, Id Iota began recording sessions for their second album, though public confirmation that a full length CD was currently in progress didn't occur until guitarist Dustin Goodall announced it on his studio Unsalted Audio's website in early 2017. Scattered postings and hints have followed, but nothing else has came out beyond performances of newer originals in concert through last summer. For reference, this photo got shared a few times on Id Iota's Facebook page last year, but it's unclear if it's intended to be the album's cover artwork. It is not clear whether new bassist Robert Sartini and/or his predecessor Dan Linklater will be on the final product, or if any collaborations with RedD Monkey alum Pete Mozarowski will make the cut.

Rumoured Songs: "From The 55th Parallel", "Over Indecision", "The Nature of The Times","An Act of Strength","The Catalyst", "Dangerous Town", "Come on Home", "Blue Highway", "Everything Not Saved Will Be Lost", "Bridges"

Background: After moving to Thompson, Manitoba in November 2017 for work reasons, prolific local/Windsor hard/alternative rock musician Mike Haggith relaunched his dormant solo project, and soon commenced songwriting for a new CD, which will be his 50th canon studio album and his first since 2015's "The Warinside" Updates slowly took place across 2018, with his Facebook page documenting songwriting sessions and acoustic "home demo" videos of new original songs, plus occasional solo concerts in Thompson largely featuring these new tracks. Mike has unveiled the official title as "Bridges", along with it's cover artwork and track listing in September, which includes all of his Thompson-era originals except "If Only You Could Hear Me". The album's first single, "The Nature of The Times", was released to online music download and streaming services in November, with a music video for that song also forthcoming, while the title track gets a single release on Tuesday.

Background: Shortly after releasing his first two solo albums ("Ultimate Chaos" & "Apocalypse") in March, former Skull After Betrayl frontman & Bear Hunters guitarist Mike Vincent indicated that he had begun preparations for a third solo release. With no public Facebook page for his music at press time, Mike revealed on his personal Facebook page in September that his third album would be titled "For Dear Life", with an instrumental demo of it's first song "Nocturnal" being posted to his Bandcamp page. Unlike on his prior releases, "For Dear Life" is expected to feature vocals on all but one track, in a possible throwback to Mike's singing work with both Skull After Betrayl and D.O.T.H..

Background: After previously breaking up in mid-2014, local metal band Pillory returned as a trio in the fall of 2015, trading their thrash metal roots for a heavier death metal sound, complete with a completely overhauled setlist with no carried-over originals from their 2013 debut EP. In March 2017, Id Iota guitarist Dustin Goodall's recording studio Unsalted Audio revealed that they were in pre-production for Pillory's second album, with the band confirming that sessions were underway that summer. As of last July, drum tracks were complete, though it took until November 2018 for the band to confirm that guitar tracking was underway, with vocals & mixing to follow. It's not clear who will provide bass tracks on the final product, between ex-bassist Jordan Leach, his replacement Blair St. John, frontman Robert Sartini (who played bass on their first EP), or a combination therein.

Background: After a two year hiatus for his solo project (previously known as Animas, April Eyes, and By The Gods), local guitarist Mitch Sirie's solo project The Sorrow Fields resumed public activity last February via recording sessions at Mission Control Studios with producer Dustin Jones, where his band The Bear Hunters also recorded their new CD. An actively maintained social media page for The Sorrow Fields has not followed suit, but Dustin did say that he was "stoked" by the guide tracks, and tracking was reportedly underway in January. Posts on Mitch's personal Facebook page have implied that the project's current form will be much softer than his death metal band work.

Current Release Status: With tracking reportedly underway, this year has to be at least targeted, but given that Mitch has kept all of his own promotion for this album on personal accounts, it's anyone's guess how fast this will come out (also, remember how Mitch's prior attempts at solo albums never saw their intended completion.) It'd be great to see both The Sorrow Fields' debut and "The Dead Testament" on sale this year, and hopefully things progress the right way for both in the coming months!
---------------------------------------------------------------------------------
I hope you guys liked this month's "Where Are The New Albums?" post! This series is scheduled to return on or around April 2nd, while our next monthly feature post will likely be this month's Defunct Local Band Profile one week from tomorrow! That's all for today, but stay tuned for a new post of some kind tonight! Thanks everyone!
Posted by The Sault Metal Scene at 12:00 AM